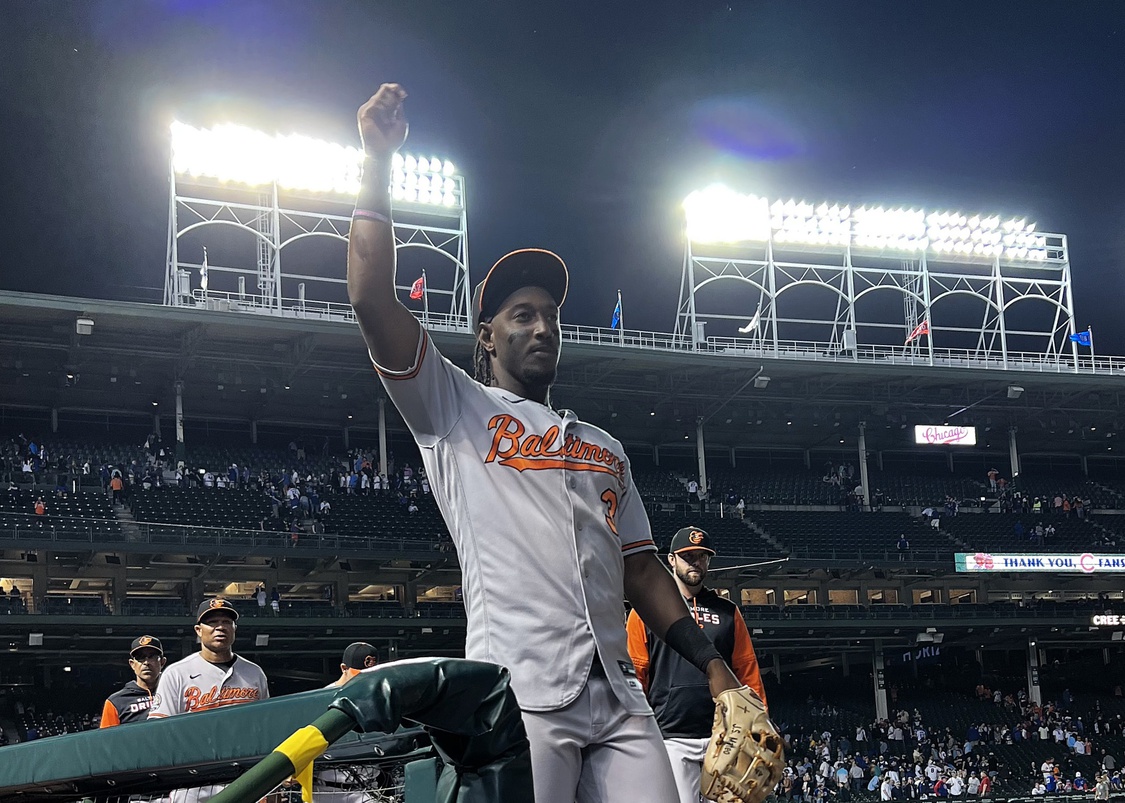 It’s time for the second part of our monthly mailbag. Part 1 appeared on Friday. Questions may be edited for clarity, length and style.

Question: Rich, what do you believe should be a reasonable expectation for O’s fans for next season? A playoff berth, a division title, even a World Series? I know they don’t have to play as many division games but so do the rest of the teams. The O’s were the only team in the division with a losing record against all other division teams. After such an exciting, uplifting season, next year could potentially be a disappointment if expectations are too high. From: Dave Gruber via Facebook

Answer: Dave, I think Oriole fans will be disappointed if the team doesn’t make the postseason next season. We don’t know what the Orioles and the other teams in the American League are going to look like next year, but with full seasons from Adley Rutschman, Gunnar Henderson, DL Hall and Grayson Rodriguez, fans will be expecting a playoff team.

Question: Oriole hitters too often seemed unable to drive in runs with men on base. How many men did the Orioles leave on base? How does that  compares with other American league teams. Can you tell us how many games the Orioles won, when the number of men left on base was five or fewer versus six or more? Does anyone connected to the team see this as a problem and what can be done to improve? From: Mike Berney via email

Answer: Mike, let me answer your second question first. I’m not sure there’s a correlation with number of runners left on base and wins and losses. When the Orioles left 11 or more runners on base, they were 10-5. When they left four or fewer, they were 13-19. The problem wasn’t runners left on base. They ranked 16th. The teams that ranked highest were the Padres, Dodgers, Mets and Guardians.

Question: Has anything happened with the Orioles’ facility in the Dominican Republic? From: Derek Roberts via email

Answer: Derek, the Orioles began constructing their facility in the Dominican Republic about a year ago, and it should be completed in the next several months.

Question: Why was Mike Yastrzemski never called up to the Orioles while he was in their minor league system? He always had good numbers compared to other players that were called up to Baltimore. In the time that he has been with the San Francisco Giants he has done fairly well. From: Greg Haynes via email

Answer: Greg, I’m not sure why Mike Yastrzemski was never called up by the Orioles in 2018. They had a lot of outfielders ahead of him on the depth charts — Austin Hays, Cedric Mullins, Anthony Santander and DJ Stewart. Hays, Mullins and Santander are several years younger than Yastrzemski, who’s 32. He hit .214 with the Giants this year, and the others hit better.

Answer: Damon, Hall, and Henderson maintain their rookie status for 2023. Stowers and Vavra do not.

Question: Who would be your top 4 or 5 free-agent targets for the Orioles to consider to help with starting pitching next season?  I believe the farm system has and will continue to promote solid position players the next few years. Will the Orioles really go after at least one quality starter to help the pitching staff in 2023, or are we still shopping in the bargain bin looking to uncover something nobody else knows about?  From: Mike Kelly via email

Answer: Mike, I think the Orioles will take a step up in quality in searching for free-agent starters. Here are some names that could be considered: Tyler Anderson, of the Los Angeles Dodgers; Chris Bassitt and Carlos Carrasco, of the New York Mets (the Mets have an option on Carrasco for 2023); and Nathan Eovaldi and Michael Wacha, of the Boston Red Sox.

Question: What is your view on the health of the sport?  Do you think the new rules will help grow it? From: Seth Mendelsohn via email

Answer: Seth, I’m hoping that the new rules, particularly the pitch clock, make the game more watchable for avid and casual fans. There’s no reason that a 3-1 game should take 3 ½ hours to play. The playoffs have been entertaining, but the games are still too long. Baseball has been too slow to change rules when it needs to. The NFL and NBA regularly tweak rules when there’s a need, and baseball needs to as well.

Question: Why do the Orioles struggle against left-handed pitchers when they have good right-handed hitters? From: Alan Riester via Facebook

I don’t know the answer to this, but it’s interesting that three of the young hitters they brought up during the season — Gunnar Henderson, Kyle Stowers and Terrin Vavra — are all left-handed hitters, and Adley Rutschman, a switch-hitter, hits better as a left-handed hitter.

Question: How do you foresee Jorge Mateo and Cedric Mullins faring in the Gold Glove voting? From: Rob Ewing via email

Answer: Rob, that’s much more difficult to forecast than the other awards because it’s not done by writers but by coaches and managers, who can’t vote for their own players. Sabermetric components comprise 25 percent of the vote. I’ll guess that both Mateo and Mullins have a good chance to win at shortstop and center field, but we’ll have to wait until next month.

Question: Why do you think that Aberdeen’s attendance hasn’t been strong? What is the magic pill to turn around a minor league team’s attendance? From: Stephen Brady via Facebook

Answer: Stephen, according to Ballpark Digest, the IronBirds ranked 99th out of 120 minor league teams, and ninth among 12 South Atlantic League teams. Aberdeen came within a game of winning the SAL championship, so a winning team isn’t a factor.

I’m not an expert on the minor leagues, but with the Orioles nearby, perhaps fans decided to spend their money watching some of the players who have recently come through Aberdeen in Baltimore instead. Most minor league executives say that good promotions are the key to minor league attendance. Aberdeen is certainly a fun and inexpensive baseball experience, so I’m not sure what the answer is.

Question: Do you think the Orioles would consider bringing back Jorge López for bullpen depth, and go after Chicago’s José Abreu to give them a  run producer;  he would be a good  fit. From: Mark Cooper via email

Answer: Mark, Greg Fuchs also asked about reacquiring Jorge López. I think it’s unlikely that López will be an Oriole in 2023. He didn’t come close to duplicating his first-half Oriole success with Minnesota, and while it’s possible that the Twins could non-tender him, I think it’s probable he stays in Minnesota. López isn’t eligible to be a free agent for two more years.

Abreu is an interesting name, but he’ll be 36 before next season starts, and I think he’d only be an option on a short-term deal.

Question: Have the rules governing compensation for signing free agents changed under the new collective bargaining agreement?  If the Orioles sign a free agent who had declined a qualifying offer, would the Orioles forfeit a draft pick? If so, which draft pick? From: Craig Russell via email

Answer: Craig, because MLB and the players’ association couldn’t agree on the terms for the international draft, compensation remains for players who are tendered a qualifying offer. If the Orioles sign a player given a qualifying offer, they would forfeit their first draft pick. I don’t see that happening.

Question: What rookies do you expect to be in Baltimore next year? From: Tim Stevens via Facebook

Answer: Tim, I expect DL Hall, Grayson Rodriguez, Gunnar Henderson and perhaps Jordan Westburg to be with the Orioles to begin 2023.

Question: Do you foresee changes in the Orioles’ broadcast crew? I wasn’t sure at first, but I have come to appreciate Kevin Brown and Ben McDonald. From: Vince Celano via Facebook

Answer:  Vince, I don’t normally answer questions about broadcasters because I’m friends with several of them, and I like and admire all of them. I’m also not a television or radio critic, and since I’m at most games, fans at home are more accurate critics than I am. But I have heard many good things about Kevin and Ben’s work, and when I’m not traveling to away games, I’ve enjoyed their work very much.

Question: What do you think is the longest and highest dollar contract the Orioles will offer? Based on that, who can the Orioles acquire in the free-agent market? And, does having minor league talent available help bring more opportunity in the trade market? From: Rick Staley via Facebook

Answer: Rick, I’m as intrigued as you are to see what sort of contract the Orioles would offer a free agent they wanted, and I can’t guess at what it might be. I think the talent they’ve accumulated in the farm system can help them acquire the type of talent they’re looking for in the offseason.

Question: How much financial flexibility does general manager Mike Elias have? Has anything really changed? From: Mark Eisner via email

Answer: Mark, I think Elias was waiting until the Orioles were ready to contend to spend money in the free-agent market, and I’m eager to see how they might do it. They’ve already invested in technology and the international market, so now it’s time to invest domestically. I don’t think the Orioles will be the highest spending team in the free-agent market, but they’ll be players, and they haven’t done that before under Elias.

Question: Will the Orioles consider making an offer to Aaron Judge because of the numbers he’s put up at Camden Yards? From: Luis Eduardo Henríquez from Venezuela

Question: Given the depth of the infield prospects, could the Orioles package Jorge Mateo in a deal for a pitcher? From: Cristian Sena from the Dominican Republic.

Answer: Cristian, I think it’s more likely that the Orioles use the infield prospects in a trade for a pitcher than Mateo, but it’s possible.

Question: With Kyle Stowers, Colton Cowser, and Heston Kjerstad looking like the future, or even adding a free agent, could you see the O’s moving Mullins or Hays? From: @MojoTilley

Answer: Mike, I think it’s possible that the Orioles move either Cedric Mullins or Austin Hays. I think Hays is more likely to be traded than Mullins.

Question:  I am particularly impressed with Adley Rutschman’s team spirit, which is especially visible at the end of each inning and at the end of the game when he greets the pitcher. Do you think anyone will ever put together a highlight reel of such scenes? From: Judy Pruce Funk via email

Answer: Judy, I’m sure they will. Rutschman is such a popular player that I’m positive many others besides yourself would enjoy it.