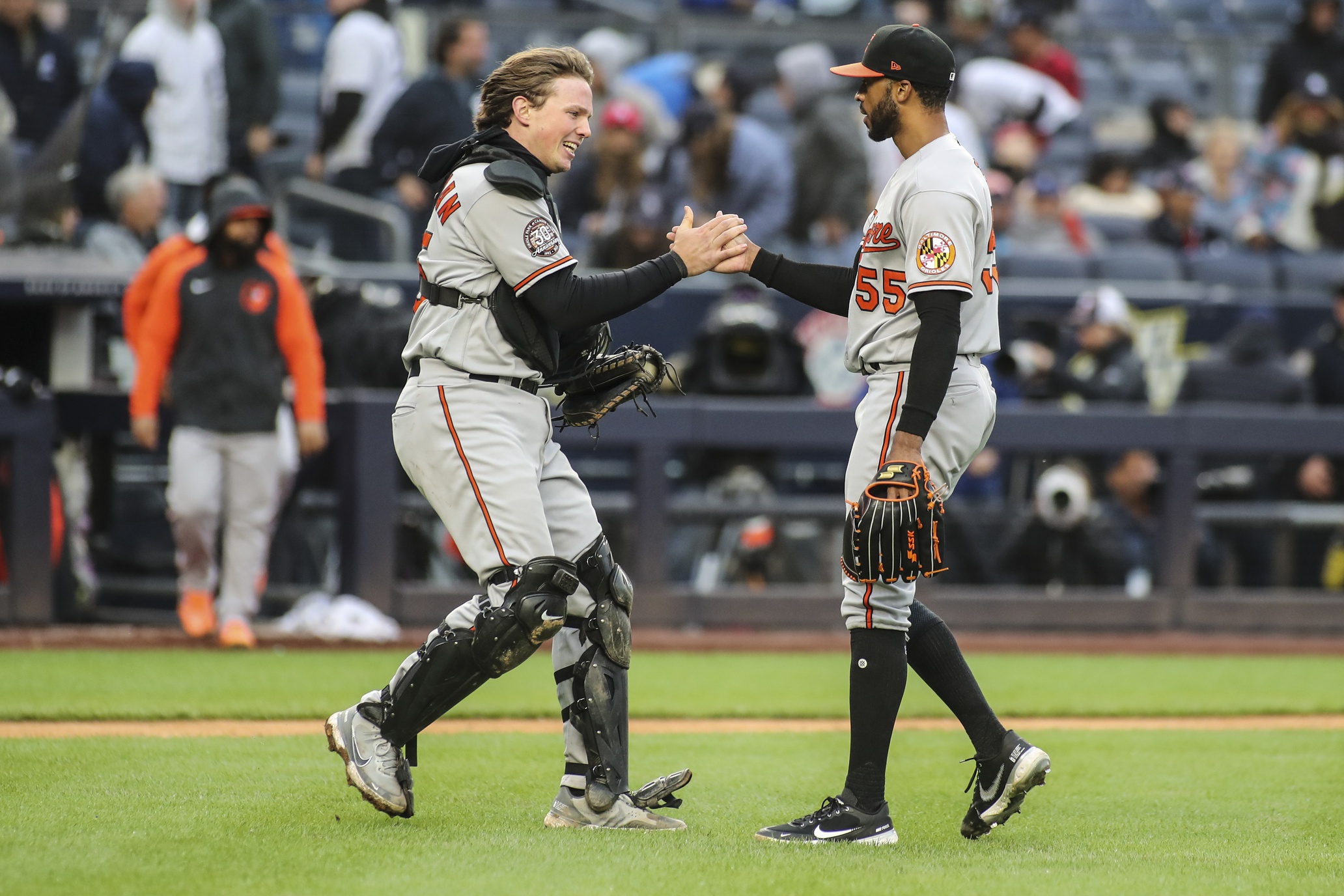 NEW YORK—The Orioles accomplished their goal on Sunday. They secured their first winning season since 2016 and prevented Aaron Judge from hitting his 62nd home run.

Judge, who tied Roger Maris’ 61-year-old American League record with his 61st home run on Wednesday at Toronto, struck out three times and walked in the Orioles’ 3-1 win over the New York Yankees before an announced crowd of 44,332 at Yankee Stadium.

Judge was 1-for-7 during the three-game series, striking out six times, walking five times and was hit by a pitch. New York (97-61) concludes the regular series with four games at Texas beginning Monday. The Orioles return home to play their final three games against Toronto.

“I think we pitched extremely well against him,” manager Brandon Hyde said. “He didn’t beat us in the three games. We pitched him extremely tough, especially today. He’s a great player. He’s having an incredible season, a record-breaking season, and I’m pulling for him in Texas.”

The Orioles (82-77), who won two of three this weekend, and Yankees played in light rain, wind and chilly conditions and before another crowd eager to see history.

Oriole starter Kyle Bradish struck out Judge leading off in the first inning, and with the bases loaded in the second. Bradish thought he had Judge struck out on the pitch before the strikeout, but it was called a check swing, and he pantomimed Judge’s swing.

“That’s part of being a competitor,” Bradish said. “It was bases-loaded, best hitter is up. I thought I had him. I think a lot of people thought I had him. [Home plate umpire Ryan Additon] said, ‘no he didn’t go.’ I was a little frustrated. All it takes was the next pitch for him to hit one out, and it was 4-1. Luckily, I was able to come back with a good curveball and get him out.”

Bradish walked Aaron Hicks and Judge to start the fifth, then threw a wild pitch with one out. Adley Rutschman’s throw to second was wild, allowing Hicks to score to tie it at 1-1.

“It brings the best competitor out of me facing Judge,” Bradish said. “He’s the best hitter in the league right now. Just tried to attack him. He has his zone where you want to attack him, executed that. It was a fun game to pitch.”

Oriole reliever Bryan Baker struck out five of his six batters, including Judge for the second out of the seventh on a 99-mph fastball.

“I really just thought about it as a 3-1 ballgame,” Baker said. “I was just trying to maintain that lead. Got the first out of the inning, which was big. Having him up without runners on base was a little freeing, I think, so obviously you’ve got to be careful with a guy like that. Tried to pitch as careful as I could and then tried to pick my spots to go into the zone and it worked out well.”

Baker said his focus was on protecting the lead.

“I thought about it as a two-run ballgame when he stepped into the box,” Baker said. “Trying to maintain our lead was the main thing I was thinking about.”

An RBI double by Ryan Mountcastle scored Rutschman against Yankee starter Chi Chi Gonzalez in the first for a 1-0 Orioles lead.

The Orioles had second and third after Mountcastle’s double, but Gunnar Henderson and Austin Hays struck out.

Rutschman doubled in the second with one out, and Anthony Santander and Mountcastle flied out.

In the fifth, Kyle Stowers led off with a double, and Rutschman walked with two outs. Lucas Luetge struck out Santander to end the inning. Santander argued vehemently with Addition’s call and Hyde came out to intercede.

Hays doubled with two outs in the sixth. Terrin Vavra walked and Stowers was hit by a pitch. Jorge Mateo hit a shot to Josh Donaldson at third, who threw to first for the third out.

The Orioles, who have struggled throughout the season with situational hitting, were 1-for-12 with runners in scoring position and left 12 runners on base.

Bradish was taken out after he walked Oswaldo Cabrera to start the sixth. With runners on second and third and one out, Jose Trevino lined to Vavra at second, who threw to third to double up Harrison Bader, and it was 1-1 after six.

“It’s everything,” Bradish said. “Nobody wants to have a losing season. This being my first year [it was] everything I could have wanted to be a part of. The culture that we’ve had this year from the top down has been awesome to be a part of.”

The Orioles scored two runs in the seventh against Aroldis Chapman (3-4) )when Cedric Mullins led off with an infield single. Rutschman and Santander walked. Mountcastle was called out on strikes.

Henderson walked to score Mullins, and Hays hit a sacrifice fly to score Rutschman for a 3-1 lead.

Dillon Tate pitched a perfect ninth for his fifth save.

Hyde wanted the Orioles to finish with a winning record.

“It’s an accomplishment, definitely from where we came from last year,” said Hyde, whose Orioles were 52-110. “Thirty-win difference and still got a few games to go. Proud of our guys for the season they’ve had. Good to win a series here, good environment, people watching with the Judge record. Happy with how our team played today.”