Orioles held to 3 hits in 8-0 loss to Yankees; Judge still at 61; Lyles hopes to return in 2023 - BaltimoreBaseball.com 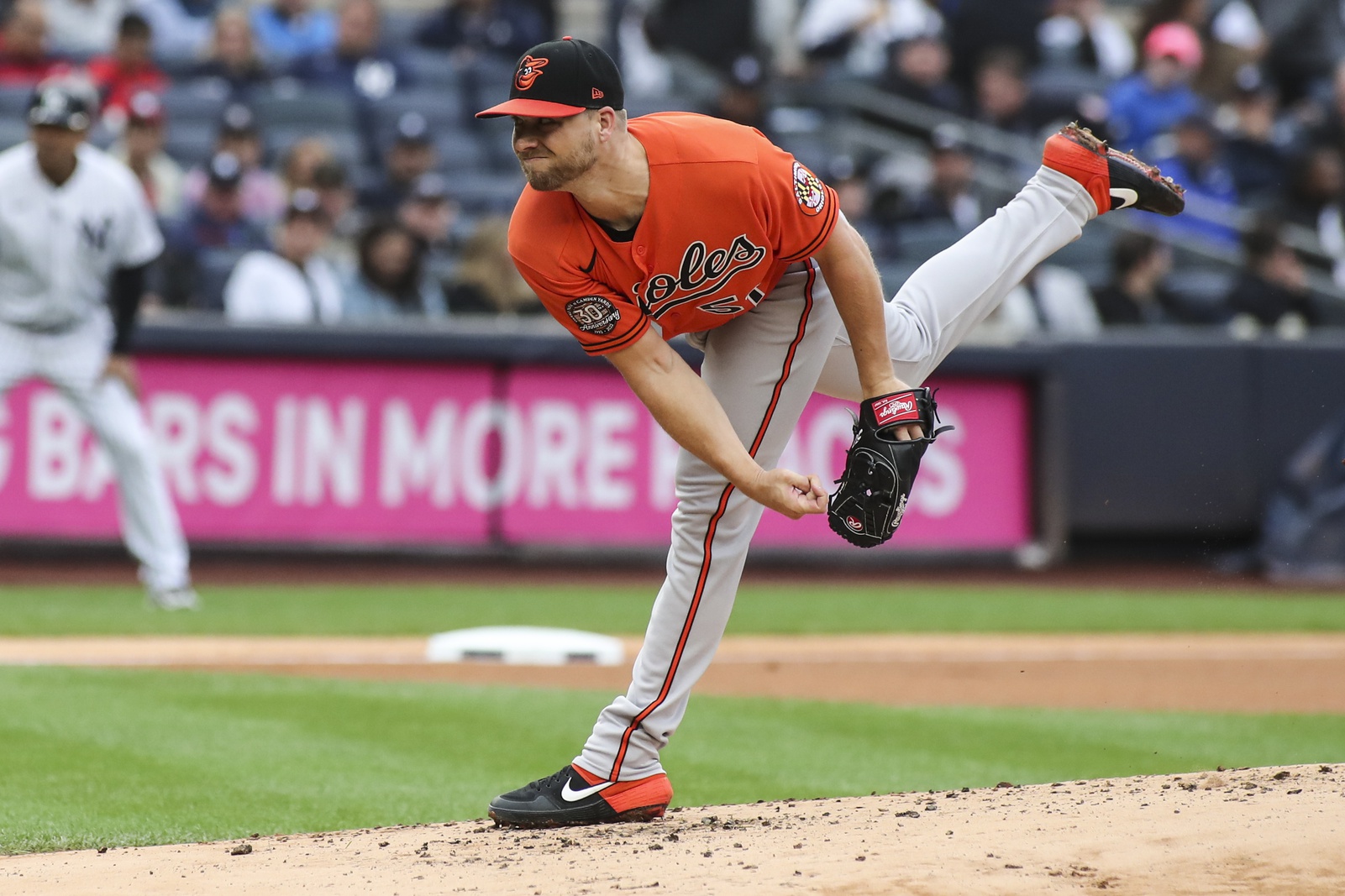 NEW YORK—Aaron Judge failed again in his attempt to hit his 62nd home run on Saturday, and the Orioles didn’t hit much at all. Judge struck out twice, walked twice and was hit by a pitch in the New York Yankees’ 8-0 rout of the Orioles before an announced crowd of 45,428 at Yankee Stadium.

Oriole starter Austin Voth nicked Judge with a pitch in the first inning, walked him in the second and struck him out in the fourth. Judge, who tied Yankee slugger Roger Maris’ 61-year-old American League home run record of 61 on Wednesday in Toronto, walked against Spenser Watkins in the seventh and struck out against him in the eighth.

“Whenever you face a lineup with that type of hitter, there’s one batter that you don’t want to beat you,” Voth said. “You attack him with nobody on and with somebody on, you’re a little more careful. That’s the gameplan that I took forward.”

When Watkins went to a 3-0 count in the eighth against Judge, fans booed. Watkins had walked him in the previous at-bat, much to the displeasure of the home crowd.

“We all had an idea going into the series what it was going to be like,” Watkins said. “Our plan of attack was to hit certain locations. If only we could be perfect every single pitch. There wasn’t any sense of trying to be reserved or not go after him. I was trying to locate in certain spots. He’s a dangerous hitter. If you leave anything over the plate, he’s going to do damage.”

Watkins said he tried to keep his focus on getting Judge out.

“The situation was there,” he said. “Of course, it was presented. Just like any other competition, I approached it as I was going to go in and approach it as best as I can. What an incredible feat he’s accomplishing. It’s impressive to watch. I don’t think it ever crossed my mind that I don’t want to be the guy.”

“I get it,” manager Brandon Hyde said. “You want to see something special. It’s a cool moment. Our guy on the mound is trying to do his job, also. We’re not trying to walk him. We’re trying to pitch him carefully.”

Yankee starter Nestor Cortes (12-4) simply dominated the Orioles. The All-Star left-hander allowed one hit in 7 1/3 innings. Jorge Mateo, who also walked, singled with two outs in the fifth. Cortes matched his career high with 12 strikeouts. He also struck out 12 Orioles on April 17th. He had the Orioles chasing pitches out of the strike zone consistently.

“You’re going to look flat when a guy’s carving you up,” Hyde said. “We just had nothing going on [against] Cortes. Give him credit. He’s pitching outstanding right now. We’re just not hitting the ball very hard against him.”

“His stuff was on point today,” Henderson said. “He was locating pretty well. His fastball was playing up and he was able to change arm angles and still keep it in the zone. It was pretty tough, pretty much facing two pitchers. You don’t know which one is going to come. His stuff was working today, and he had it all.”

Yankee reliever Jacob Barnes allowed a single by Ryan Mountcastle and double to Adley Rutschman, his 34th, in the ninth, but it wasn’t enough for the Orioles to avert their 11th shutout.

The Orioles (81-77) were eliminated from playoff contention early Saturday morning and need a win in their final four games for their first winning season since 2016.

Voth (5-4) gave up three runs in the first on an RBI double by Gleyber Torres, a sacrifice fly by Josh Donaldson and a 447-foot home run to Giancarlo Stanton,  29th.

Kyle Higashioka homered in the second, and it could have been worse had Oswald Peraza not been called for leaving third base too early when he tried to score when Mullins made a diving catch on a bloop by Torres.

Voth allowed four runs on seven hits in his final start of the season.

Watkins allowed four runs in the seventh on RBI singles by Torres and Donaldson, and a run-scoring double by Harrison Bader. Torres scored when catcher Robinson Chirinos threw to second to try to nab Donaldson, who took the extra base on an errant throw home by leftfielder Ryan McKenna. Chirinos was up the first base line when he made the throw and Torres realized no one was covering the plate. Both McKenna and rightfielder Austin Hays missed cutoff men on their throws, and the Yankees took advantage of the mistakes.

Judge was taken out after his fifth plate appearance and the Yankees (97-60) ahead by eight runs. He’ll try for the record-breaker on Sunday. New York concludes its season with four games at Texas.

“He’s having an awesome season, man,” Voth said. “At the end of the day, I’ve got to be the guy that gets him out somehow. I’ve got to find a way, any way possible.”

Notes: Félix Bautista, who didn’t pitch the ninth inning on Friday because of left knee discomfort, was feeling a little bit better, Hyde said. He didn’t rule him out from pitching again this season. “Possibly, we’ll see how he is day-to-day,” Hyde said. … Kyle Bradish (4-7, 5.11) will face Luis Severino (6-3, 3.41) on Sunday at 1:35 p.m. … The game was delayed by rain for 27 minutes at the start. Total delay time for the season is 16 hours, 2 minutes.

Lyles would like to return: Starting pitcher Jordan Lyles has an $11 million option to return to the Orioles in 2023, and he said he’d like the team to pick up that option. Lyles is 12-11 with a 4.42 ERA.

“I would love to be back here,” Lyles said. “To see what we’ve done here in the last calendar year as an organization, what was expected of us coming into the season and the transition to be where we are right now, it’s pretty special. I enjoy the guys. Hyder has been amazing, definitely Manager of the Year in my eyes, good clubhouse staff. Everything is a positive here. I would love to come [back], yeah.”

Hyde would love for Lyles to return.

“He’s made 32 starts for us,” he said. “To be able to plug in a guy every five days and keep us in almost every single game he pitched. The whole package, he has been absolutely fantastic for us.”

Lyles’ turn would come up on Wednesday, the final day of the season. Hyde said he hasn’t talked to him about a final start. On Friday night, Lyles said he’d like to start again.

“If we didn’t have Jordan Lyles this year, I don’t know what we would have done,” Hyde said.