Orioles defeat Yankees, 2-1, to secure .500 season; Judge still looking for No. 62; Hall gets 1st save - BaltimoreBaseball.com 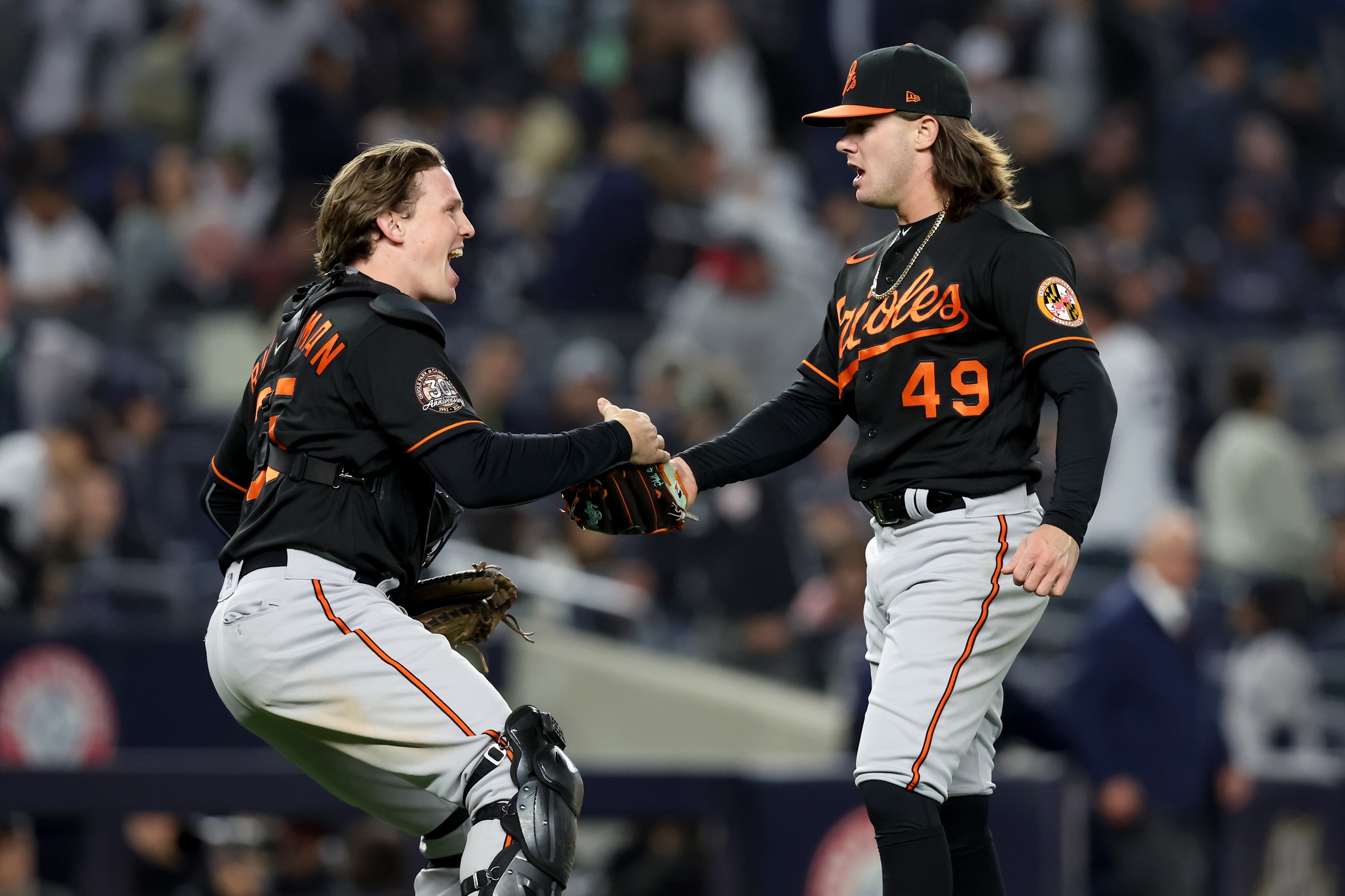 NEW YORK—Aaron Judge didn’t hit his 62nd home run, and the Orioles secured at least a .500 season with a dramatic win on Friday night.

With the Orioles leading the New York Yankees by a run and Isiah Kiner-Falefa on second and one out in the eighth inning, manager Brandon Hyde walked to the mound to talk with his closer, Félix Bautista, about facing Judge, who on Wednesday tied the American League home run record of 61 that Yankee slugger Roger Maris set in 1961,

Judge, who had struck out in the first, singled to center in the third and walked in the sixth against Oriole starter Jordan Lyles, took two balls before Bautista appeared to stumble on the mound.

After an examination, which included Bautista stretching as he walked toward second base, he threw a third ball to Judge before Hyde signaled for an intentional walk. The sellout crowd of 47,583 at Yankee Stadium booed loudly as Judge trotted to first.

“He’s a great, great player, one of the greatest players of my lifetime,” Hyde said. “And to have the year he’s having. We’re trying to win a game, also, so I have a lot of respect for him.”

Bautista struck out Anthony Rizzo and Gleyber Torres lined to center to end the inning.

Bautista had left knee discomfort but said he could have pitched the ninth inning. Hyde didn’t want to extend Bautista and instead called for left-hander DL Hall, who pitched a spotless ninth for his first save, and the Orioles had their 81st win of 2022, 2-1 over the Yankees.

“I think the big thing for me is not trying to fight the nerves as much as using it to fuel you and ride the wave,” Hall said. “It’s a storm, and you’ve got to embrace the storm, and use it to get you going.”

Hall had warmed up twice.

“Once I saw Félix have a little bit longer inning, I was like, ‘Maybe there’s a chance,’” but I’d already sat down, and [when] they told me I was in the game in the ninth, I was a little shocked, but I was super excited for the opportunity. I feel like big situations like that, you can learn and grown from them.”

The Orioles (81-76) need one win in their last five games for their first winning season since 2016. After going 52-110 last season, they could become the first team since at least 1900 with a winning record one year after losing 110 or more.

“It means we exceeded expectations,” Hyde said. “Our guys fought all year long, and we’re not done yet, just really happy with the effort of these guys all year, proven a lot of people wrong around the league and around sports.”

The Orioles were eliminated from postseason play later in the evening when Seattle defeated Oakland, 2-1.

The 6-foot-8, 280-pound Bautista has been a big reasons for the Orioles’ success.

“It’s nothing serious,” Bautista said through a translator. “I think what happened was on one of the pitches that I threw when I landed, I just felt a little discomfort in my knee. I don’t know how to really explain it other than when I threw the pitch and put force on my leg and I landed, I felt a little off.”

Bautista thinks he’ll be able to pitch in the final five games.

Lyles (12-11) started on three days’ rest because he threw only two innings on Monday and didn’t return after a 1-hour, 40-minute rain delay. He was sharp and allowed just a run on four hits in seven-plus innings, striking out nine.

Judge was the Yankees’ leadoff hitter, and Lyles was ready.

“The atmosphere here at the Stadium, so many people, first batter of the game, it’s go-time,” Lyles said. “Everyone knows what’s going on, the situation … It was fun. It was an amazing atmosphere, probably not an empty seat out there. Us players, we get up for those type of games.”

Catcher Adley Rutschman was the first to greet Judge as he stepped into the batter’s box in the first. “After every swing he took, you could hear audible gasps from the whole entire crowd,” he said. “Every time he swung and just a big buildup, so that was pretty cool.”

Mullins stole second in the seventh, his 34th steal of the season, tying him with teammate Jorge Mateo for the American League lead.

Yankee leftfielder Oswaldo Cabrera tied the score at 1 with his fifth home run in the bottom of the fifth against Lyles.

Germán walked Adley Rutschman and Anthony Santander to start the sixth. Both runners moved up when Mountcastle bounced to Germán.

Former Orioles left-hander Zack Britton, who had Tommy John surgery just over a year ago, relieved German, walked Gunnar Henderson to load the bases, threw a wild pitch to score Rutschman, and was removed from the game because of left arm fatigue.

After Hays hit a leadoff double in the second, the Orioles didn’t get another hit until Rougned Odor singled with two outs in the eighth. Aroldis Chapman picked Odor off to end the inning.

“Excited, happy, fortunate to be part of it,” said the 31-year-old Lyles. “Us older guys might not be here in the future. This organization, the city of Baltimore is definitely in good hands.”

Lyles’ turn comes up on Wednesday, the final day of the season and he said he has yet to discuss it with Hyde.

“I would like to rack up some more innings,” he said.