Oriole players get their visit inside Fenway's left-field scoreboard - BaltimoreBaseball.com 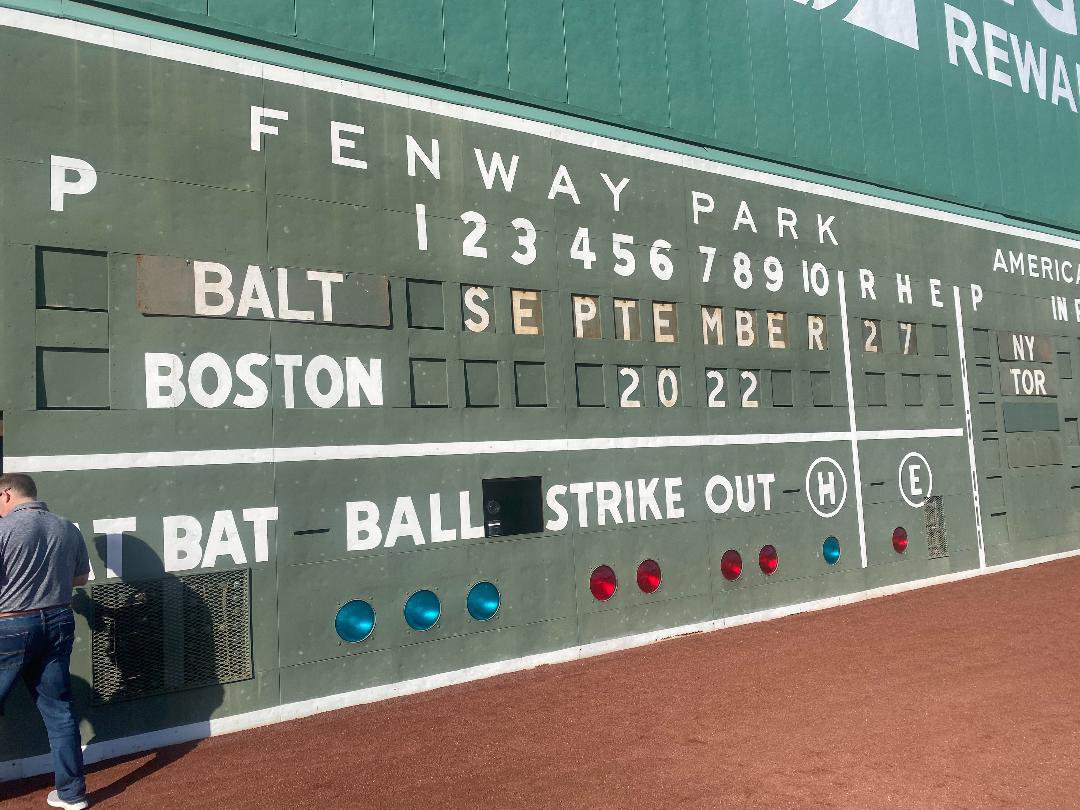 BOSTON—One of the rites of passage for young players is a visit inside the left-field scoreboard at Fenway Park. As they prepare to walk in the door to the hand-operated scoreboard, they’re handed a Sharpie to sign their names inside.

There’s not much headroom or much room at all. On Tuesday, pitchers DL Hall and Jake Reed, infielder Gunnar Henderson and outfielder Kyle Stowers took their turn along with first base coach Anthony Sanders.

There’s so much lore about the scoreboard. Perhaps the most famous story is when an NBC camera operator had to keep moving his position during Game 6 of the 1975 World Series because he was escaping rats. He finally found a safe spot and stuck out his camera in time to capture Carlton Fisk waving his home run ball fair.

“It was pretty cool to go in there and see all the players that have come through there, seeing all the names and stuff,” Henderson said. “All the history that comes with this is really awesome and special.”

Henderson said there was some strategy in finding a place to sign his name.

“We tried to find the area with the least amount of signatures to make it a little more personal to us and it was pretty cool to be able to find a spot in there and have it, hopefully, forever,” he said.

Henderson grew up in Selma, Alabama, and this is his first trip to Fenway.

“You get to see all the history of it … watching the World Series games and the playoff games,” he said. “You’re like, ‘Man, it would be cool to play there,’ and then have the experience to be on that field where all that stuff happened is awesome.”

Manager Brandon Hyde said he has been inside the scoreboard a few times. “Earlier this season, I went with my son inside. My son signed the wall,” Hyde said. Hyde signed the wall when he was a coach with the Chicago Cubs.

“It’s a pretty cool moment to be in there. It’s history in there,” Hyde said.

Akin’s demotion:  It came as a surprise when left-hander Keegan Akin was sent down to Triple-A Norfolk about an hour before Monday night’s game.

“That was rough,” Hyde said. “He’s been a huge part of our bullpen this year. He had a great first year. He’s had good moments in the second half, also, not the results lately. The reason was we definitely needed somebody to go multiple innings last night and we were really short in the bullpen yesterday.”

The Orioles recalled right-hander Logan Gillaspie, who pitched the final 2 2/3 innings of the Orioles’ 14-8 win over the Boston Red Sox on Monday night.

“We had to make a move to get a guy to be available last night,” Hyde said.

Notes: Ramón Urias is back in the lineup at third base after missing two games because of neck spasms. Terrin Vavra, who has been slowed by a hamstring injury, is available, Hyde said. … Mike Baumann will start on Thursday afternoon, Hyde said. … Norfolk’s season ends on Wednesday and the Orioles are discussing if they’re going to add extra players to the taxi squad in case of injuries.