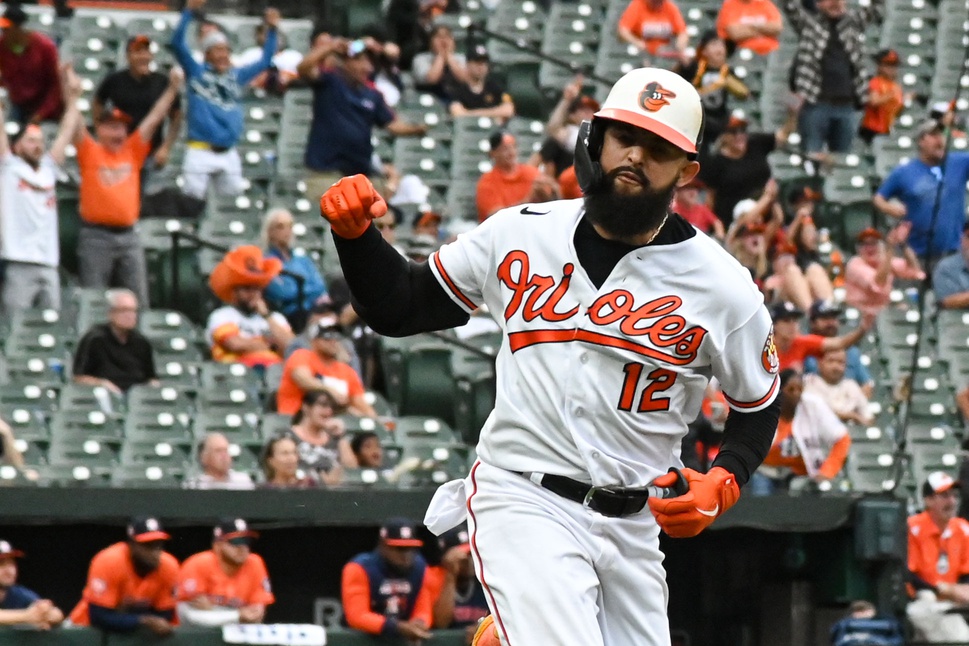 BALTIMORE—The Orioles began a four-game series against the Houston Astros with two brilliant pitching performances. They  ended it with a crushing 11-10 loss on Saturday night, and a disappointing 11th-inning  setback on Sunday.

Houston scored four runs in the 11th inning and defeated the Orioles, 6-3, before an announced crowd of 24,449 at Camden Yards.

The Orioles are 79-73 and trail Seattle for the final wild-card spot by four games with just 10 games remaining. Their four-game split with the Astros was deflating because they allowed the final two games to slip away.

“Disappointing the last couple games,” manager Brandon Hyde said. “We had a tough time out of the bullpen … Just made some mistakes, felt like we made young team mistakes the last couple of games, late in the game.”

In the 11th, with Keegan Akin working in relief, automatic runner Jeremy Peña scored on a sacrifice fly by Yordan Alvarez with the go-ahead run. Jose Altuve walked and Aledmys Díaz singled to set up the sacrifice fly to center.

Alex Bregman was hit by a pitch by Akin (3-3), who walked Kyle Tucker with the bases loaded to give Houston a 4-2 lead. Christian Vazquez added a two-run single off Joey Krehbiel.

Cedric Mullins had an RBI single in the bottom of the 11th.

Houston starter Cristian Javier retired the first 13 Orioles to face him until Ryan Mountcastle singled with one out in the fifth. Terrin Vavra then hit into a double play.

Austin Voth allowed a double to Vazquez to start the third. Chas McCormick singled Vazquez to third, and he scored on a sacrifice fly to right by Mauricio Dubón.

Voth allowed a run on four hits in five innings, striking out six. He remains optimistic despite the math.

“Anything can happen,” Voth said. “We’re right there. We’ve just got to come out tomorrow and keep fighting. This team has a lot of fight. I’m excited for this next series.

“We’ve been pitching really well lately. Timely hitting is coming along well. We just need to keep doing those two things and close the ballgame out.”

In the sixth, Jake Reed allowed a two-out double to A Díaz, and DL Hall was summoned to face the left-handed Alvarez, who singled. Bregman walked, and Hall struck out Tucker for the third out.

Will Smith retired the Orioles in order in the seventh, and Mountcastle doubled against Ryne Stanek with one out in the eighth. Mountcastle moved to third on a fly ball to right by Austin Hays and scored on a single off the right-field wall by Rougned Odor, who appeared to think the ball was going out and didn’t run at first.

“I hit it at the end of the bat,” Odor said. “I just tried to see if it was going to stay in the park or not.”

Kyle Stowers and Jorge Mateo singled to load the bases, with Odor only getting to third instead of scoring. Mullins struck out and threw his bat to the ground and slammed his helmet down in a rare display of public anger.

Yuli Gurriel, who began the 10th inning as the automatic runner, moved to third on a fly ball to right by Vazquez and scored on a wild pitch by Dillon Tate while Trey Mancini was pinch-hitting for a 2-1 lead. Mancini hit a double off the top of the left-field wall, but Peña, who ran for Mancini, was thrown out at third to end the inning when another pitch by Tate hit the dirt but was blocked by Rutschman, who fired a strike to third.

Ryan McKenna, the automatic runner in the bottom of the 10th, failed to advance on a one-out bloop single to center by Austin Hays, the Orioles’ second costly baserunning error. McKenna moved to third and Hays to second on a wild pitch by Neris. Odor got McKenna off the hook with a single that scored McKenna and Hays to third. Stowers struck out on a high fastball and Mateo grounded to short to send the game to the 11th tied, 2-2.

Notes: Ramón Urías, who left Saturday night’s game because of neck spasms, didn’t play. Hyde thinks he’ll be better in a day or two. …The game was delayed by rain for 46 minutes after the sixth inning. Oriole games has been delayed by 13 hours, 48 minutes this season. … Hyde said that Bruce Zimmermann, who started the home opener but has spent much of the season at Triple-A, will be a candidate for the starting rotation in 2023. “I think Zimm’s a guy we’re going to look at next spring.” … The Orioles open a four-game season at Boston on Monday night. Jordan Lyles (11-11, 4.50) will face Connor Seabold (0-3, 10.47).  … Denyi Reyes (0-7) allowed six runs on nine hits in four innings as Triple-A Norfolk lost to Durham, 8-2. Rightfielder Colton Cowser hit his fifth home run and catcher Josh Nottingham his 15th.

Wells done: Starting pitcher Tyler Wells will end the season on the injured list because of right shoulder inflammation.

“It was a little sore after my last start,” Wells said. “And throwing in the bullpen, it was still sore … Obviously, it’s extremely disappointing, honestly kind of heartbroken about it given the fact that we’re chasing a wild-card spot. I want to be able to contribute and continue to help the team, but it wasn’t in the cards this year.”

Wells felt the soreness after his September 19th start, his third since missing nearly six weeks because of a left oblique injury. “If I didn’t feel good enough to come back, I wouldn’t. I felt good, and really the only time this soreness came about was after the last start. I’m happy with the way that I threw most of this year. I think that it’s a good building block for next year.”