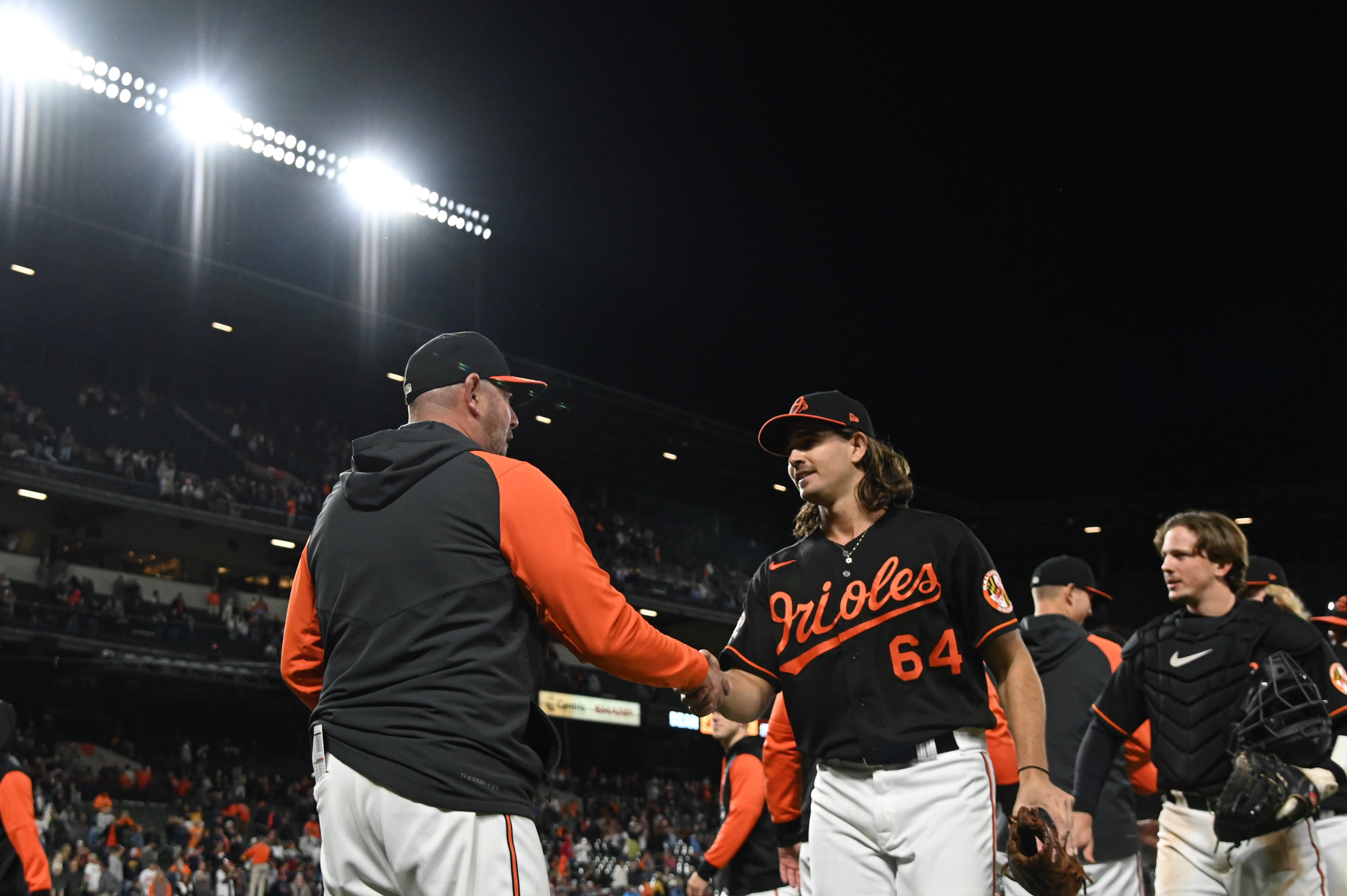 BALTIMORE—Dean Kremer continued the string of outstanding pitching performances by Oriole starters and led them to their third straight win.

Kremer followed standout starts by Jordan Lyles and Kyle Bradish, allowing just four hits and throwing the Orioles’ second complete game in three games in a 6-0 win over the Houston Astros before an announced crowd of 22,833 at Camden Yards on Friday night.

The Orioles scored five runs in the seventh to break open a 1-0 game.

Kremer (8-5) struck out six and walked two. It was the Orioles’ second straight shutout and 15th of the season.

“It is a special night,” Kremer said. “This may not happen ever again in my career.”

Lyles threw a complete game three-hitter in an 8-1 win against Detroit on Wednesday, and Bradish gave up two hits in 8 2/3 innings in a 2-0 win over the Astros on Thursday.

“You’re seeing a guy really mature and learning from experiences and learning how to pitch,” manager Brandon Hyde said. “It’s been really fun. We’re throwing the ball really well. I guess they’ve noticed what Jordan did and tried to follow suit.”

According to ESPN Stats & Info, Oriole starters have pitched 8 2/3 innings in three consecutive games for the first times since Mike Mussina, Scott Erickson and Kevin Brown did it from September 26th-29th, 1995.

“To see Jordan do it and then to see Kyle going into the ninth and for me to do it, it’s indescribable,” Kremer said. “It’s a nice breather for the bullpen.”

On August 27th, Kremer pitched his previous career long 7 2/3 innings in a 3-1 win over the Astros, and then he watched Lyles and Bradish the previous two nights.

“It gave me a hunger,” Kremer said. “OK, it’s possible. Guys are going deeper into games. Watching Lyles do it is special because there’s nothing that rattles that guy. He gets it done every time, and then Kyle has been lights out over the last month, maybe two months. They’re a blast to watch.”

The Orioles (79-71) trail Seattle by three games for the third wild-card spot and have allowed just four runs in five games to Houston (99-53).

“With these high-winning clubs, guys get tentative sometimes,” Kremer said. “They try to pitch around guys. The motto for us this year is: ‘We don’t care who’s in the box.’ Just kind of go after them.”

With just 12 games remaining, Oriole starting pitchers have delivered their three longest games of the season.

Catcher Adley Rutschman hit his 12th home run, leading off the fourth against Houston starter José Urquidy (13-8). Rutschman also hit his 32nd double, tying him with Cal Ripken for the Orioles’ rookie record, a single, walked and stole a base.

Before Wednesday, the Orioles hadn’t had a complete game since John Means threw a no-hitter in Seattle on May 5th, 2021. Now, they’ve had two complete games and came within an out of a third.

In the bottom of the sixth, Mateo broke an 0-for-12 streak with a single. He stole second and, after Rutschman walked, they pulled off a double steal. Mateo’s 33 steals lead the American League

In the seventh, Jesús Aguilar blooped a singled to right, and Austin Hays blooped a single to center to move pinch-runner Kyle Stowers to third. Terrin Vavra singled to left on a checked swing against Hector Neris to score Stowers. Mateo bunted and reached when Neris made a wild throw to first.

Cedric Mullins lined a single to center to score Hays and Vavra. A double down the left-field line by Rutschman and a solid single to left by Mountcastle brought home two more to give the Orioles a 6-0 lead.

“I wanted it really bad,” Rutschman said. “I kept looking in the dugout to see: ‘Is [Hyde] coming out? Is he coming out? It’s definitely cool to get that final out, to get that complete game.”

Notes:  Trey Mancini was hitless in three at-bats. He’s 1-for-16 against the Orioles since he was traded to Houston. … Rutschman committed the first passed ball of his career, allowing Alvarez to advance to second in the fourth inning. … Mike Baumann (1-3, 4.29) and Framber Valdez (16-5, 2.57) are the scheduled pitchers on Saturday night.  … Shortstop Jordan Westburg had three hits and centerfielder Colton Cowser hit his fourth home run as Triple-A Norfolk beat Durham, 6-3. Chris Vallimont (6-6) allowed three runs on five hits in 5 2/3 innings. Nick Vespi, who hasn’t allowed an earned run for the Tides, picked up his eighth save.