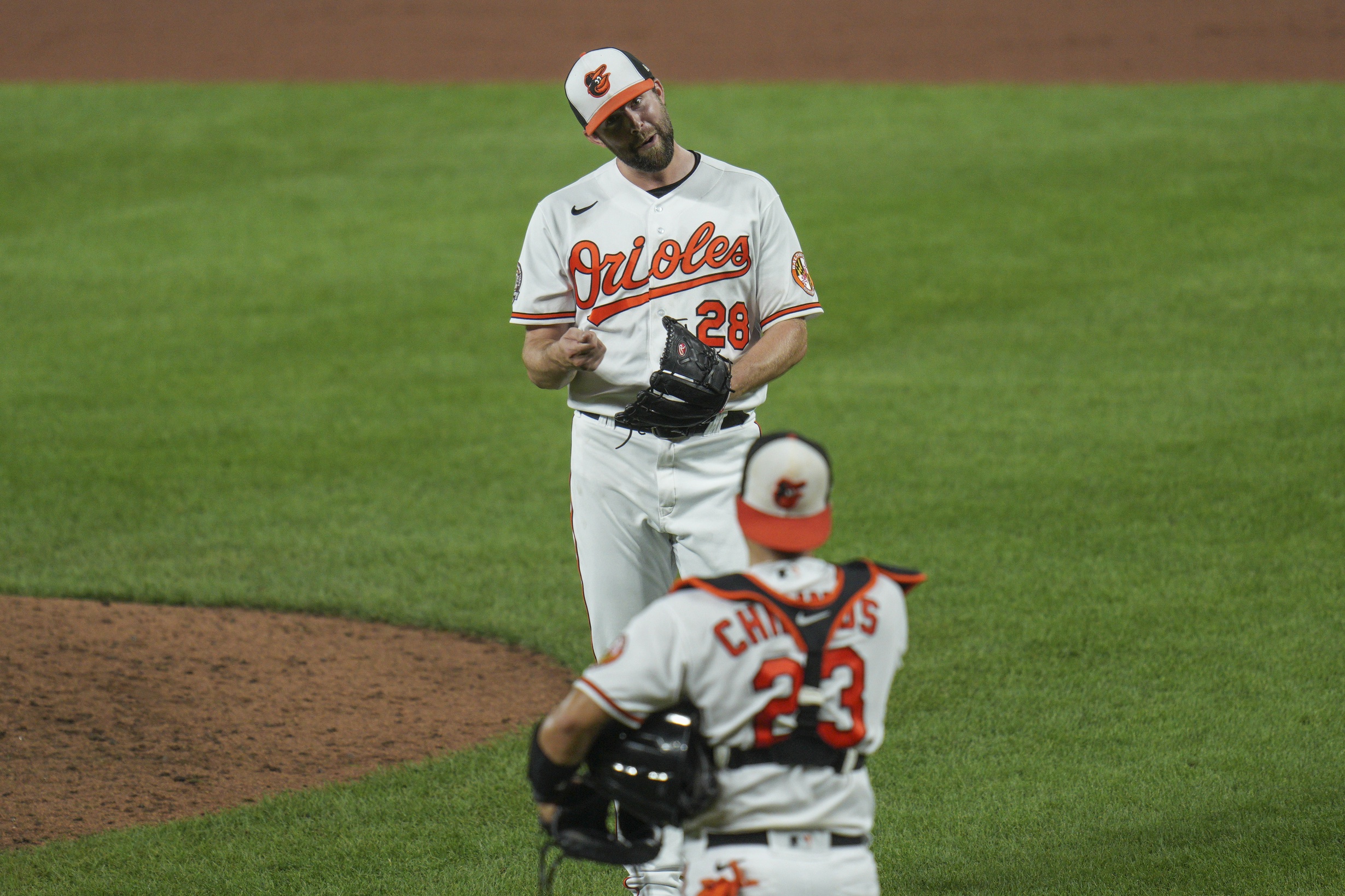 BALTIMORE—After losing two straight home games to the Detroit Tigers and five in a row this season, the Orioles got a commanding performance from veteran starter Jordan Lyles, who allowed just three hits in an 8-1 complete-game win before an announced crowd of 9,314 at Camden Yards on Wednesday night.

The kids were all right, too, on a night when Kyle Stowers and his rookie teammates pumped life into a stagnant offense.

The 31-year-old Lyles threw just his second complete game, his first since a four-hit shutout on September 30th, 2012 when he was pitching for Colorado. It was the Orioles’ first complete game at home since Dylan Bundy threw a one-hitter on August 30th, 2017.

Lyles struck out four and didn’t walk a batter, throwing 94 pitches, 72 of which were strikes. He didn’t allow the leadoff hitter to reach in any inning. The only other complete game in manager Brandon Hyde’s four seasons was John Means’ no-hitter on May 5th, 2021 at Seattle.

“I was efficient early and I was able to get into the game,” Lyles said.  “I looked up and I had 50 pitches at around five innings and kind of clicked, and it was go-time from there.”

Lyles (11-11) allowed a first-inning single to Kerry Carpenter, a second-inning single by Harold Castro, then retired 14 straight before Carpenter homered with one out in the seventh.

“It was fun tonight working with [catcher Robinson Chirinos],” Lyles said, “but we’ve got  to win … I’m very proud of that. Getting another off day to the bullpen. That’s always helpful for this long stretch at the end of the year. A lot of meaningful games to go.”

Lyles retired his final eight batters and was helped by outstanding defense in the ninth.

“Everything was working for him,” Chirinos said. “He was hitting his spots. His stuff was nasty today. That was the best I’ve seen this year. You pick a guy in the whole rotation to throw a complete game and Jordan is the guy who’s been throwing a lot of innings the whole year. He was getting ahead of everybody, and that was the key to throwing a complete game.”

In the ninth, Stowers made a sliding catch in foul territory on a liner by Akil Baddoo for the first out. First baseman Ryan Mountcastle snared a smash by Riley Greene and tossed it to Lyles for the second out, and Stowers ran down a fly ball by Willi Castro for the third out.

“Jordan came out and set the tone on the mound,” Hyde said.

Hyde was impressed that Lyles, who couldn’t pitch in the September 5th doubleheader against Toronto because of illness and allowed eight runs on seven hits in a 17-4 loss to Boston five days later, was able to rebound. On September 16th, Lyles allowed four runs on five hits in five innings at Toronto.

“He was going through a little rough patch, too,” Hyde said. “To be able to come back and give us a start we really needed. Obviously, we’ve been scuffling with the bats, haven’t played our best baseball in the last week to 10 days. For a veteran guy to go nine innings and put the team on his back, give the bullpen a break, especially in the stretch that we’re in … that was huge for us.”

With 14 games remaining, the Orioles are 4  games out in the wild-card race.

Stowers and fellow rookies Adley Rutschman, Gunnar Henderson and Terrin Vavra led the Orioles’ offense. Stowers drove in three runs on a home run and a single. Rutschman drove in two, Henderson drove in one and had two hits, and Vavra had a hit and walked twice.

The Orioles scored three runs in the third. Ramón Urías led off with a walk against Detroit starter Matt Manning (2-3). With one out, Cedric Mullins singled, and Rutschman bounced to Harold Castro at second, who booted it, allowing Urías to scored.

Mullins scored on an RBI single by Henderson, and Mountcastle brought home Rutschman on a deep sacrifice fly to left.

Stowers’ two-run home run to left-center, which was caught in the bullpen by Oriole closer Félix Bautista, gave the Orioles a 5-0 lead in the sixth. It was his second home run.

“After watching all the balls that [Mountcastle] has hit the last few weeks that haven’t gone out, you can’t trust anything, I guess,” Stowers said. “I was just worried he was going to catch it.”

Stowers, Chirinos and Rutschman added RBI singles in the eighth for an 8-1 lead.

“It feels really good to help the team win,” Stowers said. “Glad to be able to plug in and help the team where I can in whatever role skip has for me, I’ll be ready to go and do it to the best of my ability.”

After Lyles retired Detroit in the eighth, Hyde never considered going to the bullpen.

“I had a pretty good idea of what he wanted to do,” Hyde said. “And I wanted him to go out there.”

Notes: The Orioles were 5-for-10 with runners in scoring position. … The time of the game was 2 hours, 27 minutes, shortest of the season. … Jorge Mateo stole his 31st base in the eighth, tying him with Mullins and two others for the American League lead. … The Orioles will play Houston in a four-game series. Kyle Bradish (3-7, 5.05) will face Justin Verlander (17-3, 1.78) on Thursday night. … Lyles threw the 30th complete game in the major leagues this season.

Minor league update: High-A Aberdeen lost to Bowling Green, 4-0, in the third and deciding game of the South Atlantic League championship. The IronBirds, who lost the first game at Bowling Green on Sunday and won on Tuesday at Ripken Stadium, were held to four hits.

Second baseman Connor Norby had three more hits and three RBIs in his second game for the Tides. He hit his second home run.