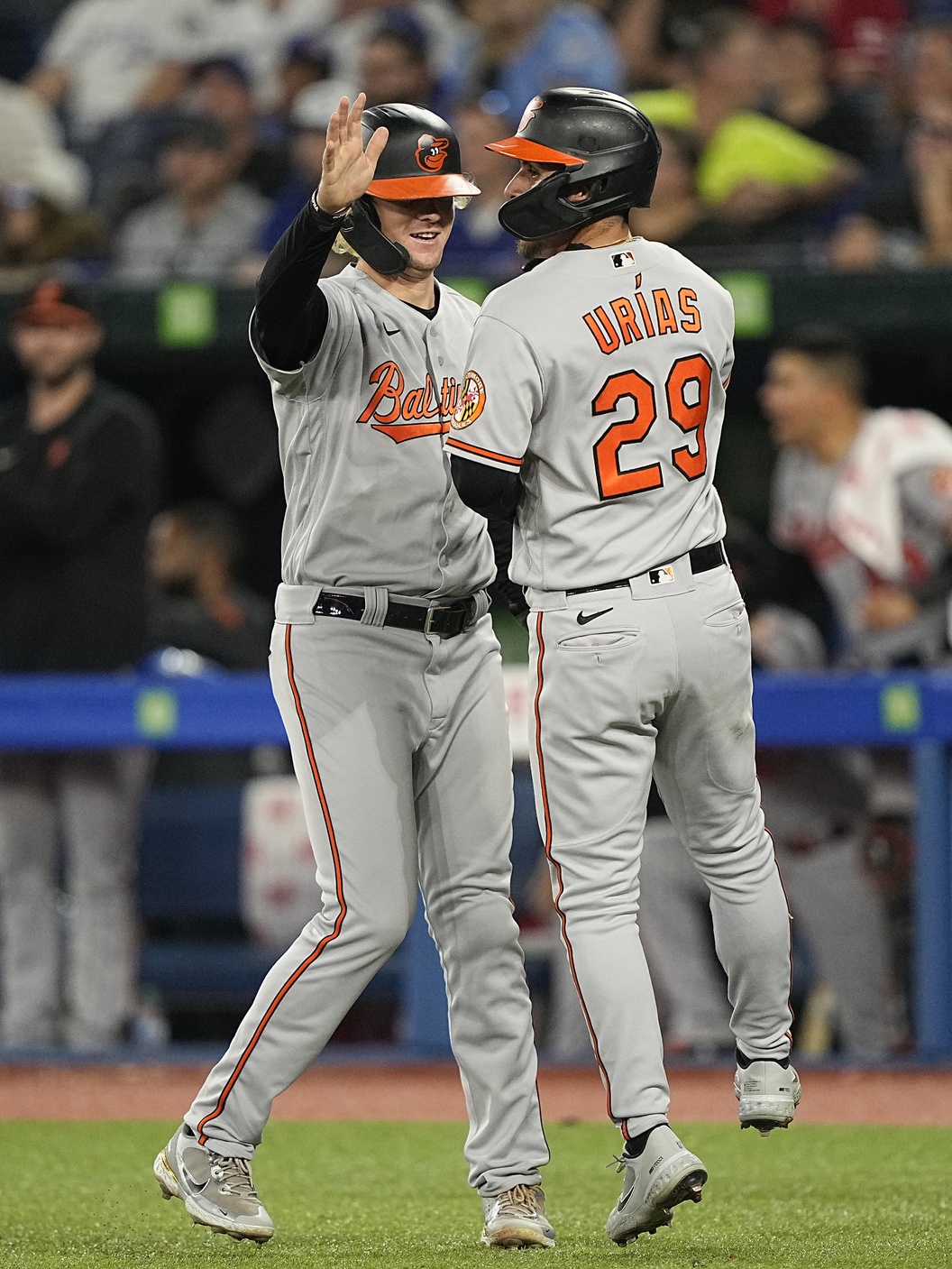 After losing the first two games of a three-game series with the Toronto Blue Jays, the Orioles trailed by a run heading into the ninth inning. A three-run ninth kept the Orioles slim playoff chances alive, and they escaped the Rogers Centre with a 5-4 win over Toronto on Sunday.

Trailing by 3-2, pinch-hitters Kyle Stowers and Ramón Urías began the ninth against Toronto closer Jordan Romano (5-4) with base hits to the opposite field. Cedric Mullins walked to load the bases.

Adley Rutschman singled through a hole on the left side, taking advantage of the Blue Jays’ shift, to score Stowers and Urías.

After Gunnar Henderson was walked intentionally, Jesús Aguilar singled to right — the fourth hit of the inning and the fourth to the opposite field–  to score Mullins and give the Orioles a 5-3 lead. Henderson was thrown out at third on the play for the final out.

“I hope they’re taking notice,” manager Brandon Hyde said to reporters in Toronto. “If you look at the [at-bats] in that inning, Stowers the other way, Urías the other way, Aggie with a line drive RBI single the other way in scoring position, that’s how you drive in runs.”

He then remembered that Rutschman’s hit, which put the Orioles in front, was also to the opposite field.

Aguilar, starting at first base because Ryan Mountcastle was out because of a bruised left elbow after he was hit by a pitch on Saturday, homered in the eighth inning, his first since joining the Orioles on September 1st. That cut Toronto’s lead to 3-2 and set up the dramatic ninth-inning comeback.

Closer Félix Bautista earned his 14th save, but it wasn’t easy. After getting the first two outs, Bautista walked Cavan Biggio after getting ahead 0-and-2. George Springer followed with a long drive to center that went off the top of the wall to score Biggio and make it a one-run game.

With Vladimir Guerrero Jr., who homered in the seventh inning, coming up, Hyde walked to the mound for a conference. Bautista walked Guerrero on a 3-2 pitch and then got Bo Bichette to ground to Urías at third for the final out.

“They’re phenomenal hitters, and they just have a phenomenal team,” Rutschman said on the broadcast. “We’re trying to game plan the best we can to work through the situation and get the win.

“We’ve got a bunch of guys who never give up. We continue to cheer each other on and support each other. We never get down, and I think that’s a big character trait that a lot of the guys on the team have. It’s just fun to be a part of.”

The Orioles (76-69) are 4 games behind Seattle for the third and final American League wild-card spot. Toronto (83-64) leads the Orioles by six games.

The Orioles and Blue Jays are 8-8 in the season series and conclude the season with three games at Camden Yards October 3rd-5th.

“One of the better wins of the year,” Hyde said. “Especially after the last couple of days that were so disappointing.”

The Orioles turned their first triple play since August 3rd, 2017. In the bottom of the third, with the Blue Jays having already scored on an RBI single by Bichette and Guerrero on second, shortstop Jorge Mateo caught a line drive by Matt Chapman. He flipped to second baseman Terrin Vavra to nab Guerrero before he could get back to base, and Vavra’s throw to Aguilar was in time to get Bichette before he could get back to first.

The Orioles tied the game at 1 in the top of he fourth on a single by Vavra and an RBI double by Mateo.

Oriole starter Dean Kremer allowed two runs on four hits in 5 2/3 innings but walked five while striking out four. He battled and appreciated the triple play.

“Huge, no outs to three outs. Now I’m out of an inning after giving up a run,” Kremer said. “It turned my day into six innings instead of potentially being three innings.”

Danny Jansen hit his 13th home run in the fourth, and Guerrero’s 29th home run, against Dillon Tate, put the Orioles behind, 3-1, in the seventh.

Joey Krehbiel (5-4) pitched a perfect eighth, and Hyde said it was the best he had thrown in some time.

The Orioles have 17 games left and return home for three games with the Detroit Tigers, beginning Monday night.

“Every game is big, especially against those guys,” Aguilar said of the Blue Jays. “We’re pushing in the race to try to make it. I think we’ve got a chance. We’re facing really good teams, but we have the tools to make it.”

The IronBirds play Bowling Green on Tuesday at Aberdeen in Game 2 and, if necessary, Game 3 on Wednesday.

With Erie’s 3-1 loss to Richmond, Double-A Bowie can qualify for the Eastern League playoffs with a win at Akron on Sunday night.