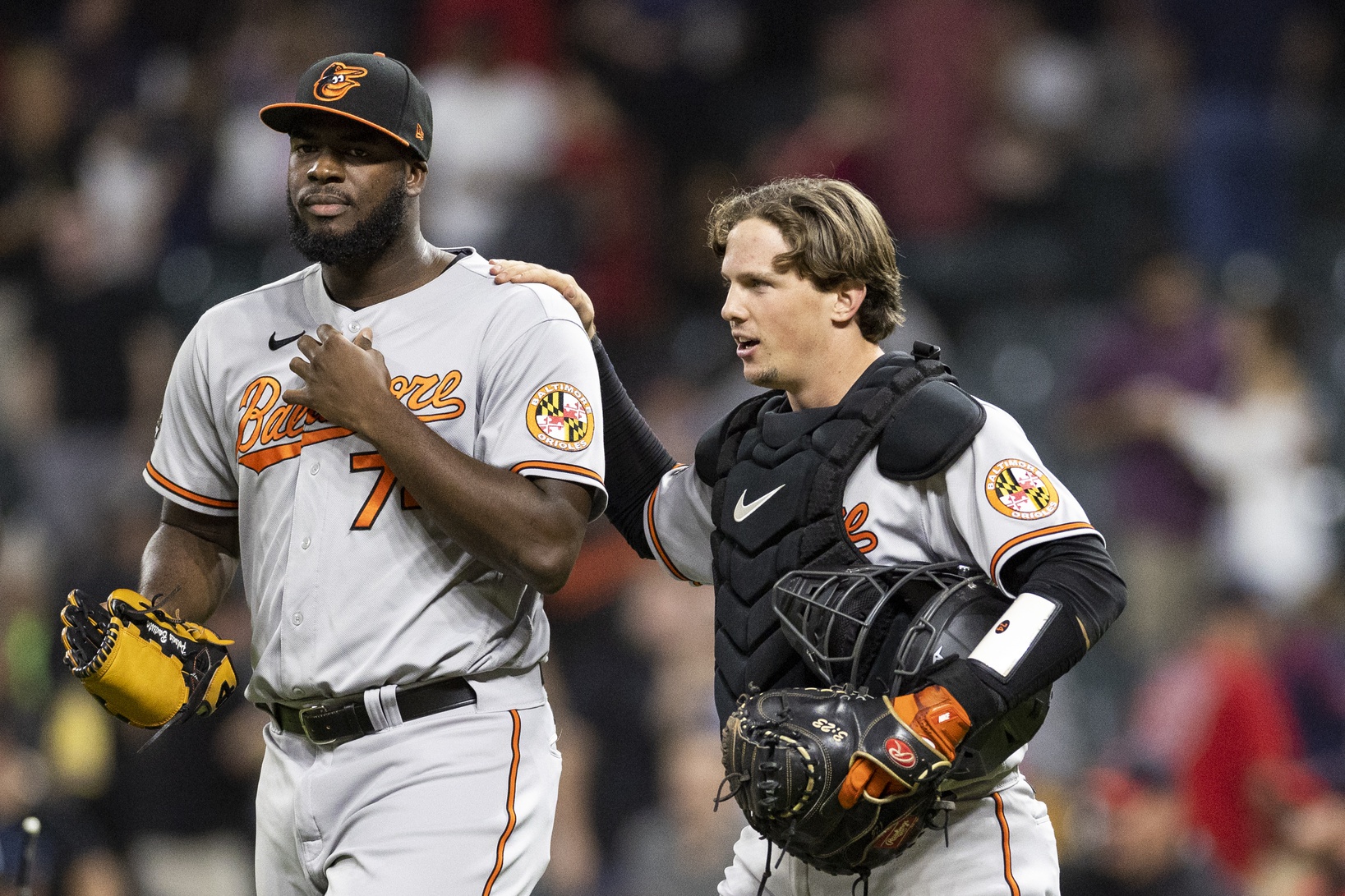 It’s time for the second part of our monthly mailbag. We received many thoughtful and interesting questions, which may be edited for length, clarity and grammar.

Question: Who are players on the 2022 roster who may not be back in 2023? From: PJ Steelman via Facebook

Answer: PJ, there are some free agents on the team — catcher Robinson Chirinos, second baseman Rougned Odor and first baseman/designated hitter Jesús Aguilar — who I doubt will return.

I think it’s highly questionable whether the Orioles will pick up starting pitcher Jordan Lyles’ $11 million option for next year, and that would make him a free agent.

Question: I haven’t heard anything about Heston Kjerstad for quite some time, despite updates on many other Orioles minor leaguers. Any word on what’s happening with him? From: Lee Kennedy via email

Answer: Lee, as I wrote on Friday, Kjerstad will be heading to the Arizona Fall League next month. Kjerstad had a great start at Delmarva, hitting .463 in 27 games, but hasn’t hit as well at Aberdeen. Kjerstad finished the regular season with a .233 average but hit .310 in September.

Colton Cowser and Gunnar Henderson didn’t hit terribly well at Aberdeen and did much better at Bowie, and the Orioles are hoping that’s the case with Kjerstad.

Question: Has Ryan Mountcastle discussed why or how his hitting has been better in September? From: Ed Cunneo via email

Answer: Ed wrote this before Mountcastle suffered a bruised left elbow after getting hit by a pitch in Saturday’s 6-3 loss to Toronto.

He’s walking a bit more and striking out less, and seems to be going to the opposite field more.

Question: What are dream offseason acquisitions versus realistic ones? From: Tony Sax via email

Answer: Tony, I think that signing Carlos Correa or Jacob deGrom, if they opt out of their contracts, to long-term deals are dream acquisitions. I also wouldn’t expect the Orioles to be a destination for either Clayton Kershaw or Justin Verlander, though that might be interesting.

More realistic ones are signing starters such as the Mets’ Chris Bassitt and Taijuan Walker, Boston’s Nate Eovaldi and Michael Wacha.

Question: Could you provide an update on the Orioles’ minor league teams and their chances of making the postseason? From: Glenn Fuller via email

Answer: Aberdeen, which defeated Brooklyn 2-1 in the first round of the South Atlantic League playoffs, plays Bowling Green in the first game of a best-of-3 championship series on Sunday.

If Bowie beats out Erie, it will advance to the Eastern League playoffs. The regular season ends on Sunday.

Question: Any update on the stadium lease extension negotiations?  Should fans be concerned, especially in light of the pending Angelos family litigation?  I’m sure that there are some complicated issues to be negotiated, but this really seems to have dragged on far longer than necessary. From: Birdman via email

Question: What do you think about keeping Rougned Odor, not as a player but a coach? The guy clearly brings something solid to the clubhouse. From: Martin Bakner via email

Answer: Martin, I think that Odor, who’s only 28, would like to keep playing and will try to find a new team in the offseason.

It’s interesting you bring him up as a potential coach. His uncle, Rouglas Odor, is the manager of Double-A Akron in the Cleveland organization. I think managing or coaching may be in Rougned Odor’s future, but not right away.

Question: Baseballs are thrown out of the game when pitches hit the dirt. When a ball is hit and out is made (fly or groundout), does that ball stay in play? From: Lyle Diamond via email

Answer: There’s no rule on when a ball is taken out of play, but at the end of an inning the fielder who catches the third out, often throws it into the stands, Lyle.

Question: Catcher Adley Rutschman has been everything that he was advertised to be.  The only two weak spots I see is his hitting from the right side of the plate and throwing out attempted base-stealers.  The hitting issue may improve in time, but I’m concerned about his throwing.  Many of his throws to second base bounce before arriving. I’m wondering if the shoulder injury he had in spring training is still bothering him.  What’s you take? From: Warren Brock via email

Answer: Warren, I’ve heard talk about the triceps injury having lingering effects, and he’s thrown out about a quarter of baserunners trying to steal on him. My guess is that with a winter to rest and strengthen the triceps, you’ll see his throws improve next year and his caught-stealing percentage rise.

Question: Will Mike Elias try to get Adley signed to a long-term deal? From: Rich Lehmann via email

Answer: Rich, yours is a popular question. The Orioles have never signed a player with so little experience to a long-term contract, and I’ll guess they’ll wait, though we’ve seen Seattle sign Julio Rodriguez and Atlanta sign Michael Harris to long-term deals.

Question: My biggest pet peeve in baseball is watching hitters consistently try to pull outside pitches, which almost always results in a weak ground ball.  Why do hitters continue to do this and not try go with the pitch?  I feel it really hampers our offense. From: Ed Heiger via email

Answer: Like you, Ed, I’m old school on going with the pitch and hitting the other way. I’ll be interested to see if the shift rules encourage more of this traditional style of baseball.

Question: I’ve seen a lot of O’s fans saying the team should target Giants pitcher Carlos Ródon in the offseason. What about him specifically would make him play well here with the O’s? From: Milo Copeland via email

Answer: Milo, as of Saturday night, Rodon was 13-8 with a 2.84 ERA and leading the major leagues with 220 strikeouts with San Francisco. He has struck out about 4 ½ times the number of batters as he’s walked and allowed just 11 home runs in 167 2/3 innings.

Ródon had excellent stats with the Chicago White Sox last year, too.

He can opt out of the second year of his contract with the Giants. If he does, he’ll be a highly coveted pitcher.

The Orioles should certainly consider him, but I’d guess he could be the most highly sought-after pitcher on the market.

Question: Last week the Orioles pitched Ryan McKenna, a position player in relief.  Why, when there were several relief pitchers still available? From: Hottens919 via email.

I’m not a fan of position players pitching, but I don’t think Hyde had much choice in that 17-4 debacle.

Question: Which Oriole has surprised you the most this season? Mine would be Cionel Pérez. He’s been a revelation and maybe their most consistent reliever. What do you think are the odds that the Orioles sign catcher Robinson Chirinos for next season? We’re big Chirinos fans in our household and would love to see him come back for at least one more season. From: Jeremy Carles via email

Answer:  I would say that closer Félix Bautista surprised me the most, though Pérez is a good choice. I didn’t think that Bautista would make the team out of spring training and thought there was a good possibility he wouldn’t survive the cut from 28 to 26. He’s made himself indispensable.

I think the Orioles will try to get a younger, experienced backup catcher in 2023.  Chirinos is 38, and I think they’d like someone younger, though he’s done a solid job defensively.

Question: This season has been a pleasant surprise and much improvement has occurred. But the hitting has been inconsistent and disappointing.

With so many young players on the roster ,why would the Orioles hire two hitting coaches with no major league experience? From what I can tell not much of a track record, either. What am I missing here? From: Famer24 via e-mail

Answer: Thomas, the Orioles and many other teams have recently hired hitting and pitching coaches without major league experience. It seems to be a trend around major league baseball. They want younger coaches who are comfortable with technology.

I was surprised that the Orioles hired both Ryan Fuller and Matt Borgschulte as co-hitting coaches, but both are hard working and seem to have a good relationship with the players.

It’s hard for me to evaluate hitting coaches, except the way you do. If a team is hitting, then they’re doing a good job, and if they’re not hitting, you question them.

I don’t know whether both will be back next season, but Fuller has worked with many of the young players in the minors, and they seem comfortable with him.