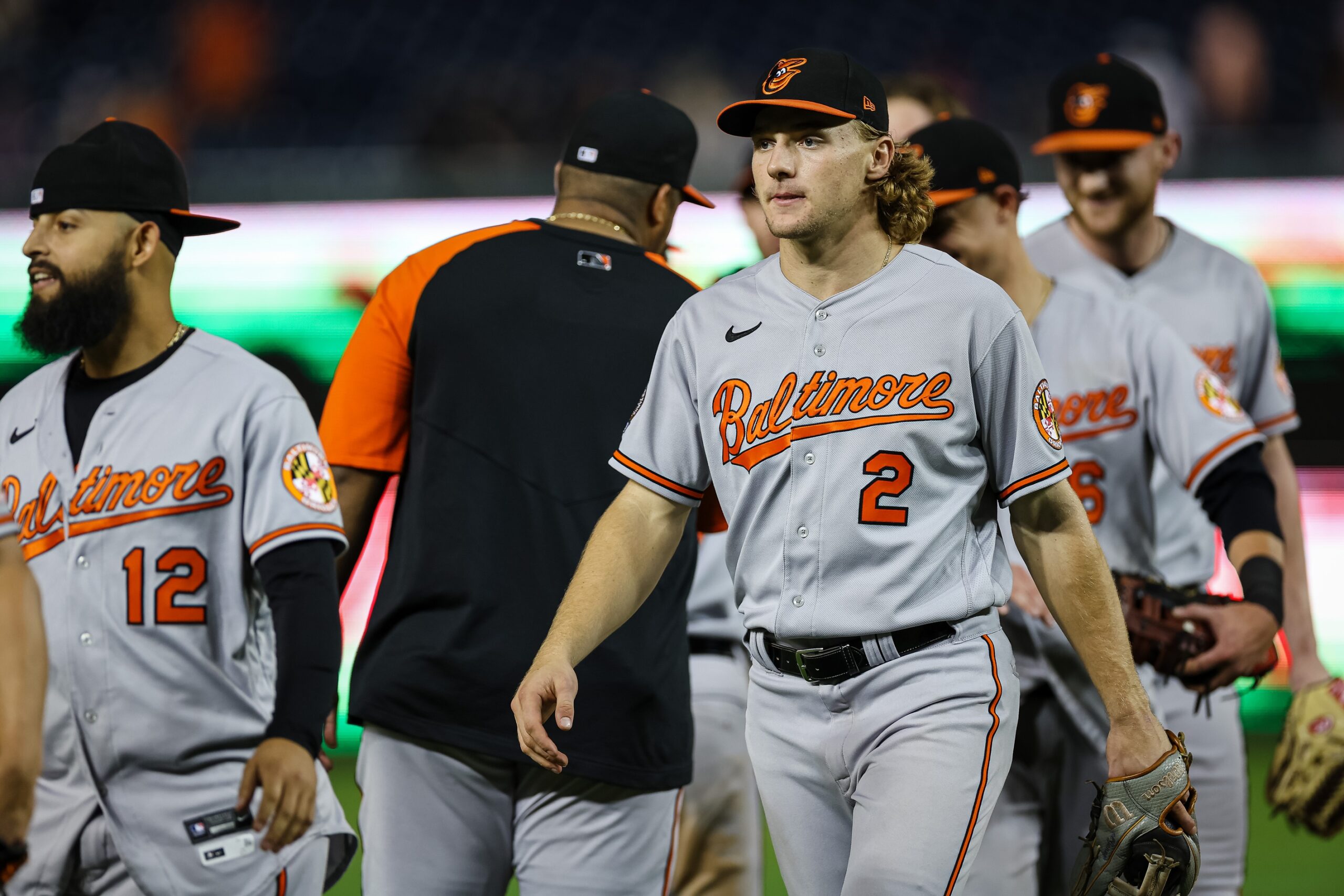 It’s time for part one of our monthly mailbag. We’ve received lots of interesting and thoughtful questions, which may be edited for clarity, length and grammar. The second part of the mailbag will be featured on Sunday morning.

Question: Assume the Orioles sign a top of the rotation starter. As of now, who are the other four in the rotation for 2023? From: @sboothe757

Answer: I think the Orioles will need far more than five starters next season because two of my choices, DL Hall and Grayson Rodriguez are likely to be subject to innings limitations. Kyle Bradish, Dean Kremer and Tyler Wells are also likely to start many games.

As for John Means, I don’t know when he’ll be back from Tommy John surgery, but he’ll certainly be in the rotation when he does.

Austin Voth, Bruce Zimmermann and rookie Drew Rom could be in the mix, too.

Question: Now that the shift will be outlawed for 2023, when can a fielder move? Is it when the ball leaves the pitcher’s hand, when it crosses the plate or when the batter swings? From: Barry Culman via email

Answer: Barry, the fielders must be in position when the pitcher toes the rubber and remain there until the ball is released from the pitcher’s hand.

Westburg is an outstanding prospect, but he plays second base, third base and shortstop. He’s never played first base in the minor leagues.

Without Aguilar, the Orioles have no experienced first baseman other than Mountcastle.

Gunnar Henderson and Adley Rutschman have played some first base in the minor leagues, and could play first in an emergency. Anthony Santander and Terrin Vavra have taken ground balls at first  but haven’t played there in a game.

Getting a suitable backup for Mountcastle is on the to-do list for the offseason.

Question: What can the Orioles do to improve? Can they add a quality starter? Do Mullins, Hays and Santander stay? Is Jorge Mateo a starting shortstop for a contender? Do they add bats to improve struggling offense? From: Mike Davis via email:

Answer: Mike, I think it’s possible that either Austin Hays, Cedric Mullins or Anthony Santander is part of a package to obtain a quality starter. Jorge Mateo is already the starting shortstop for a contender, and unless they start Jordan Westburg at short to begin next season, I would think he’d be back, though the Orioles have several interesting infield prospects.

Some of the offensive improvement could come from full seasons from Gunnar Henderson and Adley Rutschman. With the experience they’ve gained in 2022, they should be better in 2023. The same is true of Kyle Stowers.

I also think it’s possible the Orioles look to sign another big bat in free agency.

Question: Why isn’t Kyle Stowers playing more? He has more potential than any outfielder on the roster, just look at what he did in the minors yet he’s barely playing and several guys who won’t be here next year are. From: @MojoTilly

Answer: Mike, I’m a little surprised that Stowers hasn’t gotten more playing time, but as I just suggested in the answer to the previous question, I think it’s possible that there will be an outfield opening next season and Stowers gets more of a chance to play.

Question: Any thoughts on the lack of offense during day games this season? From: Brian Sturm via Facebook

Answer: Brian, your question has been raised by many readers lately. Overall this year, the Orioles are 53-37 in night games and 22-30 in day games.

I don’t think there’s any simple theory especially because as the Orioles have played better ball since the beginning of July, their record in day games has plunged.

Of their remaining 20 games, there are seven day games, and if they want to make the postseason, they’ll have to start winning some afternoon games, particularly the two this weekend at Toronto.

Question: How come the Orioles have not called Matt Harvey up especially for the doubleheader against Toronto?  I know he hasn’t pitched consistently well, but I still think he was the better choice. From: Robert Ritter via email

Answer: Robert, Matt Harvey hasn’t pitched since September 2nd, and is on the 7-day injured list. I don’t expect him to pitch for the Orioles this season, and with just over a week left in Norfolk’s season, I think it’s unlikely he’ll pitch for them, too.

If they had called Harvey up as the 29th man for the doubleheader, they would have had to add him to the 40-man roster, taking the place of another player, and if they sent him back to Norfolk after the game, he would have had to put on waivers because he’s out of options.

Both Mike Baumann and Bruce Zimmermann were on the 40-man roster, making for easy recalls and options.

Answer: Neil, I think Brandon Hyde has done an excellent job this season, and I think he’ll be the manager of the Orioles for the foreseeable future.

He’s been through playoff runs when he was with the Chicago Cubs as a coach, and I think that experience has helped him. Managing a contender is easier than managing teams that lose over 100 games a season.

Question: What effect, if any, do you think the saga involving the Angelos family will have on Mike Elias’ flexibility in free agency (money-wise) this offseason? From: @MichaelFleetwood

Answer: Michael, I don’t think it will have any effect at all. It’s had no effect on how the team has played. Coincidentally, news of the lawsuit first broke on June 9th two games before they reached their low point of the season, 24-35, 11 games under .500.

Question: After decades in Maryland, I’ve moved to North Carolina and can’t see the games, but watch the highlights and listen on the streaming radio. Gunnar Henderson has played second, shortstop and  third base. Being able to see him on the field, which spot do you see him settling into? From: Rick Staley via email

Answer: Rick, I’ve seen each of Henderson’s first 14 games in the majors, but won’t be in Toronto this weekend, and I think he looks terrific, particularly at third base. Fourteen games isn’t much of a sample. He’s played six games at third base, three each at shortstop and second and two as designated hitter.

I’ll say that he’ll be the starting third baseman next season.

Question: From watching our Orioles we don’t seem to have many hitters that can hit .250 or better. Do we have any good hitters in our farm system that you see coming to the big leagues next year? Or do you think in the off season that we will try to get a couple if free agents or by trade. I’ve followed the Orioles for more than 60 years. From: Michael Marrier via email

Answer: Michael, I think it’s likely that the Orioles will add a hitter or two via trade or free agency. I think they have some more interesting offensive prospects, principally infielder Jordan Westburg, who’s hit well at Triple-A Norfolk. He could start 2023 with the Orioles.

Keep an eye on outfielder Colton Cowser, who’s moved up from High-A Aberdeen to Double-A Bowie and is now on Norfolk. Cowser was their top draft pick in 2021 and did particularly well with the Baysox. He’s struggled some at Triple-A and don’t expect him to start 2023 with the Orioles, but if he hits well at Triple-A, he should get a shot at the big leagues soon.

Question: Do you think it’s more likely the Orioles could pass Tampa Bay or Toronto and make it into the postseason? From: Seth Mendelsohn via email

Answer: Seth, the Orioles begin their three-game series with Toronto trailing the Rays by 4 ½ games and the Blue Jays by 5 games. Since they don’t have any games left with Tampa Bay and have six with Toronto, it would be harder to catch the Rays. Tampa Bay and Toronto have four more games to play next week.

The Orioles are leading Toronto 7-6 in the season series, and if they win at least three of the remaining six games with the Jays, they have the tiebreaker.

Tampa Bay beat the Orioles 10-9 this season, so if the Orioles and Rays end the season in a tie for the final playoff spot, Tampa Bay makes the playoffs and the Orioles don’t. Seattle also has the tiebreaker over the Orioles.