Henderson drives in 4, turns game around with run around the bases in Orioles' 6-2 win over Nationals - BaltimoreBaseball.com 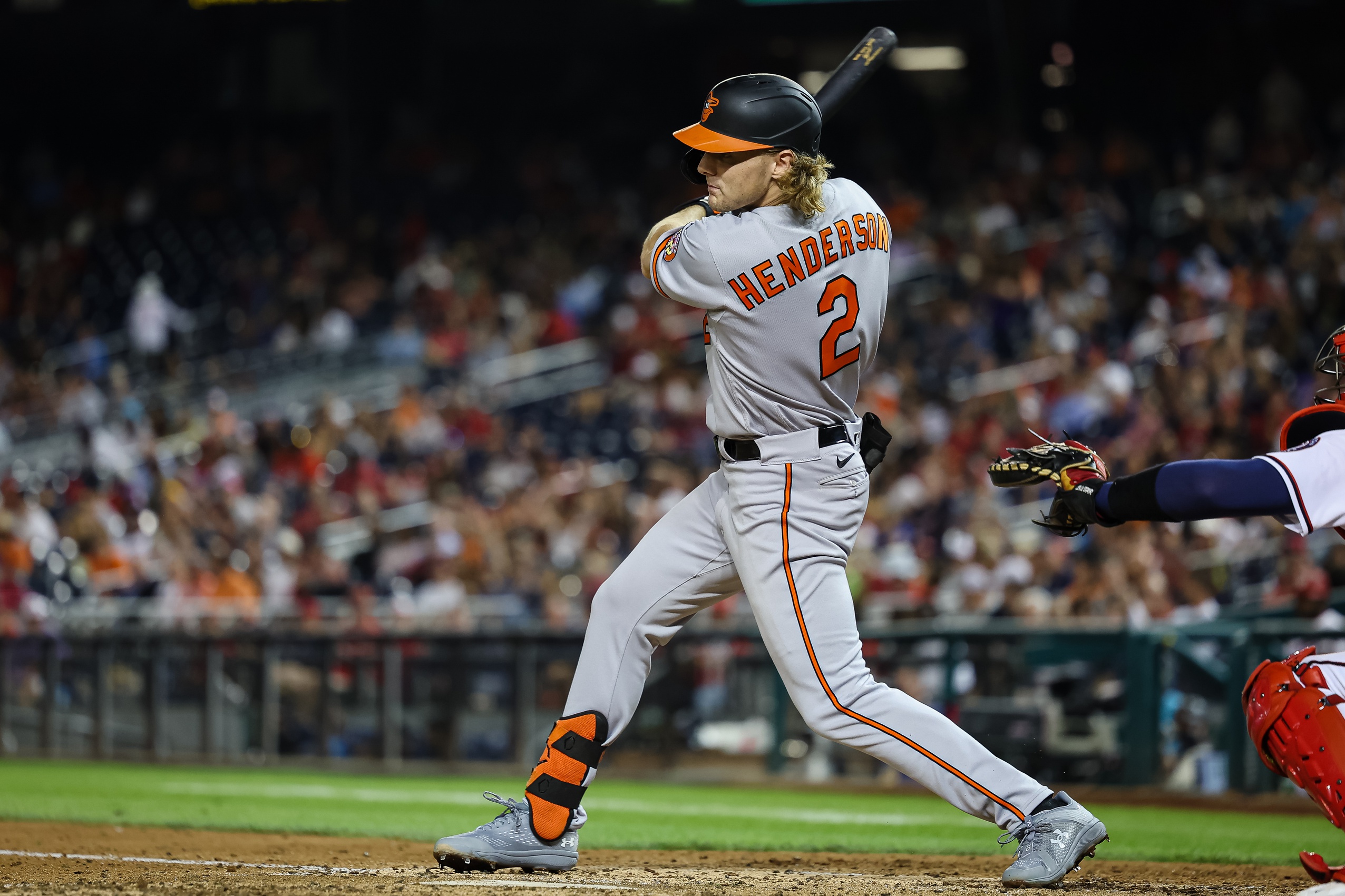 WASHINGTON—The Orioles had just a run and four hits in six innings and were facing a loss to the Washington Nationals. Suddenly, their offense came to life in the seventh inning, and they turned the game around.

Gunnar Henderson hit a two-run triple and scored on an error in a four-run seventh as the Orioles defeated the Nationals, 6-2, before an announced crowd of 32,497 at Nationals Park on Wednesday night.

Henderson had his first four-RBI game in the major leagues and is hitting .320 in his first 14 games. The Orioles went on a four-game winning streak when Henderson made his debut, then lost six of eight before sweeping the two games against Washington. A big three-game series in Toronto starts Friday.

“We were playing a little tense,” Henderson said. “We were able to play loose. You saw the energy in the dugout. It was really loose. We turned it around and we’re looking forward to this [next] series.”

Manager Brandon Hyde has been impressed by Henderson.

“You expect young players to go through their struggles early, and he’s been swinging the bat really well,” Hyde said. “He runs well. He’s playing really good defense, and he’s taking great at-bats for us.” Hyde was thrilled that Henderson’s game-winning hit was down the left-field line.

“I thought there was a lot of game left, still,” said Hyde, whose Orioles loaded the bases with none out in the second and scored just one run.

“We had a bunch of left-handers on the bench, and utilized them there in that inning,” Hyde said.

Henderson hit a ball into the left-field corner, scoring Vavra and Mullins, and Henderson scored on a throwing error by leftfielder César Hernández and, suddenly, it was 4-2.

“I was looking and I saw him wind back to throw it, so I slowed up a little bit and I see [third base coach Tony Mansolino] waving his arms home, kind of caught me off guard, so that was pretty fun,” Henderson said.

The Orioles had just four hits before the sixth.

“We had some baserunners on and I was just trying to do the job,” Henderson said. “Luckily enough, was trying to do a little bit more, and get a few more runs in.”

One pitch after Henderson scored, Jorge Mateo hit a home run against Ryan Thompson (1-1), and the Orioles had a 5-2 lead.

Henderson added an RBI double in the eighth to score Mullins.

Austin Voth (5-2) pitched a scoreless sixth inning, which followed a perfect fifth by DL Hall, who relieved starter Tyler Wells. Cionel Pérez, Jake Reed and Bryan Baker shut down the Nationals the rest of the way.

The Orioles begin a three-game series in Toronto on Friday night, trailing Tampa Bay by four games for the third wild-card spot. They’ve lost the season series against Tampa Bay and Seattle, which would be the tiebreaker if they were to finish with the same record. They lead the season series against the Blue Jays (7-6), whom they trail by 5 1/2 games and play again in the final three games.

“Last week was disappointing,” said Hyde, whose Orioles lost three of four to Toronto and two of three to Boston. “We played really well these last two games, so happy to leave here and go to Toronto.”

Anthony Santander, Ramón Urías and Aguilar started the second with singles against Washington starter Patrick Corbin. McKenna grounded back to Corbin, who threw home for a force on Santander at the plate. Henderson hit a grounder to third that scored Urías.

In his second start after a stint on the injured list because of an oblique injury, Wells retired the first eight batters until Riley Adams hit his fourth home run. Luke Voit hit his 20th homer in the fourth to give the Nationals a 2-1 lead.

The home runs were the only hits Wells allowed in four innings.

“I would say I’m feeling pretty good right now,” Wells said. “It’s a start-by-start thing, day-by-day, making sure it continues to get better. I feel healthy right now. That’s all I can ask for.”

Corbin retired 12 in a row until Austin Hays led off the sixth with a double. He hit Ryan Mountcastle with a pitch but got out of the inning when Santander flied to center and Urías grounded back to the mound.

“Hopefully, we can carry the momentum from here,” Wells said. “We feel good. We’re sitting there picking each other up. The dugout’s been really loud, showing a lot of camaraderie and team support. I think that goes a long way. Hopefully, we can continue that in Toronto and carry out a series win there.”

Notes: After Thursday’s final offday of the season, the Orioles play three games in Toronto. Friday’s game will be streamed only on Apple TV+. Orioles broadcaster Melanie Newman, Chris Young and Russell Dorsey will call the action. The Orioles and Blue Jays haven’t announced their starting pitchers for the series.

Call for questions: I’ll be answering Orioles questions this week. Please email them to: [email protected]