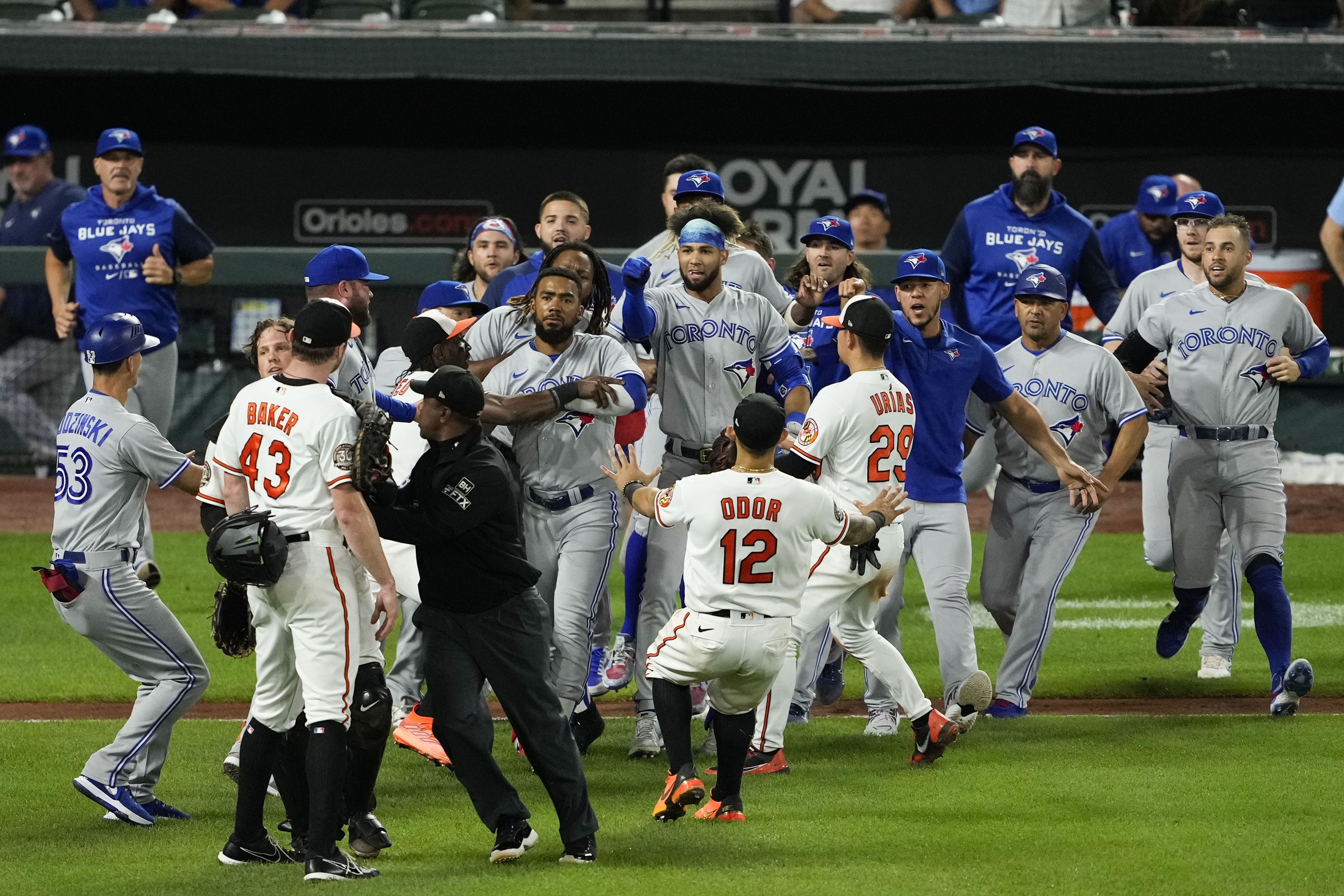 When starter Kyle Bradish gave up a walk and a hit to start the fourth inning, Hyde called for Dillon Tate, a reliever he usually uses later in games. Cionel Pérez was called on to pitch the fifth, Bryan Baker the seventh and closer Félix Bautista the eighth and ninth.

Hyde’s aggressive use of his bullpen worked out, and the Orioles defeated the Blue Jays, 9-6, in a tense and emotional game played before a spirited crowd of 8,411 at Camden Yards. It felt like a playoff game, and Hyde approached it that way.

“I thought we needed to win the game,” Hyde said when asked about bringing in Tate in the fourth. “I was doing anything I can to try to win the game.”

The Orioles (72-64) are 3 ½ games behind Toronto (75-60) and play them again on Wednesday night. After this series, the Orioles play in Toronto September 16th-18th, and the teams meet back at Camden Yards October 3rd-5th in the final three games of the regular season.

“It’s a big win just because of where we are in the standings and the team we’re playing,” Hyde said. “Real excited about how we came back tonight. We pieced it together bullpen-wise.”

The game featured two big offensive innings by the Orioles, the ejection of Toronto interim manager John Schneider and a benches-clearing skirmish.

The Blue Jays’ offense struck first. Matt Chapman hit a single to score Alejandro Kirk in the second, and Bo Bichette hit his fourth home run in two games, a two-run shot, his 22nd, against Bradish in the third to give Toronto a 3-0 lead.

In the bottom of the third, the Orioles answered. They sent 10 batters to the plate and scored five runs.

Rougned Odor was walked by Blue Jays starter Mitch White (1-6). Jorge Mateo walked, and Cedric Mullins was hit by a pitch to load the bases.

Adley Rutschman hit a double down the third base line to score Odor and Mateo. An infield out by Anthony Santander scored Mullins. Rutschman scored on a single by Ryan Mountcastle, and Gunnar Henderson singled to right to bring home Mountcastle and give the Orioles a 5-3 lead.

In the top of the fourth, Bradish walked Cavan Biggio, and he advanced to third on a single by Lourdes Gurriel. That’s when Hyde went into action. He called on Tate (4-3) to relieve Bradish, and he was splendid. Tate retired Whit Merrifield on a fly to right, struck out George Springer looking, and got Vladimir Guerrero Jr. to ground to third.

“I thought the game was in balance, and I was going to bring in a guy that can give us a ground-ball double play,” Hyde said. “One of our high-leverage guys against the top of their order, even though their order is pretty much high leverage … They’re so good. I went with Tate earlier than normal because I felt we needed to get out of that jam.”

“Every game is a must-win at this point,” Bradish said about the importance of Tuesday’s game. “It doesn’t matter who we’re playing.”

Tate hung a slider to Matt Chapman in the fifth, and he doubled to left to score Bichette, who had doubled to right. It reduced the Orioles’ lead to 5-4.

“I didn’t expect it at all,” Tate said of his early appearance. “All in all, it was a huge team win. We had to scrap, offense and defense. In all, the team did an excellent job today.”

Cionel Pérez relieved Tate and retired Cavan Biggio on a fly to left to end the fifth. He then pitched a scoreless sixth.

“It just felt like we had to use our relievers early in the game,” Rutschman said. “Guys had to grind it out a little bit more.”

Mateo tripled with two outs against Yusei Kikuchi in the sixth and scored on a single by Mullins against the left-hander to give the Orioles a 6-4 lead.

In the top of the seventh, Bryan Baker allowed singles to Bichette and Kirk to begin the inning. Teoscar Hernández hit into a double play and Bichette scored to make it 6-5.

After Baker struck out Chapman for the third out, he gestured to Toronto’s dugout, specifically to Hernández, and both benches and bullpens came onto the field. Guerrero and Hernández were held back by Mateo.

“I think Bake pitches with a lot of intensity,” Hyde said. “It was a big strikeout. Sometimes he lets it out.”

Order was quickly restored as Rutschman ushered Baker away from the skirmish.

“Just a disagreement,” Baker said. “Something that got taken too far and probably shouldn’t have come to that … went a little bit too far.

Baker said the Blue Jays, for whom he played in 2021, weren’t chirping at him from the dugout.

“I was part of that organization. I know some of those guys. I have no problems with them. I didn’t hear anything negative at all, just a personal problem that I probably should have handled a different way.”

Hernández said he thought Baker was angry “because Monday I hit a homer. Every time he pitches against us he just tries to make a show,” he said,

In the bottom of the seventh, Schneider was ejected by home plate umpire Jeff Nelson for arguing balls and strikes.

The Orioles added three runs in the bottom of the eighth on a bases-loaded walk by Santander and a two-run single by Mountcastle that initially appeared as though it had scored one when Rutschman was called out at the plate. Hyde appealed the call because he thought Kirk was blocking the plate at he awaited the throw. On review, Rutschman was called safe.

It was the second surprising safe call of the inning. Odor, who also played peacemaker in the seventh, got a hit to center with one out and appeared as if he would be thrown out at second when he tried to stretch it to a double. George Springer’s throw was in time but Odor slid around the tag of Bichette.

Bautista, who entered the game with a one-run lead in the top of the eighth and retired the Blue Jays in order, allowed a run in the ninth before notching his 12th save — and his first requiring six outs.

“They all feel intense right now, especially with a club like the Blue Jays that’s playing solid baseball,” Tate said. “It’s imperative that we’re able to handle business. It’s good that we were able to do that tonight.”

Minor league update: In his second rehab start, top pitching prospect Grayson Rodriduguez allowed a run on a hit in two innings in Double-A Bowie’s 7-3 loss to Richmond. Rodriguez, (0-1) who is recovering from a lat strain, threw 40 pitches, walking two and striking out four.

High-A Aberdeen’s game at Jersey Shore was rained out.