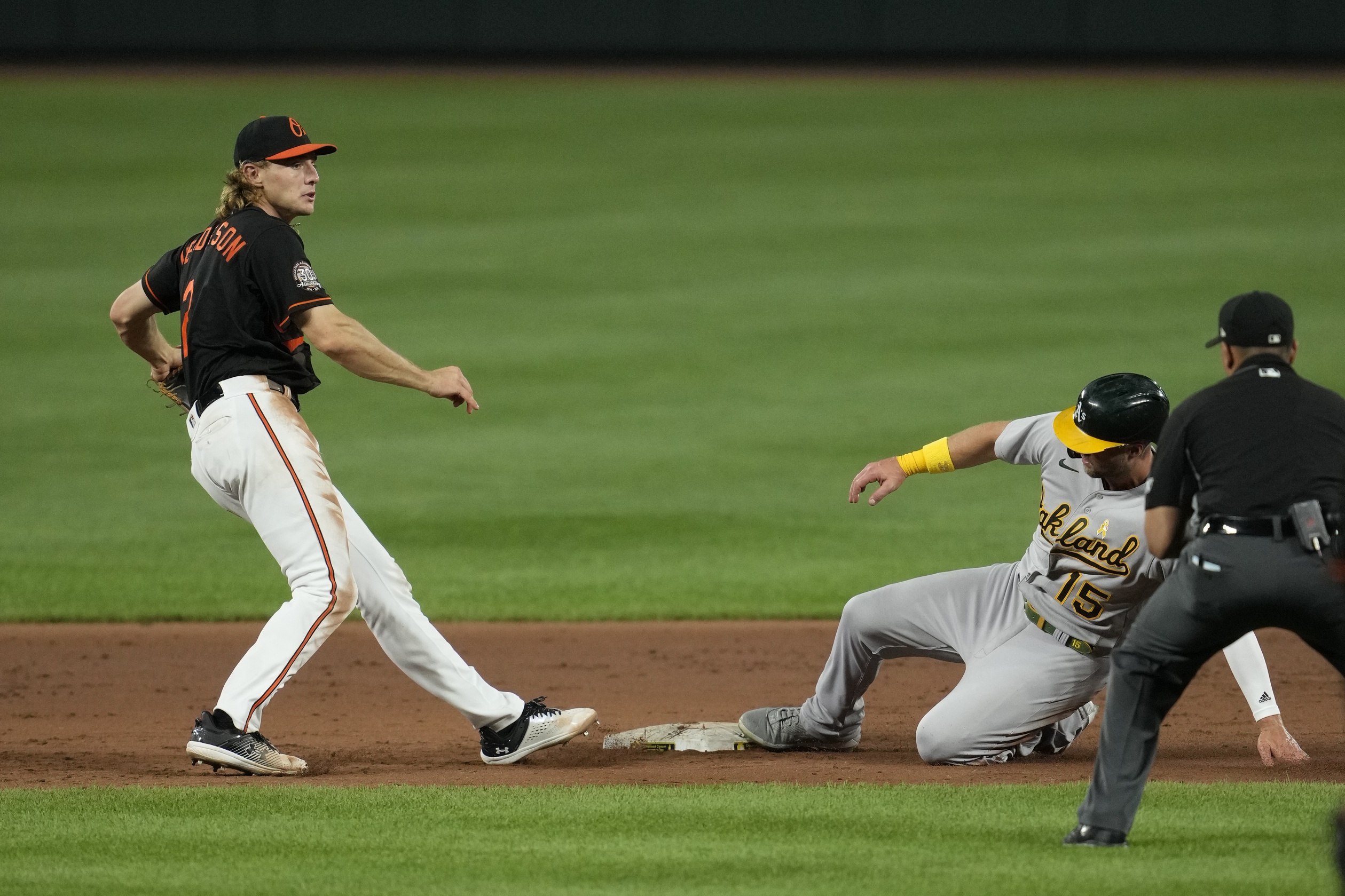 BALTIMORE—Manager Brandon Hyde decided that Cedric Mullins and Adley Rutschman needed a rest against Oakland left-handed starter JP Sears, and he didn’t start them in the opener of a three-game series against the Athletics on Friday night.

In the bottom of the eighth with the game tied, 2-2, Hyde used Mullins and Rutschman as pinch-hitters. Mullins was walked intentionally to load the bases with one out, and Rutschman showed the patience that has set him apart to force in the go-ahead run in a 5-2 win over the Athletics before an announced crowd of 13,558 at Camden Yards.

Seattle, Tampa Bay and Toronto all won to keep the Orioles 1 ½ games behind the Blue Jays for the third and final wild-card spot.

Asked about the decisions he made in the eighth, Orioles manager Brandon Hyde said: “We’re playing for our lives right now. We’re playing to try to catch people. We’re playing important games in September. That’s never happened since I’ve been here. That’s a lot of fun, to play the games that matter and not just play spoiler and play for yourself.”

Anthony Santander began the eighth by walking against Domingo Acevedo (3-3). Ryan Mountcastle bounced to second baseman Jonah Pride, who inexplicably looked to second for the forceout and then threw late to first, giving Mountcastle an infield single.

Both runners moved up on a perfect sacrifice bunt by Ramón Urías as Hyde was plotting what would happen next.

“I figured they were going to walk Cedric [to load the bases],” Hyde said. “There were a lot of things going on right there … They had to make a choice on Cedric. Rutschman had the biggest at-bat of the night, and he didn’t start the game. That was winning baseball.”

Rutschman worked the count to 3-and-2 before taking a low pitch to bring home Santander with the go-ahead run.

Jorge Mateo thought Acevedo might try to to get ahead in the count and singled on the first pitch through a drawn-in infield to score Mountcastle and Mullins for a 5-2 lead.

“We’re trying to take advantage of every pitch that we see out there,” Mateo said through a translator.

Gunnar Henderson, who became the first player in Orioles history to start his first three games at different positions, hit a leadoff double in the third and scored on a bloop double to left Robinson Chirinos. Mountcastle followed with a single to right against Sears to score Chirinos for a 2-0 lead.

Oriole pitchers, who have led the team’s surge, held opponents scoreless for 25 straight innings until the A’s scored in the fifth against starter Dean Kremer.

Vimael Machin led off with a single for Oakland (49-83). Dermis Garcia doubled to send Machin to third. With two outs, Kremer walked Cal Stevenson to load the bases. Tony Kemp hit a curve for a two-run single to tie the game, 2-2.

Kremer allowed two runs on five hits in six innings and thought he had his best stuff after another strong outing.

“It’s awesome. We’ve got a special group of guys here and things can take off at any moment,” Kremer said. “Especially late in games when the bullpen comes in and shuts it down and we’ve got to face the other bullpen. We’ve done a tremendous job putting up runs late.”

Grayson Rodriguez, who pitched for High-A Aberdeen on Thursday, will make his second rehab appearance early next week for the Baysox.

In his first rehab appearance, Tyler Wells allowed a run and a hit in 2 1/3 innings. He struck out three and walked none as High-A Aberdeen lost to Hickory, 9-2. Wells threw 31 pitches.

Catcher Silas Ardoin drove in all three runs for Single-A Delmarva in its 3-2 win over Fredericksburg.