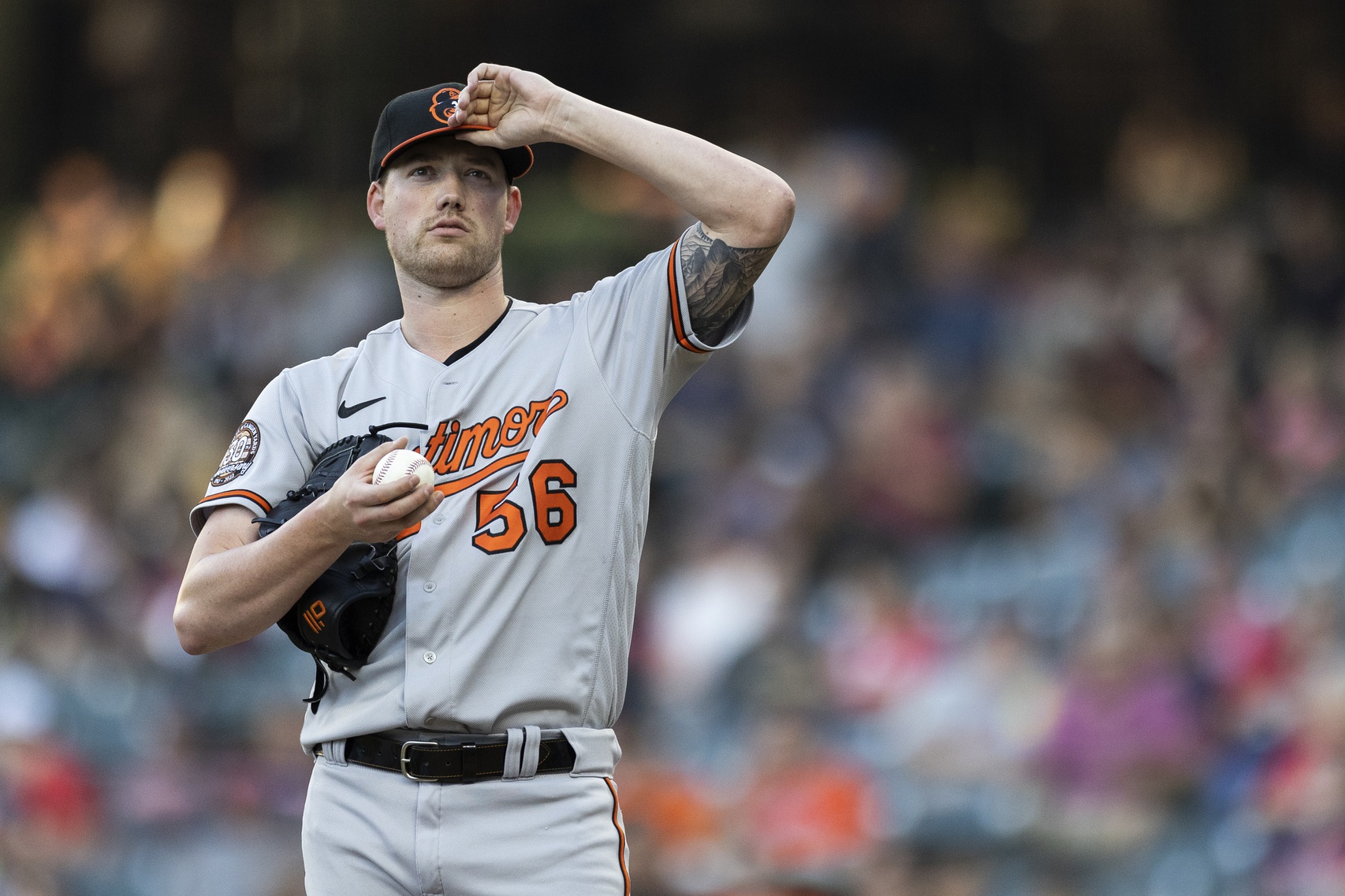 CLEVELAND—The Orioles completed a six-game road trip against American League division leaders Houston and Cleveland by taking two of three from both teams and shutting out the Guardians in consecutive games.

“We go 4-2 on a trip against Houston and Cleveland with the pitching staffs that they have and the playoff teams that they have, I’m really proud of these guys,” manager Brandon Hyde said.

Kyle Bradish followed his standout performance in Houston when he allowed two hits in eight innings by giving up just two hits again—this time in seven innings as the Orioles defeated the Guardians, 3-0, before an announced crowd of 11,927 at Progressive Field.

The win put the Orioles (69-61) within 1 ½ games of Toronto for the third and final wild-card position. The Orioles and Blue Jays play four games in Baltimore next week.

It was their 13th shutout of the season, equaling their 2014 total, the year they won the American League East.

“He’s just learning as he goes,” catcher Adley Rutschman said. “He’s continued to do the work at his end to get better and learn. You’re seeing the results right now. It’s just been fun to catch. He’s been on fire. It’s a tribute to his work ethic.”

Myles Straw and Steven Kwan walked with one out in the third, but neither runner reached third.

“It means all the work I’ve been putting in is paying off right now,” Bradish said.

“Without his best stuff, without his best command, you see a young pitcher really improving in the big leagues, just like Dean Kremer is,” Hyde said.

Cionel Pérez pitched a spotless eighth, striking out two, and Félix Bautista struck out two in a hitless ninth, earning his 11th save.

“I think it’s important to get these series wins,” Santander said through a translator. “Getting that series win against Houston was huge for us and gave us the confidence to come in here as well and fight really hard to get a win here.”

In his second major league game, Gunnar Henderson didn’t homer but did get a ninth-inning single and his first major league stolen base, with his helmet flying off again. He also made two excellent plays in his first game at shortstop.

“He got a hit tonight, with that home run last night that was really impressive,” Santander said. “He did a really good job playing shortstop with some incredible plays that he made out there. Just very impressive overall.”

In the fourth, Henderson fielded a grounder by Oscar Gonzalez, stepped on second to force Josh Naylor and threw to first to complete the double play.

In the sixth, he dove deep in the hole to catch a grounder Amed Rosario and fired to first for the out.

“It’s great. I’m fortunate to be able to watch him right now, to be able to do his thing, make his debut. You know the emotions that he’s going through. Just to see him handle it so well just with so much maturity and class speaks a lot to his character. Obviously, the talent is there. It’s more than there, so it’s just been to watch.”

Bieber (8-8) allowed three runs (solo homers) on six hits in seven innings, walking one and striking out 11 for Cleveland (68-61).

“I think our guys have a ton of confidence,” Hyde said. “That stretch we had where we won 10 in a row and started winning a lot of series just builds  confidence. We’ve beaten good teams. We’ve beaten some of the best teams in baseball in their parks. We’ve won a lot of series. I know the league has taken notice.”

Notes: Terrin Vavra started in left field and struck out three times. He was replaced by Ryan McKenna in the seventh. … In his first game with the Orioles, Jesús Aguilar was hitless in four at-bats, striking out three times. … Mullins’ first-pitch home run was the first Oriole home run on the game’s first pitch since Tim Beckham on August 14th, 2017 at Seattle. … The Orioles posted consecutive shutouts for the second time this season. They also did on June 22nd against Washington and June 23rd against the Chicago White Sox.

High-A Aberdeen defeated Hickory, 4-3. In his first rehab start since missing three months because of a lat strain, Grayson Rodriguez pitched 1 1/3 innings, allowing one hit, walking two and striking out one. He threw 31 pitches.