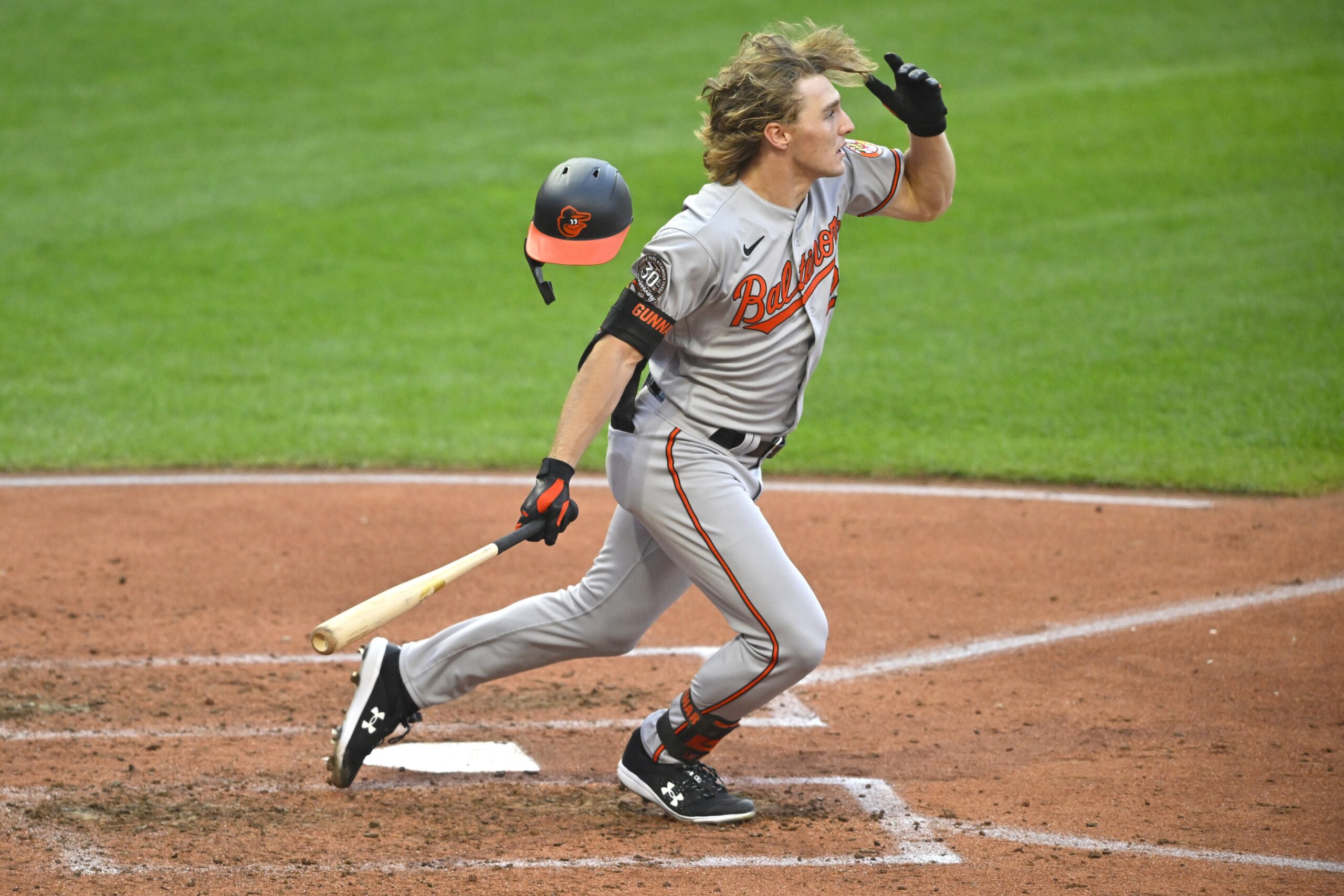 CLEVELAND—There was a lot to remember about Gunnar Henderson’s major league debut. His first major league hit, a fourth-inning home run, his helmet flying off, and a lack of nerves.

Henderson went 2-for-4, and flawlessly handled seven chances at third base, all on just 45 minutes sleep as the Orioles beat the Cleveland Guardians 4-0, before an announced crowd of 12,221 at Progressive Field on Wednesday night.

Henderson hit his first major league home run in his second at-bat in the fourth inning, a 429-foot shot, and he singled to right in the ninth inning. In his first at-bat, he flied to deep left field where Steven Kwan ran the ball down in foul territory, leaped and caught his drive before starting a rare 7-6-3 double play.

He was presented with the Orioles’ orange championship belt for the outstanding player of the game and Adley Rutschman, who was a minor league teammate and drafted ahead of Henderson in 2019, put the Orioles’ home run chain on him after his big hit.

“It was a pretty special feeling being able to do that for my first hit,” Henderson said. “Being able to see all the guys in front of the dugout was pretty awesome.”

Henderson could become known as much for his flying helmets and hair as his hard hits.

“Every time I swing it comes off,” he said. “We tried them on, and that was the closest one. I guess I’ve got too much hair going on.”

Manager Brandon Hyde chuckled as he was reminded of Henderson’s helmet flying off.

“I think we need to get him a chin strap or some Velcro or something,” Hyde quipped. “Two strikes, and that ball was hit. It was loud and it was a no-doubter off the bat. Our dugout exploded. I don’t think the helmet made it out of the batter’s box. Good for him.”

“It could have been that I got 45 minutes of sleep last night, but that probably didn’t help,” he said. “I didn’t really feel any nerves out there. I went out there and was myself and it was a pretty good day.”

When Henderson returned to the Orioles’ clubhouse, he was greeted by his teammates who ushered him into the showers for a celebration.

“Just dumped a bunch of stuff on me,” Henderson said. “We’ll leave it at that.”

He was asked to speak after receiving the belt, and it may have been the only time he came up empty in his debut.

“Thank you for letting me come out here and do this,” Henderson said. “Not very good at being on the spot with a speech.”

“We’ve got another month or so to watch him and see how talented he is,” Lyles said about Henderson.

It was his 12th quality start.

“I thought it went pretty well,” Lyles said. “I thought we were pretty efficient for the most part. Maybe an unnecessary walk or two in the middle of the game, but we got out of some jams.”

The Orioles (68-61) gained a game on Toronto, which lost to the Chicago Cubs, and trail the Blue Jays by two games for the third and final wild-card spot.

Ramón Urias drove in three runs with a bases-loaded walk in the third and a two-run home run, his 15th, in the eighth.

Henderson started a 5-4-3 double play in the bottom of the fourth and ended the inning by stepping on third to force Andrés Giménez on Luke Maile’s grounder to third.

“He did a nice job defensively,” Hyde said. “I’m sure it’s a sigh of relief for him. I’m sure he’s still got a ton of energy right now. I think I just heard the clubhouse erupt when he walked in. Everybody’s happy for him.”

The final scheduled home game is March 26th against the Phillies. The Orioles’ scheduled offday is March 15th. The Orioles open the season on March 30th at Boston.

The Orioles have not announced reporting dates.

Cade Povich (2-0) allowed a run on three hits in six innings, striking out six and walking one.

High-A Aberdeen had just one hit in the opener of its doubleheader. Hickory beat the IronBirds, 1-0. First baseman TT Bowens had the only hit.