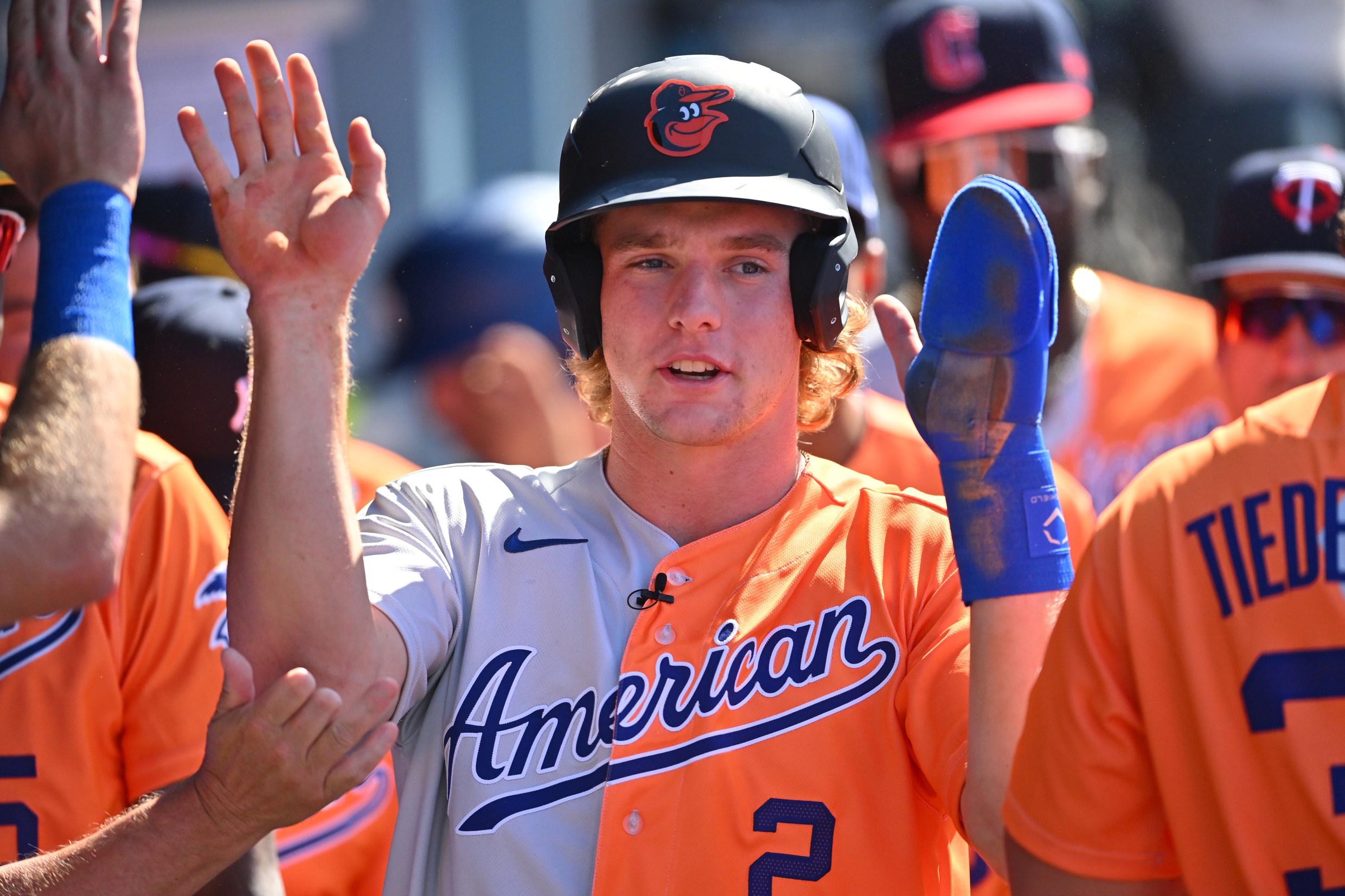 CLEVELAND—Gunnar Henderson is playing third base and batting sixth as he makes his major league debut with the Orioles on Wednesday night against the Cleveland Guardians.

“I didn’t have any idea it was coming,” Henderson said before the game. “I felt like I just needed to go into each day with the right mindset, keep myself in the right position. I felt like something good would happen.”

The Orioles decided to try the 6-foot-2 Henderson at first and second base over the past two weeks at Triple-A Norfolk. On Tuesday night, Henderson played second for the Tides before the Orioles selected his contract a day before rosters expand. Henderson will be eligible for the playoffs if the Orioles make it; they’re three games back for the final wild-card spot.

“I felt like it was adding more versatility to the bag,” Henderson said. “Whenever hopefully I got called up then I would be able to play whatever position they needed me to. Versatility certainly helps, so glad to be able to do that and help the team make a playoff push.”

“Growing up my family instilled: ‘Don’t let the outside noise get to you,’” Henderson said. “All throughout pro ball, I think I’ve done a good job of just kind of toning that out and just trying to go into each day with the right mindset, trying to get better each and every day.”

Henderson, who finished the 2021 season with Double-A Bowie, told his girlfriend, Katherine Lee Bishop, before the season that his goal was to make the major leagues this season.

“She has the text, and it’s pretty cool to be able to accomplish that,” he said. “The road’s just now starting, so if it works, keep on going.”

Late last season, Henderson was promoted from High-A Aberdeen to Bowie for the Baysox’s playoff push. Now, he’ll try to help the Orioles reach the postseason for the first time in six years.

“Being able to do it again this year and, especially, at the big-league level is going to be really awesome and really special,” he said.

Henderson is starting at third on Wednesday but said he also feels comfortable at first or second.

“I feel like I got some good work in down at Norfolk,” Henderson said. “I played a good amount of games the last two weeks at second base and first base. I feel comfortable over there, and I feel I can do it up here as well.”

Manager Brandon Hyde said Henderson would play “multiple spots in the infield, something he’s been preparing for down in Norfolk, been getting a lot of reps … He’ll be day-to-day where I’ll put him out in the infield.”

For now, Hyde probably will play Henderson at shortstop and third.

“At second, I think I have other options,” Hyde said. “I think he’d be the third or the fourth option.”

Hyde is excited to have Henderson on the Orioles, but he tries to temper expectations.

“I’m hoping he enjoys this experience tonight. The debut is a night you’re never going to forget.”

“Look at his Triple-A numbers and what he’s done there, and his defensive ability as well,” Hyde said.

Henderson is eager to get started.

“Just going into Triple-A and playing my game and showing what I can do, I felt like I was putting myself into the right position to do that,” Henderson said. “Ultimately, it happened, and I can’t thank God enough for putting me in this position, and I’m looking forward to it.”

Hall, Aguilar on taxi squad: DL Hall knew when the Orioles sent him down after his major league debut as a starter on August 13th that he’d return as a reliever.

“It’s a way that’s going to keep my innings down this year after an [elbow] injury last year,” Hall said. “I’m happy to be healthy and hopefully to finish a full season just to prove that I can do that, to myself, and to others. That’s huge for me.”

Hall made four relief appearances for Norfolk, and he wasn’t immediately comfortable.

“My first two in Norfolk, I definitely could tell that it was a little different,” he said. “But the last two or three have been really good, just trying to help in any way I can. It’s been nice, and they’ve slowly worked my way into it.”

Hall pitched a hitless 1 1/3 innings for Norfolk on Tuesday night, and said he thinks he’ll be ready to pitch for the Orioles on Friday.

“I want him to just be aggressive and attack guys in the strike zone,” Hyde said. “Whether they’re right-handed, left-handed, bottom of the order, top of the order, whatever part of the game that it’s in or whatever the leverage spot is, throw his best stuff through the zone because it’s special. We’re excited to watch him in September as well.”

Jesús Aguilar was released by Miami on August 27th, and the 32-year-old first baseman is eager to help the Orioles.

“I’m really excited about it,” said Aguilar, a right-handed hitter who’s listed at 6-3, 277 pounds. “I’ve got to say thanks to the organization for believing in myself.”

Aguilar was hitting .236 with 15 home runs and 49 RBIs in 113 games with the Marlins before his release. He said his agent called him “a couple of days ago,” to tell him that the Orioles were interested t in him.

“I was happy about it because what the guys have been doing this year,” Aguilar said. He hopes to bring “energy. I think that’s the most important thing. I think they’ve got everything.”

Hyde is familiar with Aguilar from his years as a coach with the Chicago Cubs when the first baseman put up big numbers with Milwaukee.

“Big power threat, a guy that’s going to drive in runs,” Hyde said. “Did a nice job at first base those years in Milwaukee. I think he’s just an added talented major league player on our roster, and a guy that when he’s not playing, I can pinch-hit for a power spot, an RBI spot.”

Hall and Aguilar are expected to be the two additions on Thursday when the rosters are expanded from 26 to 28. A 40-man spot must be cleared to add Aguilar.

Notes: Right-hander Travis Lakins, who’d been on the 60-day injured list because of right elbow inflammation, has cleared waivers and been assigned outright to Triple-A Norfolk. … Lee Thomas, who was a longtime major league general manager and an assistant general manager for the Orioles under Dan Duquette, died Wednesday at 86.