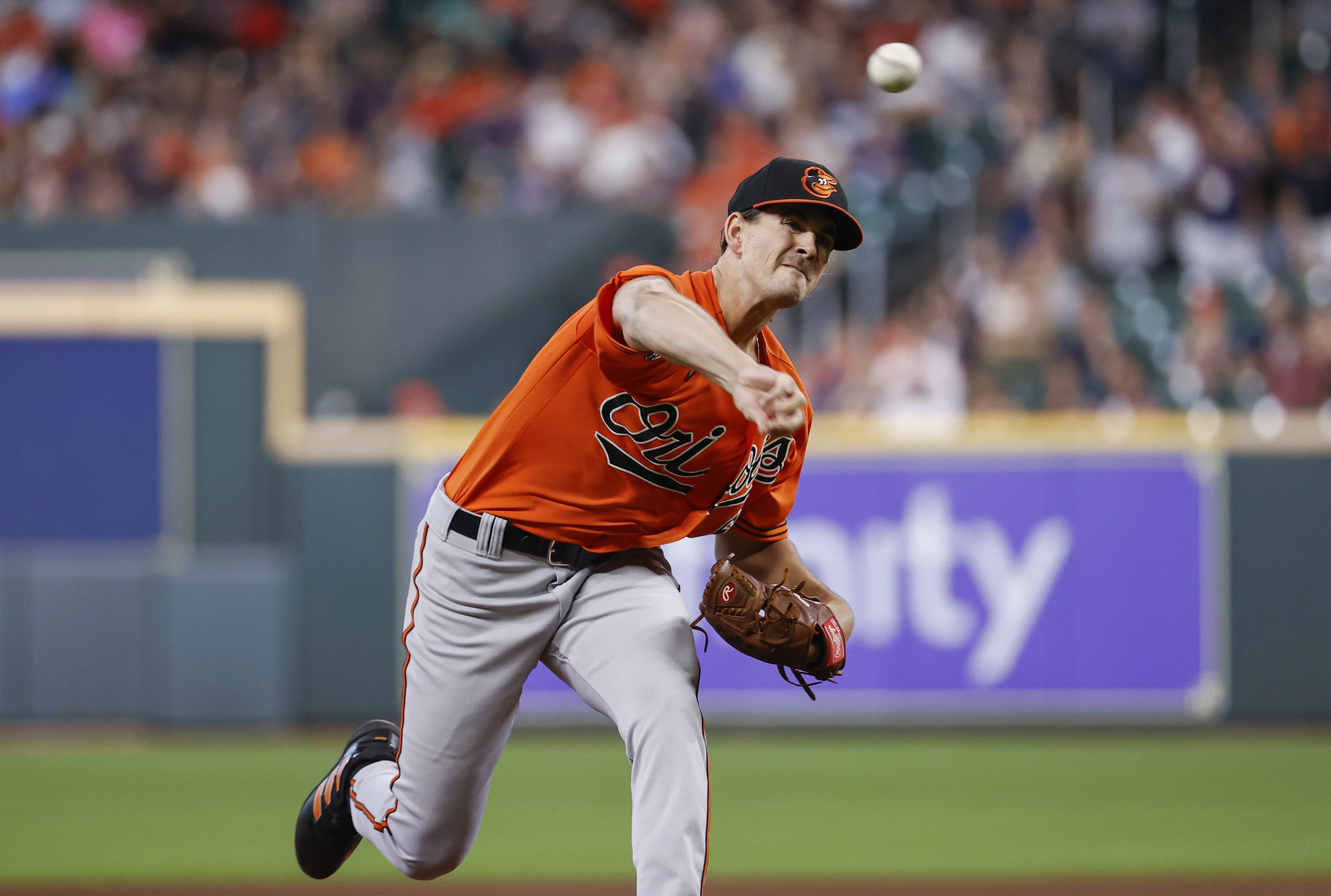 HOUSTON—The Orioles continue to surprise the baseball world. After Kyle Bradish stopped the Houston Astros, owners of the best record in the American League, on Friday night, Dean Kremer continued his run of excellent pitching.

Kremer allowed just a run on four hits in a career-high 7 2/3 innings without walking a batter and striking out three as the Orioles defeated the Astros, 3-1, before an announced crowd of 34,526 at Minute Maid Park on Saturday night.

It was the Orioles’ third straight win and guaranteed them a series win over Houston (81-47).

It was the third straight long Orioles start. Jordan Lyles pitched seven innings in the Orioles’ 11-inning win on Thursday night, and Bradish worked eight against the Astros on Friday night.

“Two deep starts from two guys who haven’t been in the big leagues very long,” manager Brandon Hyde said. “They’re showing so much improvement. That’s the biggest thing for me, the improvement that these guys are showing, the confidence, the trust in their stuff.

“You’re watching a couple of young guys really learn up at the big league level in a tight race and an important game.”

Kremer saw what Bradish did, and it inspired him to do the same.

“Watching him set the table made me feel like I could do this, too,” Kremer said.

The bullpen had been strong for months but recently it has stumbled. The starters are giving the relievers a chance to rest.

“I think it’s important regardless. One, for our sake and getting that experience as a young staff and, two, the bullpen has carried us up until this point in the season,” Kremer said. “They need a break, too, sometimes.”

Adley Rutschman doubled with one out in the third, and Anthony Santander homered to the second deck, admiring it for several seconds. It was his 23rd. After Ryan Mountcastle flied to center, Austin Hays hit his 15th home run to left against José Urquidy and the Orioles had a 3-0 lead.

“I enjoyed it. Thankfully, I was able to get the barrel on the ball and get a good swing on it and, thankfully, it was two runs on just one swing, which against this team was important to get two runs,” Santander said through a translator.

Altuve led off the seventh with a double to left and scored on a one-out single by Yordan Alvarez. Alex Bregman hit into a double play to end the inning.

“To do what they’ve done is incredible,” Santander said. “They’ve really given us the opportunity to go out and win the game.”

Kremer came out for the eighth and retired Kyle Tucker on a fly to center and Christian Vázquez on a grounder to short before former Oriole Trey Mancini singled.

“Getting out there and getting to experience the eighth is a little bit different,” Kremer said. “The more experience you get, the positive experience you can get, the better. It will help you in the long run. Of course, negative outcomes do happen, but instead of dwelling on them as we may have done in previous years, we’re learning from them and taking them step-by-step.”

Closer Félix Bautista retired each of the four batters he faced, striking out three, for his 10th save.

“I just think guys are going to get better because of the games we’re playing,” Hyde said. “With so much inexperience out there, guys are going to continue to improve. It’s great for us going forward and love how these guys are competing right now.”

Taking a series on the road from the Astros is significant.

“We’ve pitched extremely well, and we played tight defense,” Hyde said. “We got some timely hits. We’re scoring enough, it seems like, but our pitching … Kyle last night and Dean tonight, great performances. I guess they’re one of the best teams in the game … Not easy to do. I love how we’re playing the game right now.”

Rightfielder Johnny Rhodes and catcher Andres Angulo each drove in two runs as Double A-Bowie lost to Altoona, 11-8, in 10 innings.

Leftfielder Trendon Craig had three hits and drove in three runs and, in his first game for High-A Aberdeen, third baseman Frederick Bencosme had two hits as the IronBirds defeated Wilmington, 11-8.