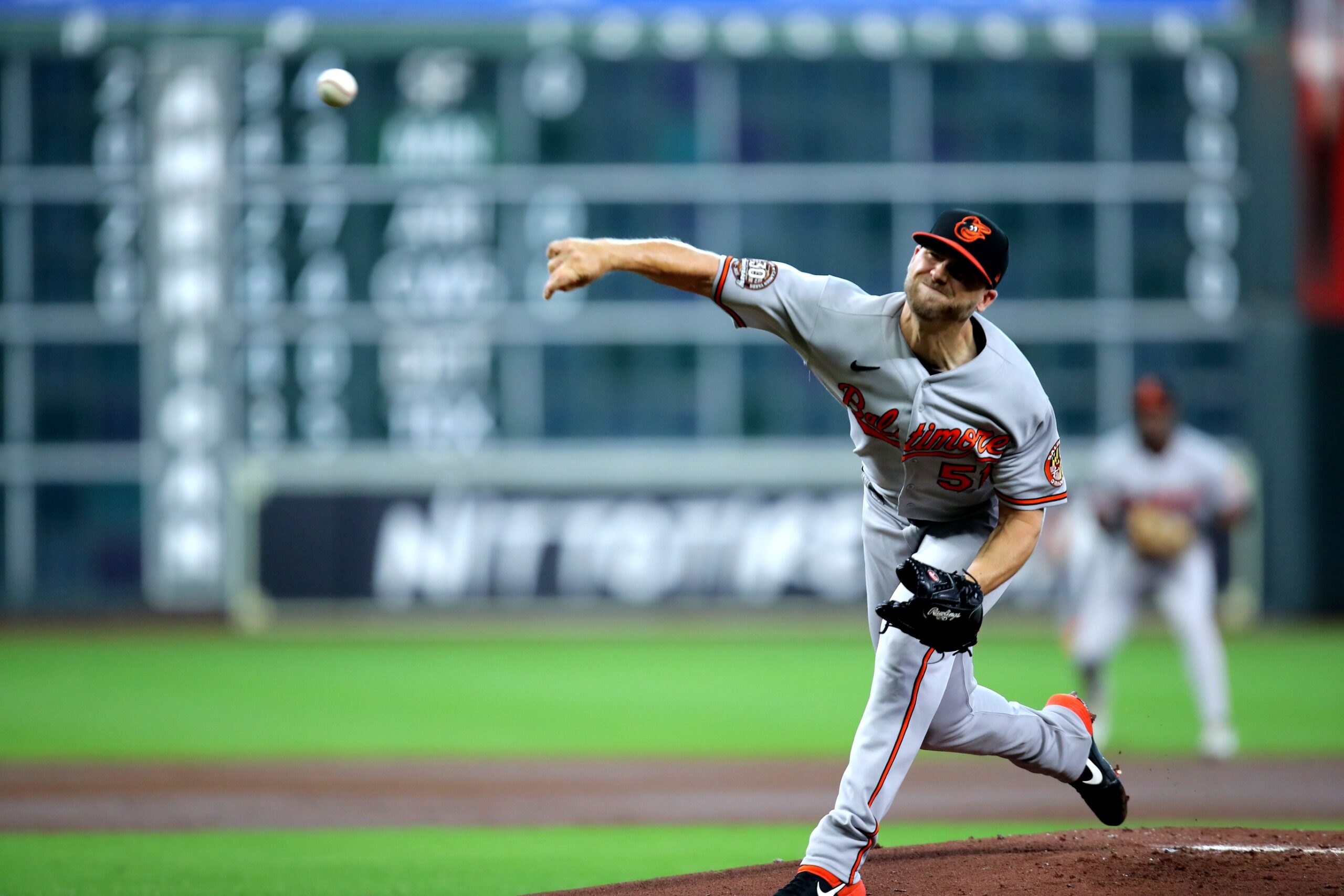 HOUSTON—The Orioles’ series against the Houston Astros at Minute Maid Park had a postseason feel — tight games, strong pitching and few runs. That last part continues to be a concern for the Orioles as they pursue a wild-card berth.

After taking the first two games against the Houston Astros despite scoring only five runs, the Orioles scored just a ninth-inning run on Sunday in a 3-1 loss to the Astros, wasting a third excellent start, this one from Austin Voth, who allowed just one hit in six-plus innings.

Baker allowed a double to Kyle Tucker, sending Bregman to third. Trey Mancini, who was 1-for-10 in the series with five strikeouts and a walk, struck out. Yuli Gurriel singled to right past a drawn-in infield, scoring Bregman and Tucker, and Houston was on its way to its 3-1 win before an announced crowd of 31,550.

“[Voth] was in a little bit uncomfortable territory in the seventh,” Hyde said about removing his starter after the walk to Bregman. “I thought that was a good at-bat by Bregman, and it might have taken something out of him. If he gets Bregman there, I leave him for Tucker.”

The Orioles (67-60) remain 1 ½ games out of the third and final wild-card position even though they went 3-for-22 with runners in scoring position.

“We’ve got to swing the bat a little bit,” Hyde said. “Offensively, we need to start scoring some more runs.”

After Gurriel’s single, David Hensley — whose first major league hit, a third-inning double, was the only hit allowed by Voth — hit into a force. Mauricio Dubón singled, and Joey Krehbiel hit Martin Maldonado on the right hand with a pitch. José Altuve struck out to end the seventh.

Voth didn’t complain about the lack of offensive support.

“It happens. You pitch well and you lose all the time,” Voth said. “Sometimes you hit, sometimes we can’t get any hits to get the bats rolling. You’ve got to focus on you on the mound and what you can do to help the team out.”

Bregman homered against Krehbiel in the eighth, his 20th.

Astros starter Justin Verlander, who entered with a 16-3 record, left the game because of right calf discomfort after three innings.

Verlander threw 28 pitches in the first inning when Cedric Mullins and Adley Rutschman singled to lead off the game. Mullins recorded his 28th stolen base and moved to third on Rutschman’s single. Rutschman stole second as well.

But Verlander struck out Anthony Santander, Ryan Mountcastle and Austin Hays. In the second, he retired the Orioles in order, striking out Rougned Odor and Jorge Mateo.

Robinson Chirinos led off the third with a single, and Mullins walked. After Rutschman struck out, Santander flied to center. Thinking Chirinos was tagging to go to third, Mullins took off for second, but Chirinos stayed at second and was thrown out in a rundown that added to the frustration.

“We had some opportunities early off Verlander,” Hyde said. “Once again, we got a starter’s pitch count up early in the first inning. Swinging at some bad pitches really let him off the hook early … just not enough offense.”

In the fifth, Mateo tried for third on a ball hit to left-center, but Dubón threw him out at third.

“They have a really good pitching staff. They have good starters and so do we,” Hays said. “We’ve got a bullpen that’s been doing great all year. Our starting pitching is just starting to hit their stride so I think that combination, just getting a little more offense going.

“We’ve done a better job recently of getting things going earlier in the game. We’ve done a great job scoring in the later innings so the progress of making starters throw more pitches and having better at-bats early in the game has been a good adjustment for us. Our team is starting to show what we can do and what we can do in the playoffs.”

In the ninth, the Orioles scored against Rafael Montero on one-out double by Santander and a single by Hays. Pinch-hitter Kyle Stowers singled, and Rougned Odor struck out to end the game. Montero registered his ninth save.

“We did not swing the bat off the bullpen,” Hyde said. “It’s a good bullpen. It’s the best bullpen or one of the top two for a reason. Just didn’t get anything going, unfortunately.”

The Orioles have Monday off and move on to Cleveland, leaders of the American League Central.

“I just thought it was two good teams pitching extremely well,” Hyde said. “We got three good starts. They have really good pitching, great pitching. Because it was such tight games, all three games, the intensity raises up a little bit. Great atmosphere here, big crowds and loud. It was a fun series. Glad we got two, but hopefully we can play well in Cleveland.”

“When we’re rolling like we are right now … things are going in our direction” Voth said. “We’re continuing to prove people wrong, I feel like. We’re just a good club that’s scrappy.”

With 35 games to play, the Orioles will need strong starts and better at-bats.

“We pitched so well,” Hyde said. “We had a bad inning today there in the seventh, but besides that, our pitching has been outstanding this entire series … I was really happy with the effort this series, and our pitching carried us through those wins.”

Wells making progress: Tyler Wells will throw a simulated game either Sunday or Monday. Wells is on the 15-day injured list because of lower left side discomfort.

“We’re still deciding what we’re going to do with him,” Hyde said. The Orioles don’t know if he’ll be a starter or reliever when he returns.

Hyde said that the Orioles probably wouldn’t use Wells or DL Hall as a piggyback starter. Hall will likely come back as a one- or two-inning reliever.

“It’ll be nice to get Tyler back as soon as possible,” Hyde said. “If we’re going to stretch him out, it’s going to take a while. If he throws two or three innings, then he rests four days, it will take a while. We’ll see. Hopefully, sooner than later.”

Baker on O’s, Mancini: Houston manager Dusty Baker was impressed with the Orioles.

“They have really good pitching,” Baker said before Sunday’s game. “They play good defense, and they have a different attitude. They’re playing good ball and they find ways to win.”

Mancini, who was the designated hitter on Friday and the leftfielder the past two days, has fit in.

“He’s a good teammate, very good teammate, and he has a lot of power,” Baker said. “We’re trying to figure out where I’m going to play him. You guys probably had the same problem.

“He enjoys being here. I’m sure he misses over there some because you’ve been somewhere a long time, and you’re such a popular person when you’re there. I guess that means that we’ve got to find a way to play him the best place where he can help us.

“He’s more of an offensive player than a defensive player. He’s working hard on his defense probably the same way you guys did over there.”

Kremer expected to pitch in WBC: Dean Kremer would like to pitch for Israel in the World Baseball Classic, but no formal request has been made to the Orioles. The Orioles will approve the request and expect that several other players will perform in the March 2023 event.

Chayce McDermott allowed one run on one hit in five innings, walking two and striking out four.