Bradish allows 2 hits in 8 innings in Orioles' 2-0 win over Astros; Tate strikes out Mancini for final out; Elias on playoff push - BaltimoreBaseball.com 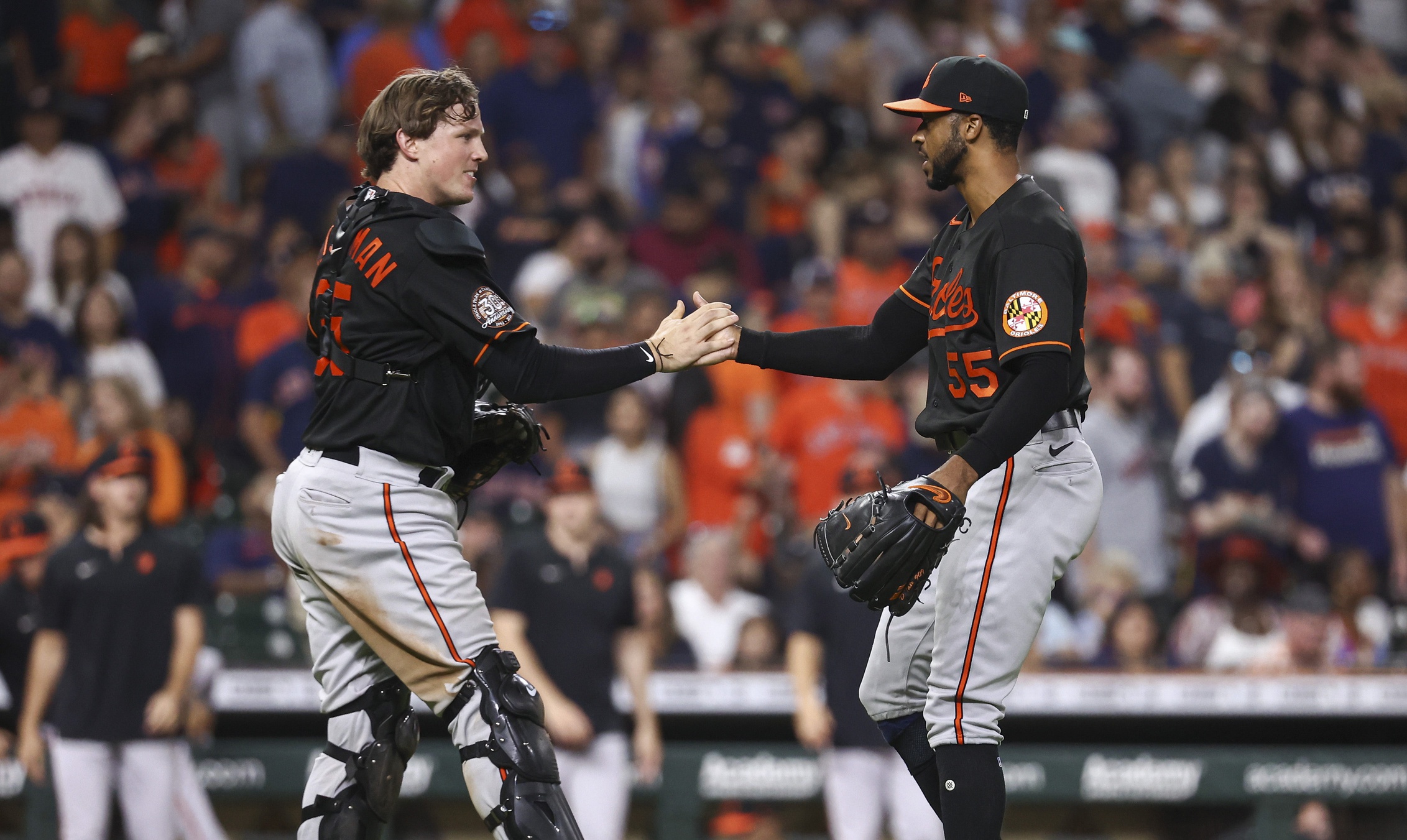 HOUSTON—The Orioles have been waiting for more than three months for starting pitcher Kyle Bradish to win his second major league game. On Friday night, he finally did, and it was impressive.

Bradish became the only Oriole starter to complete eight innings this season, allowing just two hits as the Orioles defeated the Houston Astros, 2-0,  before an announced crowd of 31,035 at Minute Maid Park.

On May 10th, Bradish struck out 11 when he pitched seven innings in a 5-3 win at St. Louis for his first win.

On Friday, Bradish gave up singles to Kyle Tucker in the fourth and Alex Bregman in the seventh. Bradish (2-5) walked two, hit a batter and struck out seven against Houston, which has the best record in baseball at  81-46.

“There were some extra nerves today facing basically the number one team in the league,” Bradish said. “Just another game.”

It was the longest outing for an Oriole starter since John Means pitched a no-hitter in Seattle on May 5th, 2021.

“Around the fourth or fifth inning, everything sharpened up even more than it was,” Bradish said. “That’s when was I like, ‘we can get deep in this one.’”

After the seventh inning, Bradish knew he had more left.

“They came up and asked how I felt, and I was like, ‘I’m just getting started,’” Bradish said. “I felt really good, velo was still there.”

Bradish, who missed five weeks because of elbow inflammation, had gone 12 starts without a win.

“What an impressive performance on the road to go eight shutout against the Houston Astros in your rookie year, pretty special,” Oriole manager Brandon Hyde said.

Hyde was without closer Félix Bautista, who pitched a career-high two innings in relief on Thursday night.

“I was considering sending him [Bradish] back out for the ninth inning as well,” Hyde said. “He hasn’t been in that territory, that part of the lineup. It’s very, very difficult.”

Cionel Pérez allowed one-out singles to Yordan Alvarez and Bregman in the ninth. After Tucker flied to right, Dillon Tate stuck out former Oriole Trey Mancini on three pitches for his third save.

“It can’t be written up any better than that,” Tate said. “I’ve kind of been thinking about that for a few weeks. Didn’t know how it was going to play out and it was funny that I found myself on the mound face-to-face with him. Pretty crazy.

“I didn’t think it would come down like that, but it’s funny how this game is sometimes. Full circle sometimes.”

Mancini was hitless in three at-bats and a walk in his first game against the Orioles since he was traded on August 1st.

“I really didn’t have much time to think,” Tate said. “It was, ‘we need to win the game,’ and, ‘hey, let’s get this guy and be on our way.’ Everything happened really, really fast.”

Mancini walked in the second inning, struck out with runners on first and third in the fourth and hit a fly ball to deep right field with Bregman on first for the second out of the seventh before his dramatic at-bat in the ninth.

“That’s honestly the one guy I did not want out there,” Hyde said. “As fate has it, he’s the guy who comes up in a winning-run situation, and Dillon Tate throws three outstanding pitches against him.”

Bradish enjoyed seeing Mancini but wasn’t the one to face him with the game on the line.

“It was fun. I got to talk to him a little pregame, and I told him not to give away too much on me,” Bradish said. “I was a little amped up to face him that first [at-bat], and then with runners on in his second at-bat, I kind of had it dialed up.”

In the first four innings, the Orioles were 0-for-8 with runners in scoring position and left six runners on.

“When you have opportunities against a really great offense and a really good team and you waste them, you feel like the chance is going to come back to get you in the end,” Hyde said.

Houston starter Lance McCullers threw a 1-2-3 fifth before Cristian Javier (7-9) replaced him and allowed a two-out single to Kyle Stowers in the sixth, and a two-run home run to Ramón Urías, his 14th.

“I was really upset after my first at-bat,” Urías said through a translator. “I really felt like I could have came through and helped the team get out in front during that first AB. Second time around, I felt like I was able to do a much better job. Thankfully, I did.”

Elias on Orioles’ progress: General manager Mike was asked to compare what the Astros went through and what the Orioles are going through.

“We’re not there yet,” Elias said. “This is an Astros franchise that’s gone very deep in the playoffs, won a championship, probably have a few more ahead of them. We’re nowhere near those heights yet, but I expect the Orioles to be a playoff team, hopefully this year, and then in contention every year going forward.

“That’s really all you can say in our division. To be in contention for the postseason, it’s such a tough division and it’s so strong that it’s hard to say more than that. This is a team that’s back in the fight and it’s a team to be reckoned with in the AL East.”

Elias on Gunnar Henderson: “It’s a tough thing to be too critical about him because he’s doing so well at his age [21], and he is by far the youngest player at Triple-A and not starting the year at Triple-A,” Elias said. “I don’t want to nitpick aspects of his performance. What he’s doing now at Triple-A bodes very, very well for his future.

“But if you’re talking about falling in love and his immediate ability to hit the ground running in the 2022 season, his strikeout rate in Triple-A is a little bit high, his numbers right versus left are not ideal for his long-term development, and he’s still learning some things out in the field.

“Like we’ve seen recently with Kyle Stowers, he obviously had a huge moment [Thursday] night that was a lot of fun. It’s tough transitioning to the major leagues, and it’s hard to take your Triple-A performance and assume you’re going to paper that over in the big leagues right away. We’ll see where this goes with Gunnar, but we’re very proud of him and pleased where he’s at.”

Rightfielder Davis Tavarez hit a grand-slam to lead High-A Aberdeen over Wilmington, 9-3. Peter Van Loon (10-3) allowed an unearned run on two hits in five innings. Daniel Federman allowed a run on three hits in four innings for his second save.

First baseman Creed Willems hit a three-run home run in the bottom of the ninth to lead Single-A Delmarva to a 4-2 win over Lynchburg.