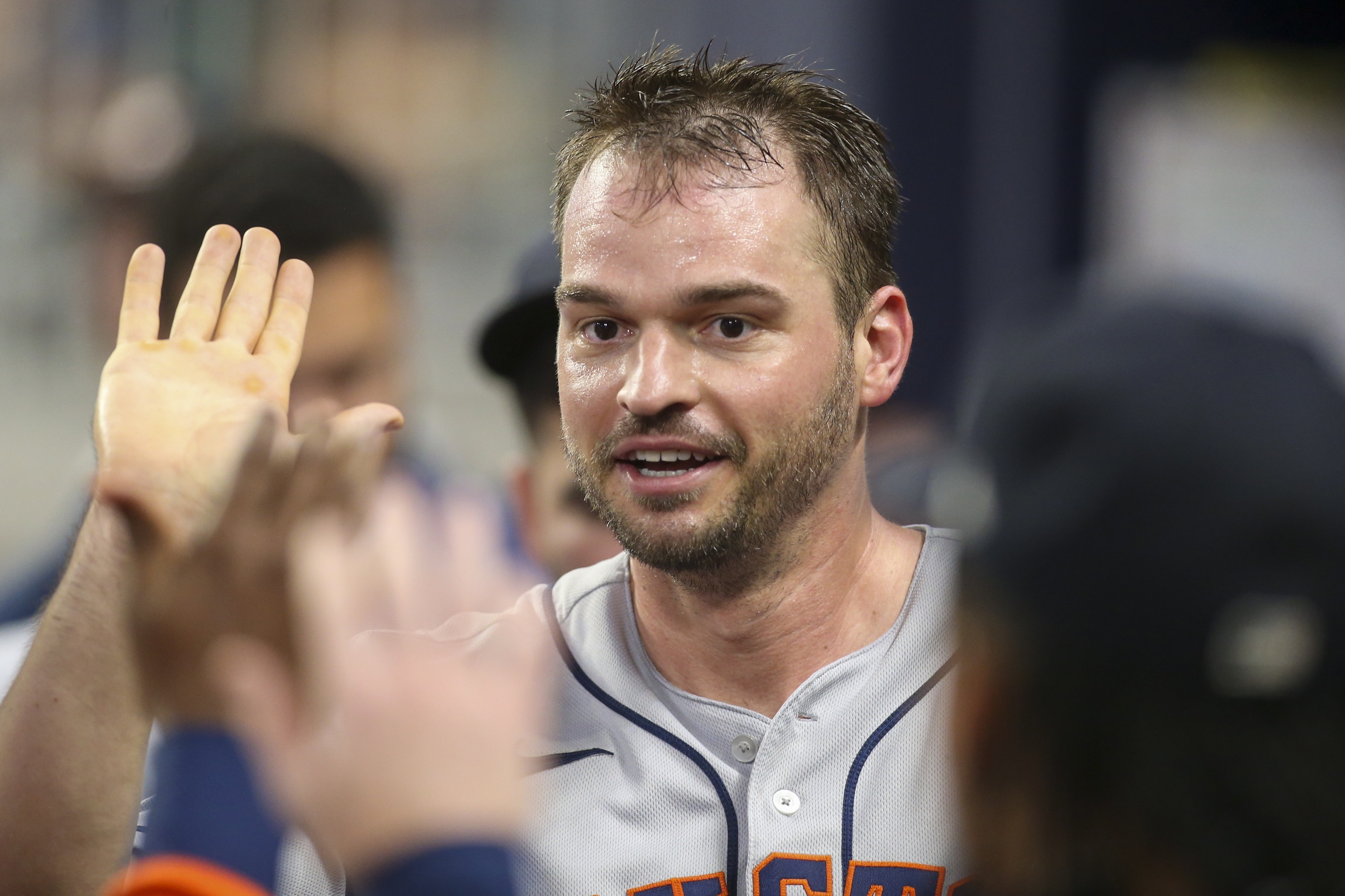 HOUSTON—Trey Mancini was traded from the Orioles to the Houston Astros on August 1st, but he’s enjoyed his time with his new team so much that it seems more than 25 days since the deal.

“It feels like longer. It feels like I’ve been here for a longer time than a few weeks, to be honest,” Mancini said on Friday.

“It was like a day or two of just getting settled, getting all the craziness over with. Once that was over with, I felt welcomed with open arms here. The  second I got traded here, I fit in really well. It’s been a great transition, easier than I could have ever imagined.”

“It’s been a cool new chapter in my life,” Mancini said. “I’ve really been enjoying my time here and enjoying the guys. Especially after being in Baltimore for so long, 10 years, my first couple of days I felt like a rookie again.

“I feel like I’ve settled in and fit in really well. It’s been a great experience.”

“I think it’s worked out for both of us,” he said. “I’ve really been enjoying my time here and I love being a part of this team, and they’ve continued to play really well even after [closer Jorge López] and I got traded.”

Mancini said it won’t be hard to focus on the game and not the opponent.

“It’s pretty easy for me to put emotions aside and just go out there and play,” he said. “I’ve played against my friends since I was a kid. In professional baseball, you have a decent amount of friends that you played with and against that you end up facing. That’s just part of the game. It’s [like] any other game.”

Orioles manager Brandon Hyde and a few other early arrivals chatted with Mancini on Friday afternoon, and he spent an extended time chatting with players and staff during batting practice.

“It’s just great to see my friends again, people that I care about,” he said. “But at the same time, it’s just another baseball game.”

Hyde enjoyed catching up with Mancini.

“To see him in Astros gear was unusual, but great to see the smile on his face,” he said. “Good to see him. He’s a friend, always pulling for him, except for these three games. He’s given these guys a huge spark. He’s played extremely well since he’s gotten here, so I’m very happy for him.”

Austin Hays, a longtime teammate, said he was prepared for the reunion.

“Once the game starts, we’re playing nine innings against another team,” Hays said. “He’s on the other side. We’ll do everything we can go get him out and make him have a tough night tonight.

“I think he made a huge difference with this organization and turning it around. Being a big part of the culture of this team right now, and how close everyone is, the camaraderie, just everybody being friends with one another, getting together away from the field.”

“While I don’t want to see him go off on us this weekend when we’re trying to win these games, it means a lot for me that he’s in a team that’s such a good fit for him,” Elias said. “I root for Trey every night.”

Elias on Henderson, Hall, Rodriguez:  Elias said that the Orioles continue to monitor their top prospect, infielder Gunnar Henderson, but didn’t predict that he’ll be up by September 1st when the rosters expand from 26 to 28.

“No decisions have been made, but it’s obviously something we’re monitoring, and very pleased with where he’s at as a 21-year-old that started the year in Double-A to now being in a daily conversation about possibly coming and helping a team down a wild-card stretch, I think, is a great accomplishment, but we have to see what happens the rest of the way.

Elias said that “he’s certainly a candidate” for the extra position player spot on September 1st.

“I don’t know who those are. Everything changes day-to-day in baseball. Somebody could get hurt. We’re going to have to see and take it. He’s put himself into a spot to be considered. He’s still having ups-and-downs in Triple-A on a nightly basis, and we’re watching that, too.”

After pitching prospect DL Hall made his major league debut with a start at Tampa Bay on August 13th, he was immediately optioned to Norfolk and Hyde said that he’d return for the stretch run as a reliever.

Elias indicated that Hall could be the pitcher added on September 1st.

“I hope so,” Elias said. “Things change, but that’s kind of the plan. We’re looking forward to seeing what he can do out of the bullpen. He had one really good outing the other day. The first one was a little choppier. I think  this last one went [as well] as what you want to see, two innings, four strikeouts, no walks.

“I think it’ll be a really good way for him to get big league experience, but also, this is a ‘pen that’s had a huge workload this year. They’ve been unbelievable. We traded our closer [Jorge López] at the deadline, and these guys are getting tired and having a reinforcement of that type of talent will be nice.”

Elias said he expects Hall to come to spring training as a starter in 2023.

Elias also said that top pitching prospect Grayson Rodriguez is showing continued improvement in his rehab from his lat injury.