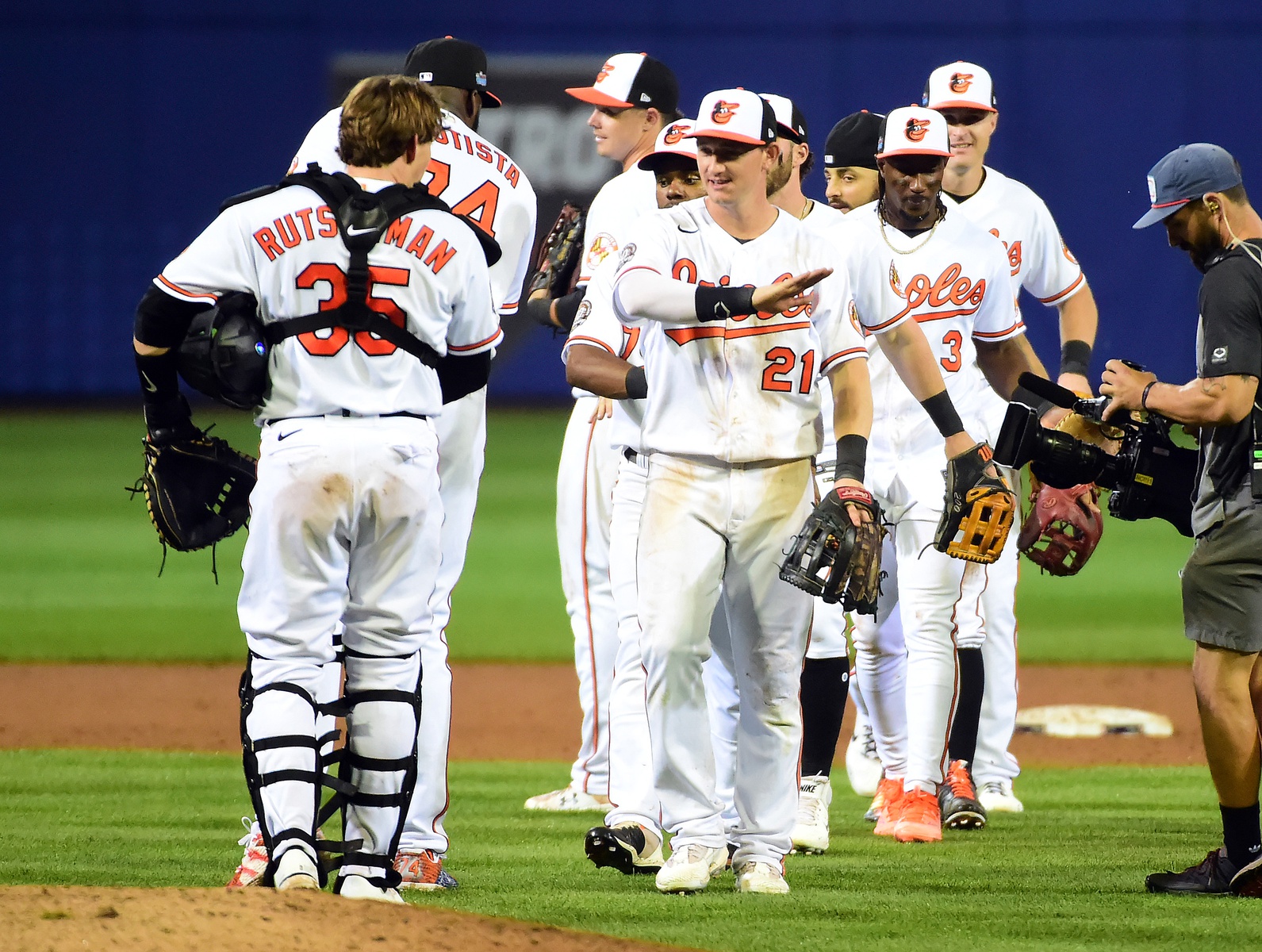 Here’s the second part of our mailbag. Questions are edited for length, clarity and grammar.

Question: The Orioles now, I believe, have a solid team. The only question is what happens to the present players when the talent in the minor leagues is ready to be promoted? From: Bill Bellistri via email

Answer: Bill, some of those players will remain with the club, perhaps as reserves, some will play for Triple-A Norfolk, others will be traded, and some will leave as free agents or be released.

Question:  I’ve noticed during after-game interviews that the Orioles’ Spanish speaking players usually have an interpreter accompanying them. It seems the players understand the English question and usually only need the interpreter to translate a player’s responses into English. They seem to understand the interviewer’s questions in English.I’ve  also noticed players communicate well in the dugout no matter what their native language. Is it that the players are learning each other’s language?  From: Chris Kiyak via email

Answer: Chris, three of the Orioles’ Spanish speakers — Robinson Chirinos, Rougned Odor and Ramón Urías — speak English fluently and don’t require an interpreter. Jorge Mateo and Anthony Santander both speak English but ,in formal interviews, they feel more comfortable using a translator. Félix Bautista and Cionel Pérez have the most need for a translator.

Baseball is the same whether played by English speakers or Spanish speakers, and players seem comfortable with each other and their ability to communicate.

Question: What’s the latest update on John Means? From: Messer Andy via email

Answer: John Means underwent Tommy John surgery in April, and he’s been around the club during the current homestand. Recovery time for Tommy John surgeries are usually between 12 and 18 months, and Means has said that he’ll have a better idea of his timetable for 2023 during the fall, but he’s pleased with his progress so far.

Question:  Do baseball contracts have conduct clauses? Didn’t the Orioles use that in an attempt to get out of the Sidney Ponson contract? What made me think about the morals clause is what has happened with Fernando Tatis Jr. He injured himself riding a motorcycle in the offseason and then he got caught using a steroid. Would the Padres have a leg to stand on if they tried to void Tatis’ contract? From: Warren Brock via email

Answer: Warren, contracts can be voided if players commit criminal acts, but teams are rarely successful in doing so. The Orioles ended up paying Ponson. Teams and players often agree on prohibited activities such as basketball or skiing. I don’t know what was in Tatis’ contract, but I think they’d like to have his talent and wouldn’t want to void his contract, even though they’re incensed by his recent suspension for performance-enhancing drug use.

Question: If the Orioles were to play a key game to try to clinch a wild-card spot, what pitcher would they use? From: Cristian Sena from the Dominican Republic via email

Answer: Cristian, I think Jordan Lyles is the most experienced pitcher the Orioles have, and I think they would use him if they could.

Question: There may be three of four rookies on next year’s team, perhaps Gunnar Henderson, Grayson Rodriguez and DL Hall. Who else could make the team and how does this change team chemistry? From: Julius Silvestri via email

Answer: Julius, assuming Kyle Stowers, who was just called up, doesn’t qualify as a rookie, you could have Henderson, Rodriguez, Hall and perhaps another infielder, Jordan Westburg, and maybe a young reliever or two.

If those players contribute to winning, it improves team chemistry. Of course, you need some veterans to help mentor, too, but the rookies the Orioles have called up this year, Adley Rutschman, Terrin Vavra and Stowers seem to be quite mature.

Having smart veterans like Robinson Chirinos and Rougned Odor around helps. They’ve been through playoff pushes, and that experience is vital.

Question:  What is the special sauce for the current success and our long-term prospects in the coaching staff? Which coaches do you think are making the big difference between the Duquette years and now, and what are they doing differently to develop raw talent so much more effectively? From: Ben Schneck, New Orleans via email

Answer: Ben, it’s a combination of things. There were good players drafted before Mike Elias got here, Austin Hays, Ryan Mountcastle, Cedric Mullins, John Means, Grayson Rodriguez and DL Hall. They were coached well in the minors, and the Orioles also have been able to find undervalued players who didn’t play well elsewhere and who’ve been able to shine here.

Question: How are the international players doing? Any idea who might be first to make it to the majors? From: Larry Schultz via email

Answer: Larry, the Orioles knew that signing 16- and 17-year-olds was a long-term process. It may take five years or longer to make the majors.

There are two interesting, less-heralded names to keep an eye on. One is outfielder Luis Valdez, who’s at High-A Aberdeen. In 95 games at Single-A Delmarva, he stole 59 bases and is off to a nice start with the IronBirds.

Infielder Frederick Bencosme is at Delmarva, and he’s hitting well. Valdez and Bencosme are less-publicized players.

Question:  My question concerns the future of the infield. Do you see the infield prospects in the farm system replacing Ramón Urias, Jorge Mateo or Rougned Odor in next year’s lineup? From: Richard Poffel via email

Answer: Richard, I think it’s possible that Gunnar Henderson, Jordan Westburg and Terrin Vavra, who’s already here but spent the weekend on the paternity list, could be playing the infield next year. It’s possible that Mateo and Urías are back, and it’s also possible, if not probable, that Mateo stays at shortstop based on the season he is having.

Question: As a passionate but non-expert O’s fan I’ve always described them as being able to spend money when they are competitive but that they can’t afford to spend when they aren’t. Do you have any insight into what they might be looking for in the free-agent market in the next year or two? Also, do you have any feel for what kind of player salary budget the Orioles might be willing to have? From: Dan Amspacher via email

Answer: It’s always better to have younger and cheaper players. For example, Adley Rutschman is being paid less than Robinson Chirinos. Voth has been an excellent pickup, and the Orioles have several players who haven’t cost much that they’ve acquired. Lyles has done an excellent job at going deep into games and mentoring young pitchers.

Question: Any word on why Seth Johnson had Tommy John surgery earlier this month when he was injured in May. When we acquired him all reports said “will need TJ”. What was the holdup?  From: Allen File via email

Answer: Alan, Seth Johnson was sent to the Orioles from Tampa Bay as part of the Trey Mancini trade. I don’t know the specifics, but sometimes players and teams try to see if Tommy John surgery can be avoided. They’ll try non-surgical rehab because of the 12-to-18 month rehab.

Question: The first overall pick on Day 2 of this year’s draft was Nolan McLean, Mike Elias’ highest drafted pitcher ever with us. How did the Orioles not know his demands and preferences and fail to sign him? From: Craig Russell Santa Rosa O’s Fan via email

Answer: Craig, I think they thought he was going to sign. At Jackson Holliday’s introductory press conference, his father, Matt Holliday, who knows McLean well, said he felt good about Jackson’s signing with the Orioles in part because McLean would be there as a teammate.

McLean was the highest pick in the draft by any team not to sign, but as compensation the Orioles will receive an extra pick in the 2023 draft.

Question: What is written on the catchers’ lower arm cheat sheets? From: Tom Shaw via email

Answer: Tom, those are pitch selections. Catchers and pitchers are using PitchCom, a way for the catcher, pitcher and two fielders to send signs electronically. It’s an attempt to speed up the game and prevent sign stealing.

Question: When do rosters expand in September and who will we see promoted? From: Paul in New Mexico

Answer: Paul, rosters expand by two players to 28 on September 1st, which is just nine days away. I think the Orioles will add DL Hall, and if he isn’t promoted this week, Gunnar Henderson.

When Hall made his first start on August 13th, Brandon Hyde said he would be back at the end of the season as a reliever, and I know the Orioles are intrigued by Henderson.