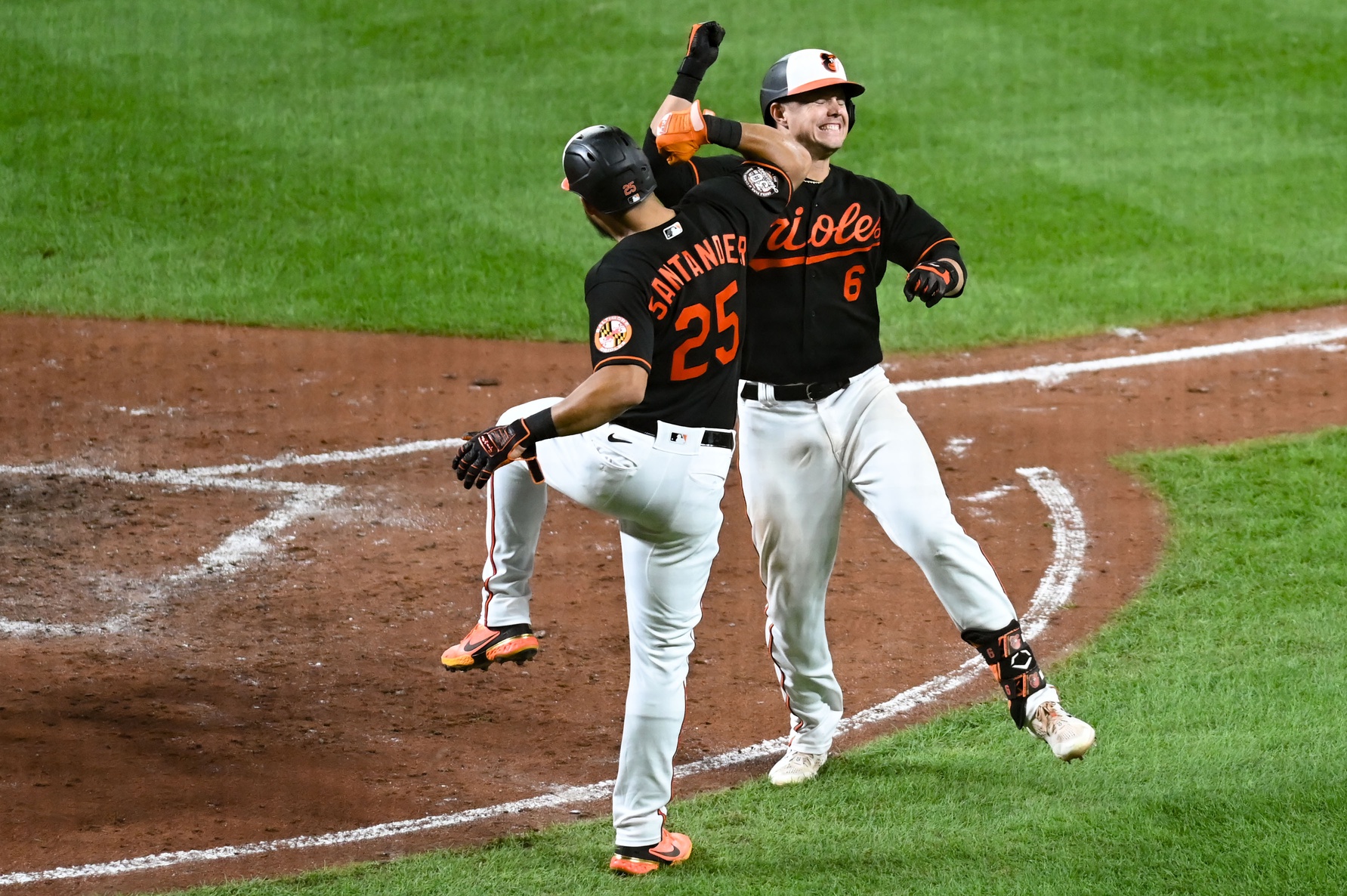 BALTIMORE—After scoring just three runs in their last two games, the Orioles’ offense was dominant, though their pitching and defense was shaky.

They hit five home runs, equaling a season high, and their 11 extra-base hits were one shy of their franchise record.

“I thought our at-bats were the best they’ve been all year,” manager Brandon Hyde said.

The win put them within 1 ½ games of the Tampa Bay Rays for the third wild-card spot.

“We haven’t had many games like that on the mound,” Hyde said. “Great to see a lot of our guys drive the baseball. I’ll take that out of tonight’s game.”

Anthony Santander drove in four runs with three hits. Santander and Adley Rutschman were a triple short of the cycle. Every Oriole starter had at least one hit except for second baseman Rougned Odor.

“[There were] some sort of ‘wow’ moments to see everything going on,” Mateo said through a translator. “The pitchers didn’t have their best day today, but we were able to go in there and fight and back them up to today, and thankfully the offense was really swinging.”

Mateo thought he missed first base and had to go back and retouch it before resuming his trot.

Boston took a 4-3 lead against Oriole starter Jordan Lyles in the third. Alex Verdugo scored on an infield out by Christian Arroyo, and Xander Bogaerts scored on a single by Rob Refsnyder.

Santander hit a two-run home run, his 21st, just inside of the right-field foul pole against Red Sox starter Kutter Crawford to give the Orioles a 5-4 lead. With one out, rightfielder Kyle Stowers, playing his first home game after his Friday promotion from Triple-A Norfolk, singled up the middle. He advanced to third on a double by leftfielder Austin Hays.

Odor flied to center, and Stowers scored, but Hays was out trying for third, and the Orioles led, 6-4, after three.

Bogaerts was called out on a third strike that appeared low and was ejected by home plate umpire Todd Tichenor to end the Boston fourth. Red Sox manager Alex Cora was ejected moments later.

The Orioles scored four runs after two were out in the bottom of the fourth. Rutschman and Ryan Mountcastle hit two-run home runs. It was Rutschman’s eighth and Mountcastle’s 17th, and the Orioles led, 10-4.

Crawford was removed after allowing nine runs on 11 hits in 3 2/3/ innings.

Lyles, who was taken out after 4 1/3 innings in his previous start last Sunday at Tampa Bay, worked only four innings, allowing four runs on nine hits.

“It was awesome to see how the guys responded after my lackluster performance,” Lyles said. “It was a different one. This was once, twice in a 162-game season type of game. It was a crazy one.”

Keegan Akin replaced Lyles for the fifth and had a disastrous inning. The Orioles committed two errors, a throwing error by Odor on a grounder by Rafael Devers to open the inning and a catcher’s interference by Rutschman on Reese McGuire. The errors led to five unearned runs.

“Unfortunately, I started this game with the runs and the hits, and all that kind of stuff,” Lyles said. “I’ve been a part of this game long enough to realize, ‘hey, we’re watching a little something special.’”

Boston leftfielder Tommy Pham hit a three-run double with two out and, after an RBI single by Verdugo and a walk to Jarren Duran, Nick Vespi (5-0) relieved Akin. Devers flied deep to right to end the Boston fifth with the Orioles leading, 10-9.

“I was uneasy until two outs in the ninth inning,” Hyde said. “A game like this, it was obviously a weird night, You’re kind of expecting after a while for some things to happen that weren’t going to go your way. You didn’t know what was going to happen. Fortunately for us, we pitched well the last three innings.”

The Orioles scored five runs in the fifth. Ramón Urías led off with his 13th home run. It was the Orioles’ fifth, equaling a season high. A two-run, ground-rule double by Santander, a run-scoring single by Mountcastle, and a dribbler up the middle that the Red Sox failed to handle was scored an RBI double by Hays to give the Orioles a 15-9 lead after five.

An RBI single by Reese McGuire in the sixth against Dillon Tate cut the lead to 15-10.

“After I left, I became a fan,” Lyles said. “Every fan that paid for a ticket, they definitely got their money’s worth and plus some, for sure.”

Notes: Kyle Bradish (1-4, 6.38) will face Michael Wacha (7-1, 2.44) on Saturday at 4:05 p.m. It’s Boog Powell Bobblehead Day. The first 20,000 fans 15 and over receive a bobblehead. … Powell will be interviewed by Dan Connolly of The Athletic on Saturday morning at the SABR (Society for American Baseball Research) convention at the Hyatt Regency, 300 Light Street. On Saturday afternoon, there will be a panel on the history of Oriole Park at Camden Yards with Janet Marie Smith, who designed the ballpark, former Oriole president Larry Lucchino and former Oriole public relations director Charles Steinberg. Tickets are $115.

Birds of a feather: Recently, Ravens coach John Harbaugh wore an Orioles cap at training camp and expressed his respect for the team and Hyde.

“That was special,” Hyde said. “I appreciated it very much. Our team saw it, too … A lot of guys on our team saw it that afternoon. It pumped everybody up. For somebody like that who we have so much respect for, and what he’s done, the kind of leader he is, to talk so positively, I know he watches a lot because he’ll send me texts after games sometimes. For him to follow us and to be a fan, that means a lot.”