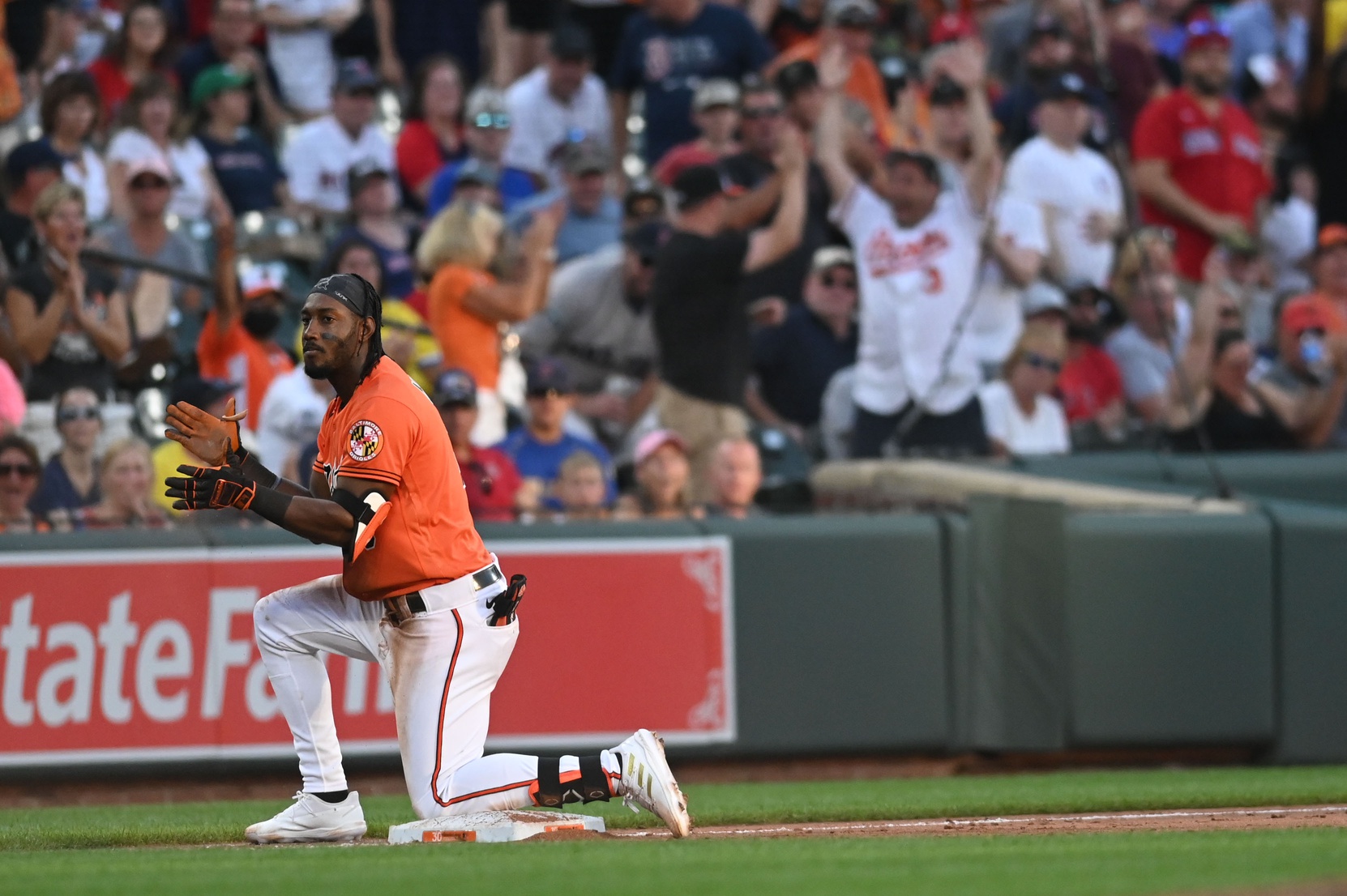 BALTIMORE—A day after the Orioles produced a season-high 15 runs and 11 extra-base hits, their offense was shut down again.

The Orioles lost to the Boston Red Sox, 4-3, before an announced crowd of 34,939 at Camden Yards on Saturday. It was their third one-run loss in the last 10 games, and they’ve lost six of their last 10 to fall 2 1/2 games behind Tampa Bay for the third wild-card spot.

Two seventh-inning runs got them close, but a key tack-on run in the ninth by Boston provided the difference.

The Orioles were without centerfielder Cedric Mullins, who fouled a pitch off this right foot in Friday night’s game. Manager Brandon Hyde said he hopes Mullins will play on Sunday in Williamsport, Pennsylvania, and he’ll be reexamined on Sunday morning.

“It’s a bruise. He got it on a little tender spot on his foot,” Hyde said. “Limping around, and unavailable today.”

Oriole starter Kyle Bradish pitched 5 2/3 innings, his longest start since his only major league win on May 10th in St. Louis when he threw seven innings and struck out 11.

Bradish (1-5) allowed three runs on nine hits, striking out six without a walk.

“I’m getting more comfortable in being in situations with runners on,” Bradish said. “Being able to execute pitches and getting out of jams, made a few plays on defense today to help me out.”

Consecutive singles by Kevin Plawecki, Christian Arroyo and Alex Verdugo in the fifth gave Boston (60-61) its first run. A two-run homer by Kiké Hernandez, his sixth and first since May 29th against the Orioles, put the Red Sox ahead, 3-0, in the sixth.

“Made one bad pitch,” Bradish said. “Tried to go up and in with a fastball. Left it up over the middle and he took advantage of it.”

It was Bradish’s fifth start since returning from a five-week stint on the injured list because of right shoulder inflammation.

“He pitched into the sixth,” Hyde said. “That’s a tough offense to go three times through. He kept us in the game. We didn’t have enough offense today.”

In the last week, the Orioles have fallen behind in four games and lost them all.

“We’ve been working to get a lead on the scoreboard,” catcher Robinson Chirinos said. “Offense knows it needs to get better. The guys are working hard to score early. When we score early, we win most of the games, and we know that. In the last six weeks in the season, we can support our pitcher early in the game and bring our nasty relievers to keep us in the game.”

Wacha followed up on his two-hit, seven shutout innings against the Yankees on August 14th.

“We had a really tough time getting a rally going against him,” Hyde said. “Good to see us make a run late, like usual, but we just came out a run short today.”

Austin Hays singled with one out in the sixth and, after a two-out walk to Anthony Santander, John Schreiber relieved Wacha. Schreiber, who allowed only one hit in two innings against the Orioles on August 11th, struck out Ryan Mountcastle.

The Orioles scored two runs in the seventh. Ramón Urías led off with a single. Jorge Mateo singled and, when Boston rightfielder rightfielder Jarren Duran made a poor relay throw to shortstop Xander Bogaerts, Urias went to third and Mateo took second.

Urías scored on an infield out by pinch-hitter Kyle Stowers, and Mateo scored on a wild pitch by Schreiber to cut the lead to 3-2 after seven.

Adley Rutschman singled with one out in the bottom of the eighth against Garrett Whitlock, but Santander struck out and Mountcastle flied to right.

Singles by Duran and Plawecki and a double by Arroyo against Bryan Baker in the ninth gave the Red Sox a 4-2 lead.

Mateo tripled with one out in the ninth and scored on another infield out by Stowers, but Rougned Odor flied to center, and Whitlock had his fifth save.

“In that seventh and the ninth, we’ve done it quite a few times,” Hyde said. “We have really good at-bats late in the game, got some big hits and Rouggie missed that ball with two outs in the ninth.”

Chirinos thought another Oriole comeback was going to happen, but the offense is struggling.

“You guys know this team. We never give up,” Chirinos said. “We use a [phrase] to identify this team: ‘We’re never out of the game,’ even with the last out … We know we can do that. Today we’re just short. Hopefully, tomorrow we’ll win that series over there.”

Notes: Gunnar Henderson, who started at first base for Triple-A Norfolk for two games, started at second base for the first time on Saturday night. … The Orioles and Red Sox will play in the Little League Classic on Sunday at 7 p.m. in Williamsport, Pennsylvania. The game will be shown on ESPN. Dean Kremer (5-4, 3.58) will face Nick Pivetta (9-9, 4.28) … The Orioles have exceeded 1 million fans this season. Their season attendance is 1,015,069. … Infielder Adam Hall has been promoted from Double-A Bowie to Norfolk.

Means with team: Starting pitcher John Means, who is recovering from Tommy John surgery he had in April, said things are going well.

“I’ll start throwing in a couple of months and go down to Sarasota after the New Year. That’s when it really starts to build up,” he said.

While he’s made occasional visits to be with the team, Means has been a regular viewer and is enjoying the resurgence.

“It’s been awesome,” Means said. “It’s definitely my motivation to get back and get stronger and come back and not try to screw anything up, keep the vibe alive and not mess anything up. I try to come back as much as I can to feel a part of it.

“All the little things, it seems like they’re taken care of, not to get too up, too down. It’s been very logical and not to emotional, which is very hard to do as a young starter.”

Boog’s bobblehead day: Three days after his 81st birthday, Boog Powell bobbleheads were handed out to fans, and the Oriole great is also enjoying the team’s surprising success.

“I haven’t missed a game,” Powell said. “I’ve been watching every one. It kind of reminds me of 1966. The way that we felt as a team, we knew we’re going to kick your [butt] , and that’s exactly what these guys are like. That’s what I see in their actions and reactions on the field. They’re very exciting, and having fun, too.

“A couple of years ago, I’m sitting there watching, ‘why are they doing that?’ All of a sudden, everything kind of came together, the whole thing. They’re doing the right thing. They know what to do, all of a sudden, and I love it. I’m in love with this team. I really am.”