Orioles continue to slide in wild-card race and sputter on offense in 3-2 loss to Cubs - BaltimoreBaseball.com 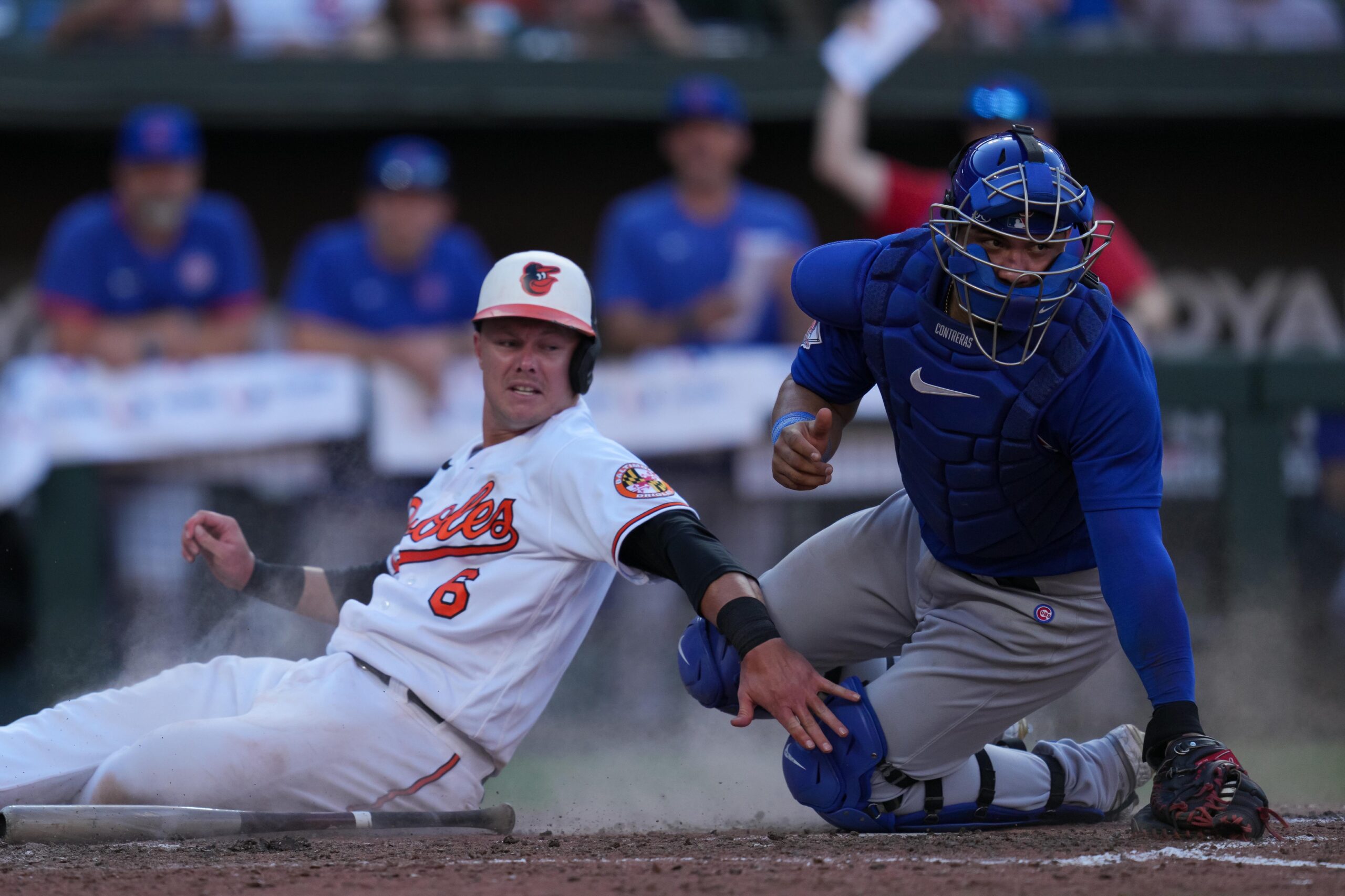 BALTIMORE—Three times in the last five games, the Orioles’ offense has been nonexistent. On Sunday, they didn’t get a baserunner for eight innings in a loss to Tampa Bay. In Wednesday’s loss at Toronto, they didn’t have a runner through six innings.

On Thursday, they had just one hit in the first four innings, and although they scored two runs in the eighth, it wasn’t enough in a 3-2 loss to the Chicago Cubs before an announced crowd of 19,454 at Oriole Park.

Their fifth loss in eight games drops them two games behind in the wild-card race. The Orioles are 61-57 and searching for an offense.

“We didn’t score today. We had a tough time offensively,” manager Brandon Hyde said, repeating words that have become too familiar. “It’s tough to win 2-1, 3-2 in this league, and we had some opportunities … We’re not stringing enough good at-bats together right now to give ourselves a chance.”

The Orioles’ only hit in the first four innings was a two-out triple by Cedric Mullins in the fourth.

In the fifth, Austin Hays doubled with one out and moved to third on an infield single by Rougned Odor. Jorge Mateo bunted and, with Hays charging for the plate, Cubs starter Adrian Sampson fielded the ball and made an outstanding flip throw to catcher Willson Contreras, who tagged Hays out.

“I think both teams struggled offensively early,” first baseman Ryan Mountcastle said. “It was tough, super tough backdrop. Guys were having trouble picking up spin. Once that settled down, guys were putting together better at-bats.”

Contreras hit his 17th home run with one out in the sixth against Oriole starter Spenser Watkins, who was relieved by Joey Krehbiel.

“You want to go out and give the team the best chance and hand it over to the bullpen that’s done a great job the whole year, and these bats are never out of a game,” Watkins said. “Today is just one of those days. It happens. I’ll trust my bullpen over anybody else, and I trust my bats over anybody else.”

“It’s easier to pitch when you have some breathing room, and we’re not having a ton of breathing room right now,” Hyde said. “We haven’t gotten it going offensively.”

Watkins and his teammates are playing meaningful games in late August, and he can sense the difference.

“There’s definitely a lot more emotion involved,” Watkins said. “You always feel the intensity of the game, especially when they’re close, especially when we’re fighting for a wild-card spot. As competitors, we’ve done this for our whole lives. You feel the energy. This group especially does a great job of corralling it and putting it into our play.”

In the bottom of the sixth, Mountcastle walked with one out, and Ramón Urias singled with two outs. Sampson was replaced by Sean Newcomb, who struck out pinch-hitter Ryan McKenna. Sampson (1-3) allowed four hits in 5 2/3 innings.

Rafael Ortega hit a pinch-hit home run to lead off the eighth for the Cubs. Two batters later, Contreras hit his second of the game, both against Krehbiel, for a 3-0 Cubs (50-67) lead.

The Orioles finally scored in the bottom of the eighth when Mullins and Adley Rutschman walked against Newcomb, who was replaced by Erich Uelman.

A single by Mountcastle scored Mullins, and Rutschman took third on an error by Velázquez in right field. Rutschman scored on a sacrifice fly by Anthony Santander. Ramón Urías grounded to third, and Mountcastle broke for home on contact. Third baseman Zach McKinstry threw home, and Mountcastle was tagged out. McKenna struck out to end the inning.

Hays reached on an error by McKinstry to begin the ninth against Brandon Hughes. Tyler Nevin was on deck to hit for Odor, but Hyde ran out of the dugout to call him back, and Odor batted for himself. He tried to sacrifice and hit a foul popup to first. Mateo singled, and Mullins lined softly to second, and shortstop Nico Hoerner doubled up Hays to end the game. Hughes earned his first career save.

After the Orioles traded veteran Trey Mancini to the Astros, the Orioles were hoping players such as Hays and Mountcastle would step up offensively, but Hays was 0-for-17 when he doubled in the fifth and is hitting .253, and Mountcastle is down to .248 after being at .280 on July 10th.

“I have no clue,” Mountcastle said about the team’s offensive struggles. “We have a big homestand here against Boston. Hopefully, we can put together better at-bats early in the game and get out to more of a lead.”

“I think we’ve just got to stay with it,” he said. “You’ve just got to grind it out. There’s nothing you can do. Keep putting the work in and, hopefully, we get out of it pretty quick.”

On Friday, the Orioles begin a three-game series against the Boston Red Sox, and Hyde is hoping his offense shows up.

“Tough time scoring runs the first two-thirds of the game,” Hyde said. “Give Sampson credit. He threw the ball well. We just didn’t take too many good at-bats into the eighth inning. I thought Watkins was really good. He gave up just that solo home run to Contreras. We had a rally there in the eighth, and runners on base there in the ninth. Just couldn’t get it done.”

Notes: DL Hall threw two innings in relief, allowing a run on a hit, walking three and striking out four as Triple-A Norfolk lost to Durham, 10-4. Denyi Reyes (0-4) allowed five runs on eight hits in 3 2/3 innings. Catcher Josh Nottingham hit his 12th home run. … Jordan Lyles (9-9, 4.48) will face Kutter Crawford (3-4, 4.18) on Friday night. Fireworks will follow the game. Saturday’s game begins at 4:05 pm and is Boog Powell Bobblehead Day. The first 20,000 fans 15-and-over will receive a bobblehead. Sunday, the Orioles and Red Sox play in the Little League Classic in Williamsport, Pennsylvania. The game begins at 7 p.m. and will be on ESPN.