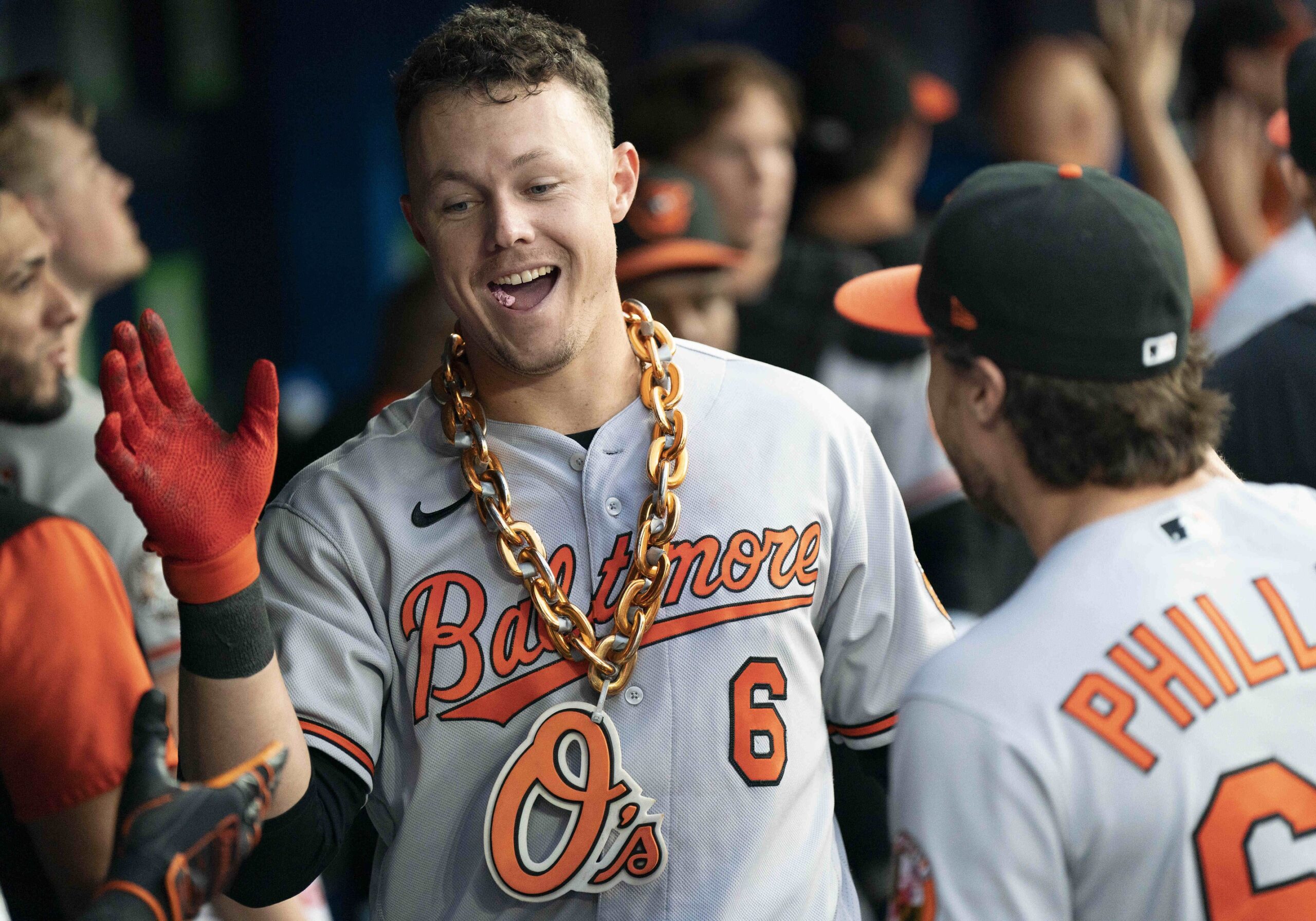 After two straight losses to the Tampa Bay Rays over the weekend, the Orioles faced another team they’re chasing in the wild-card race, the Toronto Blue Jays, and came away with a win on Monday night.

It was the fourth straight win for the Orioles over the Blue Jays. They won two games last week at Oriole Park and the final game of a four-game series in Toronto in June. The Orioles are 5-2 against Toronto with 12 more games left to play against them.

Ryan Mountcastle hit a two-run homer, his 16th. Mountcastle has 14 home runs against the Blue Jays in 32 games.

Dillon Tate allowed one hit in 1 2/3 innings. Cionel Pérez registered the final out of the eighth, and Félix Bautista worked the ninth, allowing a hit and a walk.

Ryan McKenna, leading off and starting in center field, had his first three-hit game as a major leaguer. McKenna led off with a bloop double against Yusei Kukuchi (4-9) and scored on a single by Anthony Santander.

“We had a tough series in Tampa,” manager Brandon Hyde told reporters in Toronto. “It was a tough last two games there, and there’s a lot of disappointment, and for us to score right away in the first inning, for me, that was big.”

After Mountcastle, who missed Sunday’s game because of a sore left hand, blasted his two-run home run in the top of the third, Toronto scored two runs against Bradish in the bottom of the inning on a two-run single by Lourdes Gurriel Jr. Bradish got Bo Bichette to hit into a double play to strand the tying run at third.

“That could have unraveled quickly,” Hyde said. “Great job staying with it, keeping his poise and keeping the lead for us at that point.”

The Orioles took a 6-2 lead in the fourth. Jorge Mateo reached on an error by shortstop Bichette. Terrin Vavra drew a nine-pitch walk, which Hyde considered one of the keys of the game. Mateo moved to third on an errant pickoff throw by Kikuchi and easily beat a throw home on a Tyler Nevin grounder to Bichette.

“We’re an athletic team,” Hyde said when asked about the team’s speed. “Really happy with how we played tonight.”

Mountcastle scored on a sacrifice fly by Vavra in the fifth for a 7-2 lead.

Guerrero  hit his 24th home run against Bradish in the fifth. After he allowed singles to Bichette and Gurriel, Bradish was removed for Baker, who retired Matt Chapman on a popup to Mateo at short.

Notes: Double-A Bowie infielder Joey Ortiz and right-handed pitcher Garrett Stallings were named the Orioles Minor League Player and Pitcher of the Month for July. … Right-handed pitchers Drew Rom and Ryan Watson were promoted from Bowie to Triple-A Norfolk. Right-handers Chayce McDermott and Cade Povich were promoted to Bowie from High-A Aberdeen. McDermott was obtained from Houston in the trade for first baseman/designated hitter Trey Mancini. Povich came from Minnesota in the trade that sent closer Jorge López to the Twins. … Dean Kremer (4-4, 3.89) will face Alek Manoah (12-5, 2.56) on Tuesday night.

Call for Questions: I’ll be answering Orioles questions this week. Please email them to: [email protected]