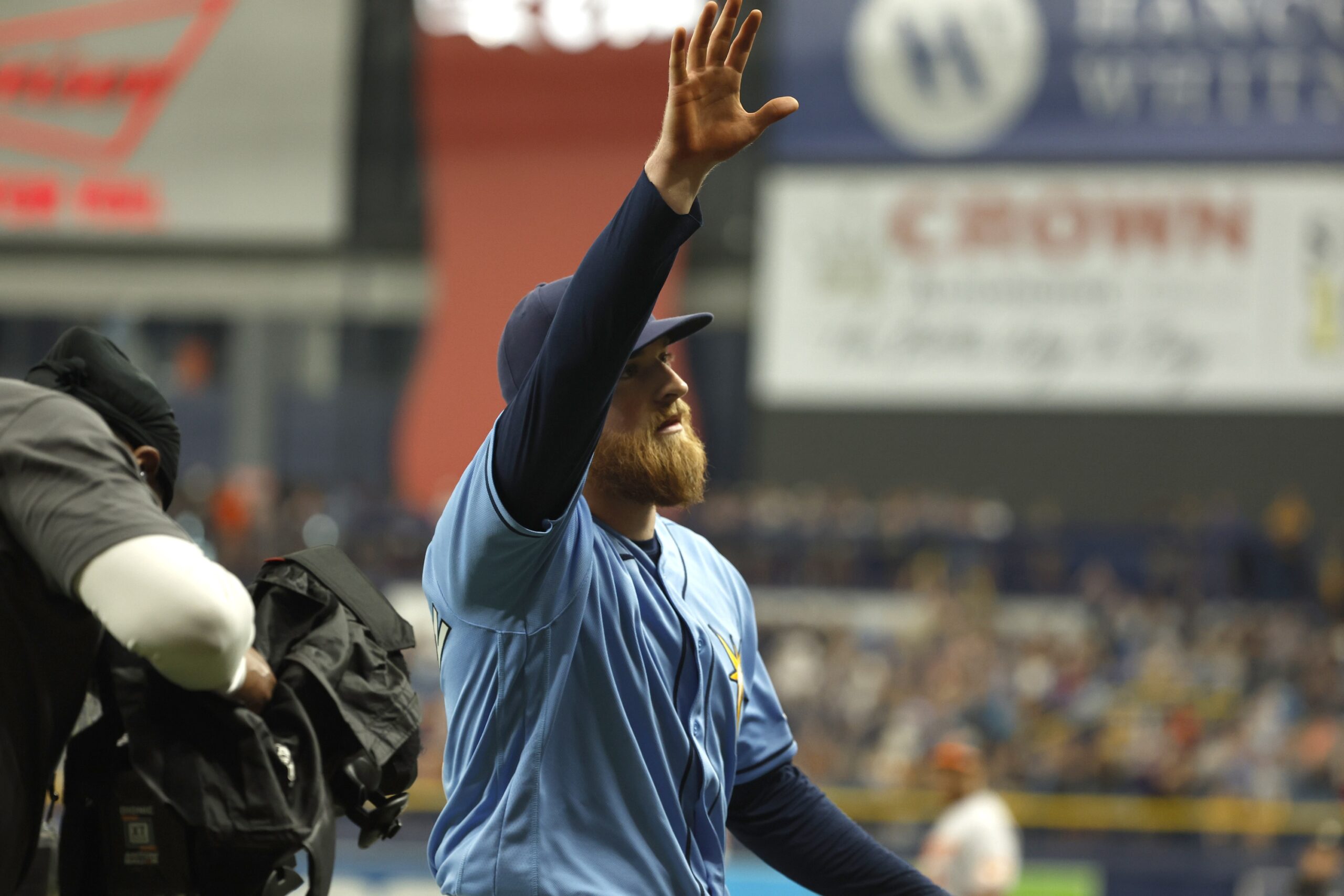 ST. PETERSBURG, Florida—In the middle of a push for their first postseason berth in six years, the Orioles were totally thwarted by Tampa Bay’s Drew Rasmussen on Sunday. The 27-year-old right-hander retired the first 24 Orioles, and it wasn’t until Jorge Mateo doubled on the first pitch of the ninth inning that they finally had a baserunner

Mateo scored, but his was the only hit in a 4-1 loss to the Rays before an announced crowd of 18,093 at Tropicana Field on Sunday.

Rasmussen (7-4) had never thrown more than seven innings in the major leagues, but when he retired Ramón Urias, Rougned Odor and Austin Hays in the eighth, he was three outs away from the first perfect game in just under 10 years.

Mateo lined Rasmussen’s pitch to left field, moved to third on an infield out by Terrin Vavra and scored on a wild pitch after Brett Phillips struck out. In his first two at-bats against Rasmussen, Mateo fouled to first and filed to right.

“It was definitely a relief,” Mateo said through a translator. “No team ever wants to have that on them, to be a team that got a perfect game thrown against them. It was definitely nice to get that hit in the last inning.”

Jason Adam stuck out Cedric Mullins and Adley Rutschman to end the game.

“I’ll take it,” Rasmussen said. “It helps our team’s chance of winning. When our team has a chance to win a game, that’s first and foremost, the most important thing.”

The Orioles have been no-hit seven times, but they’ve never failed to get a baserunner. On July 14th, 2019, Tampa Bay’s Ryne Stanek and Ryan Yarbrough combined for eight perfect innings against the Orioles in another 4-1 loss.

The Orioles haven’t been no-hit since Seattle’s Hisashi Iwakuma threw one on August 12th, 2015.

The loss puts Orioles 1 ½ games behind the Rays for the final wild-card spot and secured the season series for Tampa Bay (60-53). The Orioles head to Toronto for three games beginning Monday night. The Blue Jays and Orioles have 13 games remaining, and Toronto leads Baltimore by 2 ½ games in the wild-card race.

“I thought our guys stayed positive,” manager Brandon Hyde said. “We’ve got to turn the page on this one and we’re going to face a really good Toronto team here tomorrow. It’s a disappointing way to end this series, but we have to move on.”

“It’s difficult to lose two games to these guys,” Mateo said. “The mentality doesn’t change. We have to continue to play hard and go out there and compete again. They played really good baseball this weekend and we did all we could.”

Phillips made the last out of the sixth inning when he grounded up the middle and shortstop Taylor Walls fielded it and his throw to first beat Phillips to first by two steps. In the seventh, Mullins and Rutschman grounded to second, and Anthony Santander flied to center.

“We had a tough time squaring him up,” Hyde said. “A lot of early count, weak outs, which helped him out. He threw a heck of a game.”

Oriole starter Jordan Lyles struck out five batters in the first two innings. In the third, Jose Siri led off with a single and advanced to third on a double by Walls. Ji-Man Choi was caught looking, and Randy Arozarena hit his 15th home run.

“It wasn’t a good pitch,” Lyles said. “It didn’t sink. It didn’t run … That was the game right there, that three-run shot.”

In 37 games against the Orioles, Arozarena has 15 home runs and 38 RBIs.

“You had David Peralta on deck, Jordan Lyles with an 0-1 count there. He threw a sinker, foul back, went back to the sinker,” Hyde said. “Arozarena has our number for whatever reason. In those situations, we have to do a lot better job of just pitching and follow the game plan. That was a big hit and, unfortunately, we didn’t score, either.”

Lyles (9-9) allowed four runs on five hits in 4 1/3 innings. It was his second shortest start of the season. The shortest, 2 2/3 innings, came on July 17th against the Rays at Tropicana Field, the day before the All-Star break. He struck out a season-high nine.

“It was quick innings. I barely had time to sit down,” Lyles said of Rasmussen’s performance. “I wasn’t able to watch too much. If I didn’t start today, I would be able to take it in more. I’m game planning in between innings. There just wasn’t a lot of game planning because they were so quick. Outings like that are special. You need to have some luck on your side. You need to have your better stuff.”

Tampa Bay scored their fourth run on a single by Peralta in the fifth.

“We’re disappointed in today’s game,” Hyde said. “We faced a guy that threw well against us and we scored one run on a wild pitch, and that was it. We have a lot of games and a lot of season left.”

Before the game, Hyde acknowledged that even though the season has been a successful one for the Orioles, missing out on the postseason would be a disappointment.

“I think we’ve fought for 4 1/2 months,” he said. “We’ve put ourselves in position. I’m proud of our guys for what they’ve been able to do so far. It’s a tough schedule the rest of the way. The guys are going to try to win every night. We have as good a chance as anybody.”

Notes: The Orioles recalled right-hander Logan Gillaspie from Triple-A Norfolk to replace DL Hall, who was optioned to the Tides after Saturday’s start against the Rays. Gillaspie recorded two outs in the eighth. … When the Orioles went to Toronto in June, reliever Keegan Akin and outfielder Anthony Santander were placed on the restricted list because they were not vaccinated for Covid 19. The entire team is now vaccinated. … Kyle Bradish (1-4, 6.42) will face Yusei Kikuchi (4-6, 5.13) on Monday night.

Mountcastle sits: Ryan Mountcastle was out of the lineup after he was hit by a pitch in the ninth inning of Saturday’s game. Mountcastle’s hand was sore and swollen, he said.

“I don’t think it’s an IL [injured list] situation,” Hyde said. “It’s more of a day-to-day. Hopefully, he feels better as the day goes on today.”

Mountcastle was most annoyed because the injury occurred in the ninth inning of a game the Orioles trailed by six runs, and with two outs. The pitcher who hit him was a former Oriole, Jimmy Yacabonis.

“I almost charged with mound on him,” Mountcastle joked. “There was some scuffling going on last game. It was probably intentional so I’ll have to give him a talking to.”

Wells improving: Tyler Wells, who’s on the 15-day injured list because of left side discomfort, threw on the field before Saturday’s game.

“The first day of throwing yesterday, went well, feels good and now it’s going to be a ramp up from an oblique strain,” Hyde said. “Takes a little bit of time. Went in the right direction yesterday. Hopefully, there won’t be any setbacks.”

Wells doesn’t want to guess on whether he’ll be able to pitch again this season.

“I can’t answer that,” he said. “Because it’s not up to me. As long as I feel good. It’s a day-to-day basis. That’s completely up to them and how I’m feeling and what their expertise is.”

Hall’s outing: Hall was still in the Orioles’ clubhouse before the game and threw lightly on the field.

“Debuts are hard and tough,” Hyde said. “Great to see him get this experience. I don’t think the results were exactly what he wanted, but there were a lot of nerves yesterday and some anxious moments … I think it’s only going to benefit him going forward. You don’t know what it’s like until you get here, and to be thrown in this type of environment … I thought he handled everything before the game, after the game, very, very well. A learning experience for him.”

Elias on playoffs, Henderson, future: Executive vice president/general manager Mike Elias said on MLB Network Radio that he thinks the Orioles will make it to the postseason.

“I think we’re going to get into the playoffs,” he said. “I like where this is going. I think this team has staying power for the next month-and-a-half. We have a really tough schedule.”

Elias said that Baseball America’s top prospect, infielder Gunnar Henderson, who’s at Norfolk, could be added to the Orioles.

“It’s definitely on the table, and we’re watching him carefully and seeing how he might fit in,” he said.

“Our plan for this offseason has always been to significantly escalate the payroll,” he said. We plan to explore free agency much more aggressively … The success in the first half this team has had has only cemented those plans.”

Call for questions: I’ll be answering Orioles’ questions this week. Please email them to: [email protected].