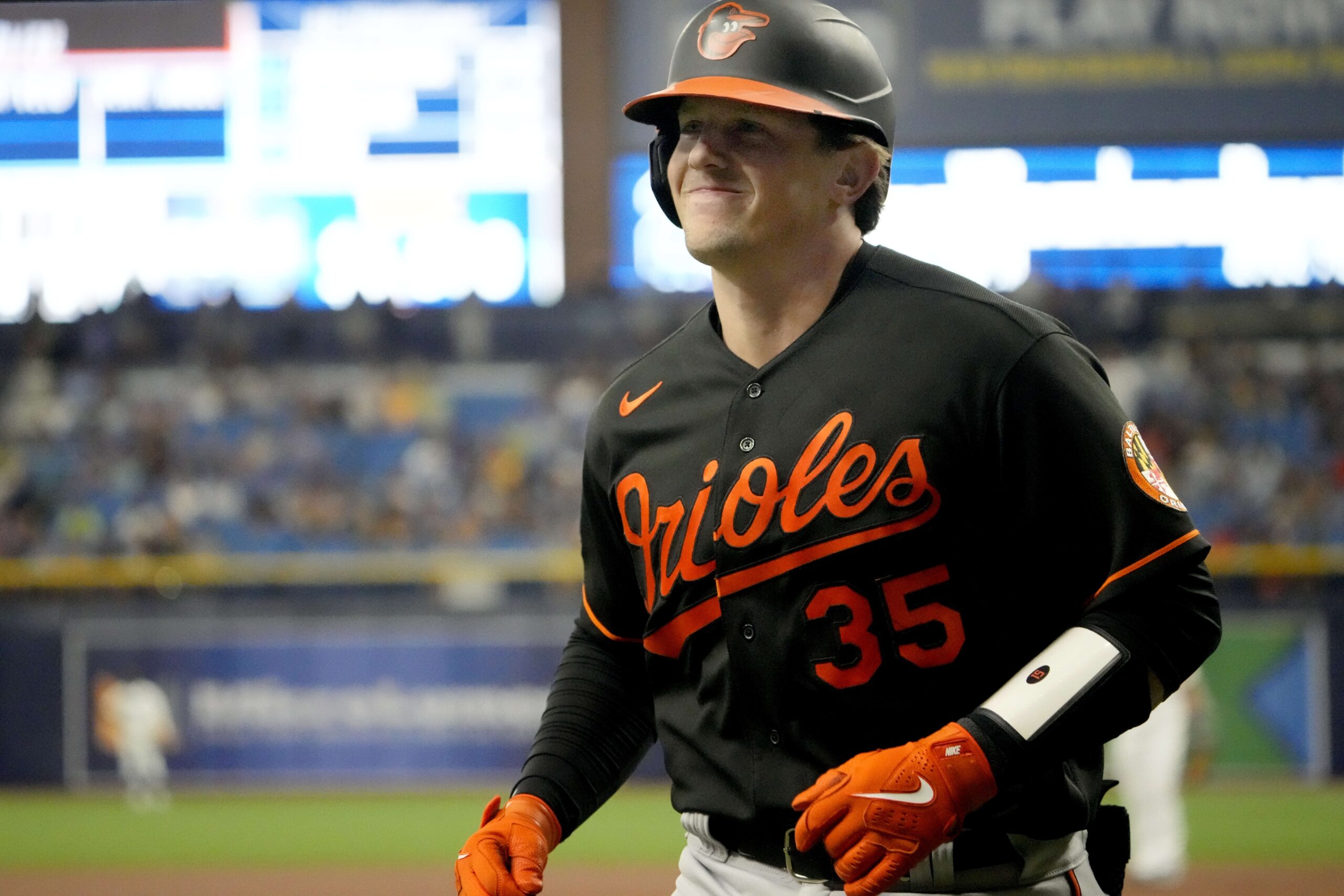 ST. PETERSBURG, Florida—A year ago, the Tampa Bay Rays toyed with the Orioles, winning 18 of 19 games. It seemed the Orioles were miles away from being in the Rays’ class.

Suddenly, things have changed and, with 50 games left in their stunning turnaround season, the Orioles passed the Rays for the third wild-card spot with a 10-3 win before an announced crowd of 12,380 at Tropicana Field on Friday night.

In 2021, Tampa Bay outscored the Orioles, 151-70. Now, it’s the Orioles who are winning lopsided games and are 9-8 against the Rays this season.

On Saturday, the Orioles will start their No. 2 pitching prospect, left-hander DL Hall, who was promoted from Triple-A Norfolk.

In the second, shortstop Jorge Mateo dumped a double into shallow right field that scored second baseman Rougned Odor with the second Orioles’ run. Mateo had a career-high five hits; Odor had four.

“I’m very satisfied with that performance,” Mateo said through a translator. “It says that my hard work is paying off. To go out there and do that, I feel really good about it. I want to come back tomorrow and do it all over again.” Among his hard work, Mateo said, is shortening his swing so that it is quicker to the ball.

In the fifth, Mateo led off with a double and advanced to third on a bunt single by centerfielder Cedric Mullins, his seventh of the season. Rutschman followed with a sacrifice fly to right that scored Mateo.

The Orioles chased Kluber (7-7) in the sixth with a four-run inning in which their baserunners challenged the arms of the Rays’ outfielders. Odor had an RBI single, Ramón Urias delivered the Orioles’ second acrifice fly, and Mateo and Mullins had run-scoring singles to expand the Orioles’ lead to 7-0.

Odor added an RBI single in the eighth, and Mullins hit his 10th home run, which also reached the C-ring catwalk, in the eighth.

It was the fourth time in the 25-year-history of Tropicana Field that there were multiple C-ring homers in the same game.

Mateo’s fifth hit came against Chang, and he laughed when he described facing him.

“It was definitely a little weird and uncomfortable hitting off a position player,” Mateo said. “But I’m happy I got that fifth hit off of him.”

Oriole starter Austin Voth retired the first 10 Tampa Bay hitters before David Peralta walked with one out in the fourth. Christian Bethancourt reached on an error by Urías at third with two outs in the fifth.

Voth’s no-hit bid ended when Jose Siri led off the sixth with a single. Randy Arozarena homered, his 14th in 35 games against the Orioles.

“When my curveball’s on, I’m just going to keep throwing it until I get hit,” Voth said. “That’s what happened in the sixth inning. For five innings, it was great.”

Voth (3-1) left after 5 1/3 innings, his longest start with the Orioles. He allowed two runs on three hits.

“I feel like we’ve been hot for a while now,” Voth said. “We’ve caught fire and keeping with it. We lost [Thursday] but the mentality in the locker room, I feel like has stayed the same. It doesn’t feel like we’re cooling off … We’re rolling.”

Hall’s arrival: Rutschman has caught Hall at Norfolk and Bowie.

“It’s awesome. I’m just excited to see the look on his face when he’s experiencing everything for the first time,” Rutschman said. “Our group chat has been going off with him. It’s been fun.

Notes: Brett Phillips, who was traded by the Rays to the Orioles on August 2nd, brought the lineup card to home plate before the game. The Rays played a tribute video to Phillips before the third inning, which included his game-winning hit in Game 4 of the 2020 World Series. Phillips came out of the dugout and saluted the crowd. He came in the game in the sixth inning.. … Starter Tyler Wells, who was placed on the injured list because of lower left side discomfort, is with the club. Although he hasn’t begun throwing, he is improving, Hyde said. “He’s feeling a lot better, though … The rehab stuff is ramping up, which is a great sign. Hopefully, he’s back with us sooner rather than later.” … Mateo was the third player in Orioles history to have five hits as the No. 9 hitter, the first since Rich Dauer on June 2nd, 1980.

He also made a spectacular play on Brandon Lowe in the fourth when the Orioles were in the shift, putting Mateo on the right side of second. He ranged far to his left on a bouncer by Lowe, caught the ball and flipped it to first baseman Ryan Mountcastle in one motion for the out (Lowe was initially called safe). What made it even more impressive is that Mateo let the ball get past his body so that he had momentum on the flip. It preserved the no-hitter at the time.

Baumann (1-6) walked two and struck out two and left the game after throwing 32 pitches.

Jean Pinto allowed one hit in three innings and registered his second save.