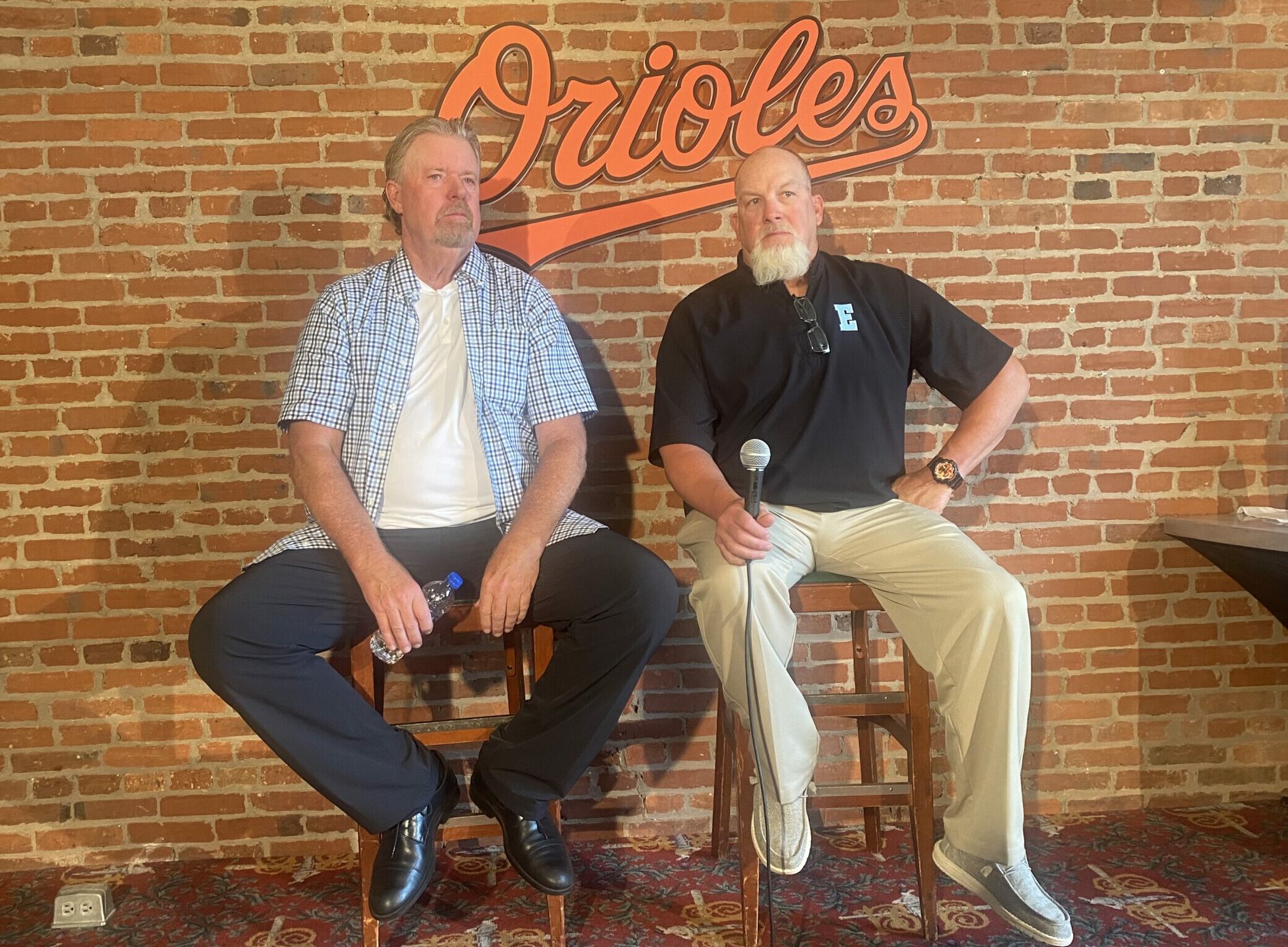 BALTIMORE—A number of the former Orioles who came back for this weekend’s celebration of the 30th anniversary of Oriole Park at Camden Yards don’t follow their old team closely, but they’re all glad to see the team is winning again.

“I’ve seen some news about those guys,” said Ubaldo Jimenez, who was the starting pitcher when the Orioles clinched their last American League East title on September 16th, 2014.

“They won like [10] straight games. It’s been fun. I’m really happy for the city. They deserve to have a team that they cheer on and they can expect to win. The young guys, they have a lot of energy and you can see that every night. They play hard. They don’t really care that they play in one of the toughest divisions. They go out there and they’re winning.”

Hall of Fame pitcher Mike Mussina doesn’t follow closely but knows that the Orioles are much better in 2022 than they have been in recent years.

“The team’s having a good year,” Mussina said. “If they finish out the year the way it’s going, whether they win or they don’t, it looks like they’re heading in the right direction.”

One former Oriole who follows the Orioles closely is Rick Sutcliffe, who started and won the first game in Camden Yards history on April 6th, 1992.

Sutcliffe, who is a broadcaster for the Chicago Cubs, says he watches three or four Oriole games a week with his 9-year-old grandson.

“Since he was 3, his favorite team has been the Orioles,” Sutcliffe said. “He’s always loved the color orange. He literally told me at the beginning of the season, in April: ‘Gramps, this team is a lot better than people think.’”

Sutcliffe watched the three games the Orioles played against the Cubs.

“If I could have one lineup in baseball right now,” he said, “I would take the Oriole lineup right now.”

Sutcliffe’s grandson’s favorite Oriole was Trey Mancini, who was traded last Monday to the Houston Astros.

“My grandson was crushed when they traded Mancini,” Sutcliffe said. “I’m a cancer survivor. I know that’s a big voice. I don’t know what kind of voice it was in the clubhouse. I know that there was leadership there that a lot of people went to. The young kid at third, [Ramón] Urías and [Tyler] Nevin, those guys need at-bats … I think they’re creating more at-bats to create an opportunity for this offense to get even better.”

Eddie Murray, 66, who hit his 500th home run in Camden Yards, is also a casual observer.

“Some guys worth looking at,” he said. “They really are playing and doing it in an exciting way.”

Murray’s 1979 “Orioles Magic” team had many exciting, unexpected wins and went to the World Series that year. He isn’t sure the teams compare.

“I haven’t seen quite enough of them to say that,” Murray said. “They have some guys here that you’ve seen take steps. They’re definitely getting better, and that’s what it takes, is to get better and for your teammates to know it, and they get to see you, how you work and go about doing your job. That’s what works, and then they put in their work. It’s a fine thing when  everybody’s pulling in the same direction.”

Jay Gibbons, a first baseman, outfielder and designated hitter, played for the Orioles from 2001-2007, when the team lost more than 90 games in five of the seven seasons. Gibbons was so eager to see the Orioles in the postseason that when the team played in the American League Division Series against the New York Yankees in 2012, he attended a game.

“It makes it a lot more fun to play when you’re winning, whether you win 10 in a row, eight in a row, and all of a sudden fans start to buzz around the city,” Gibbons said. “I think we’re starting to see it again now. I follow it a little bit back in Southern California, and my son reminds me, ‘Dad, they’re playing really well.’

“Sure enough, you’ve got this young talent that’s starting to come together. It’s going to happen again here. It’s just a matter of time. When it does, I think the fans will embrace it and the stands will be full again.”

Mike Devereaux, who made many acrobatic catches as a left and centerfielder in the early years of Camden Yards, came to the Orioles in the 1989 season, a year after the Orioles lost their first 21 games and went on to lose 107. Devereaux’s first season was the “Why Not?” year when the team improved its win total by 33 games, winning 87 and making a playoff run.

“Anything can happen,” he said. “It’s really tough for me to hear things like ‘a rebuilding year’ because ’89, I guess was [supposed to be] our rebuilding year, and it depends on the camaraderie of the team, the management and how the team comes together to form a winning franchise or a winning season — and I think it’s very possible with this organization. There’s confidence in this team. It’s great to see the fact that these guys are winning. It’s been a while.”

Devereaux is eager to return as a fan.

“Once it does happen, and it will, and sooner rather than later, it’s going to be crazy. It is,” he said. “The fans in Baltimore when I played here were incredible, best fans I ever played in front of, and they deserve to have a playoff and a World Series here. If it happens, I’m going to be here.”