Orioles' offense sputters again in 3-2 loss to Reds; Club slips back to .500 - BaltimoreBaseball.com 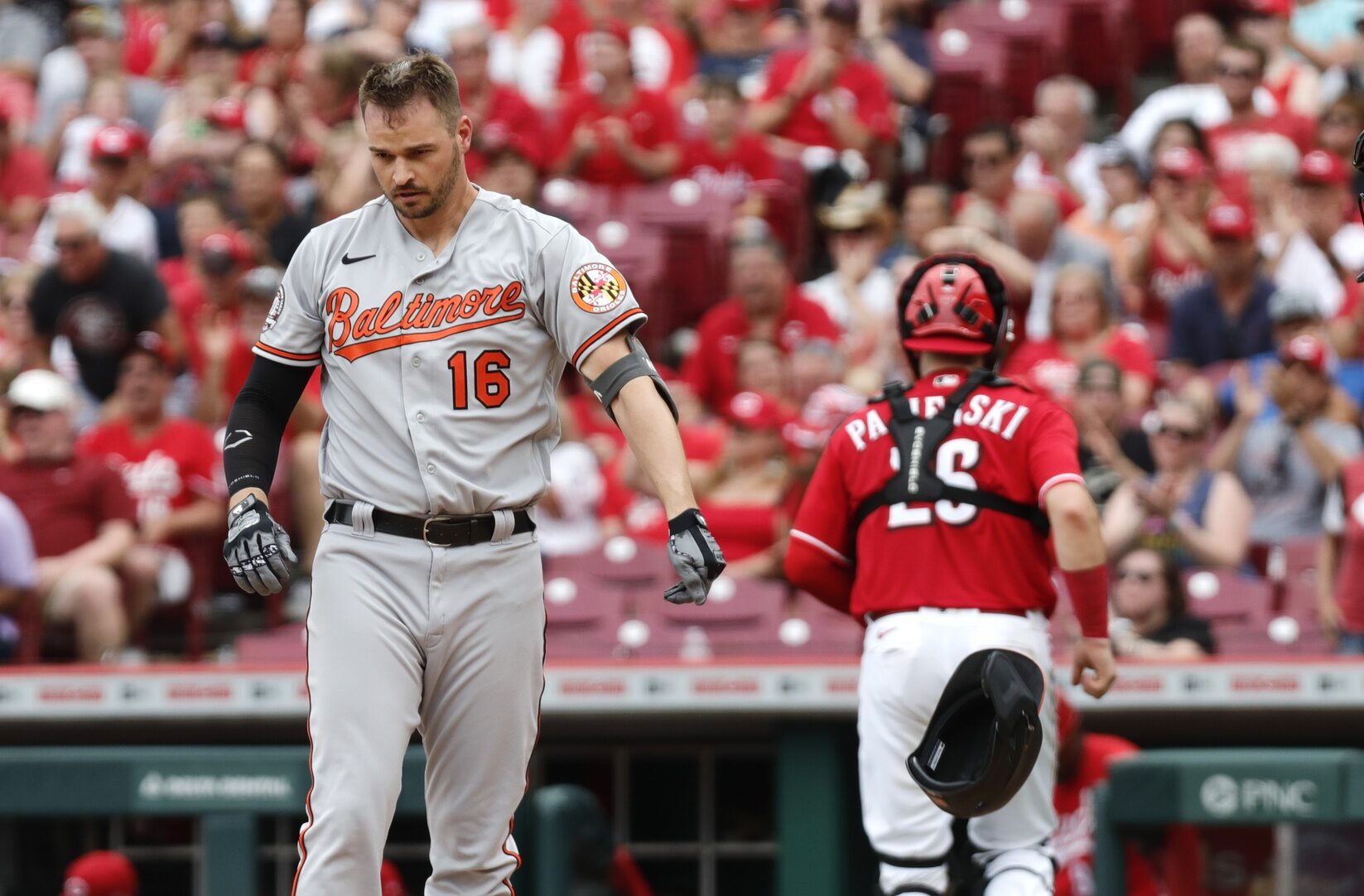 Manager Brandon Hyde joked before Sunday’s game that Trey Mancini didn’t have the green light to try to steal a base even though he was batting leadoff for the first time since 2018. The move seemed to make sense because Mancini leads the team with a .351 on-base percentage and is second with a .761 OPS.

However, Hyde wasn’t in a joking mood after the Orioles lost, 3-2, to the Reds, dropping two of three and sliding back to .500. They were 0-for-6 with runners in scoring position, 3-for-21 for the series, and left Hyde frustrated.

By batting Mancini first, Adley Rutschman second and Anthony Santander third, Hyde was hoping to put some life into the offense. The experiment didn’t work as planned as Félix Bautista allowed a go-ahead home run to Brandon Drury in the bottom of the eighth to drop the Orioles back to .500 at 51-51.

Hyde was asked about the bullpen giving up three runs after starter Austin Voth shut out the Reds through five innings. He pointed out that there is no margin for error because the offense has been so ineffective.

“We’re not scoring,” Hyde told reporters in Cincinnati. “You have to be able to score and to be able to get a lead and add on. We’re just not doing enough offensively honestly to help out our pitching. We have to do a better job to push some runs across and get better at-bats.”

Santander tied the game, 2-2, with a solo home run in the eighth inning off Reds reliever Alexis Díaz, who still got the win and improved to 3-1. Santander had three hits, including his team-leading 19th homer, and extended his hitting streak to a season-high 11 games. He went 7-for-12 in the three-game series with two homers and four RBIs.

Bautista (3-3) got the first two outs in the bottom of the eighth before he hung an 88-mile-per-hour splitter that Drury hammered over the left-field fence. Drury leads the Reds in runs, hits, total bases, doubles, home runs, RBIs, and slugging.

Buck Farmer walked Terrin Vavra with two outs in the ninth before getting Mancini on a sharp grounder for his first career save.

Voth had one of his best outings for the Orioles since being claimed off waivers from the Nationals on June 7th. Voth threw five scoreless innings, allowing four hits and striking out six.

“I love starting,” Voth told reporters. “Just pitching every five days and having your own routine and building up for that start and being able to pitch multiple innings, I love it.”

The Orioles were stellar again defensively, and Ramón Urías made a diving stop on a sharp grounder by Michael Papierski to help Voth get out of the fifth unscathed.

Bryan Baker entered in the sixth and walked the first two batters before getting a popout by Tommy Pham.  Hyde replaced Baker with Cionel Pérez to face his former team and he allowed an RBI single to Joey Votto that gave the Reds a 1-0 lead.

Pérez then walked Drury, and Kyle Farmer followed with a sacrifice fly to boost the lead to 2-0.

The Orioles could not generate any offense against Reds left-hander Nick Lodolo, who is rated the team’s second-best prospect by Baseball America behind infielder Elly De La Cruz.

The Orioles managed to get a couple of baserunners against Lodolo in the fourth on a Santander single and a walk by Austin Hays. However, Lodolo got out of the jam by getting Urías and Ryan Mountcastle to fly out.

Lodolo walked Mountcastle to lead off the seventh on his 98th pitch and the Reds went to their bullpen, which ranks last in baseball with a 5.21 ERA.

“We didn’t do a whole lot offensively until he was out of the game,” Hyde told reporters. “He has a really good arm and he’s a good-looking, young starting pitcher.”

Joel Kuhnel allowed a single to Rougned Odor and a sacrifice fly to pinch-hitter Cedric Mullins that cut the lead to 2-1.

Lodolo, 24, allowed one run and four hits with seven strikeouts and two walks in 6 innings.

Mancini went 0 for 5 with two strikeouts.