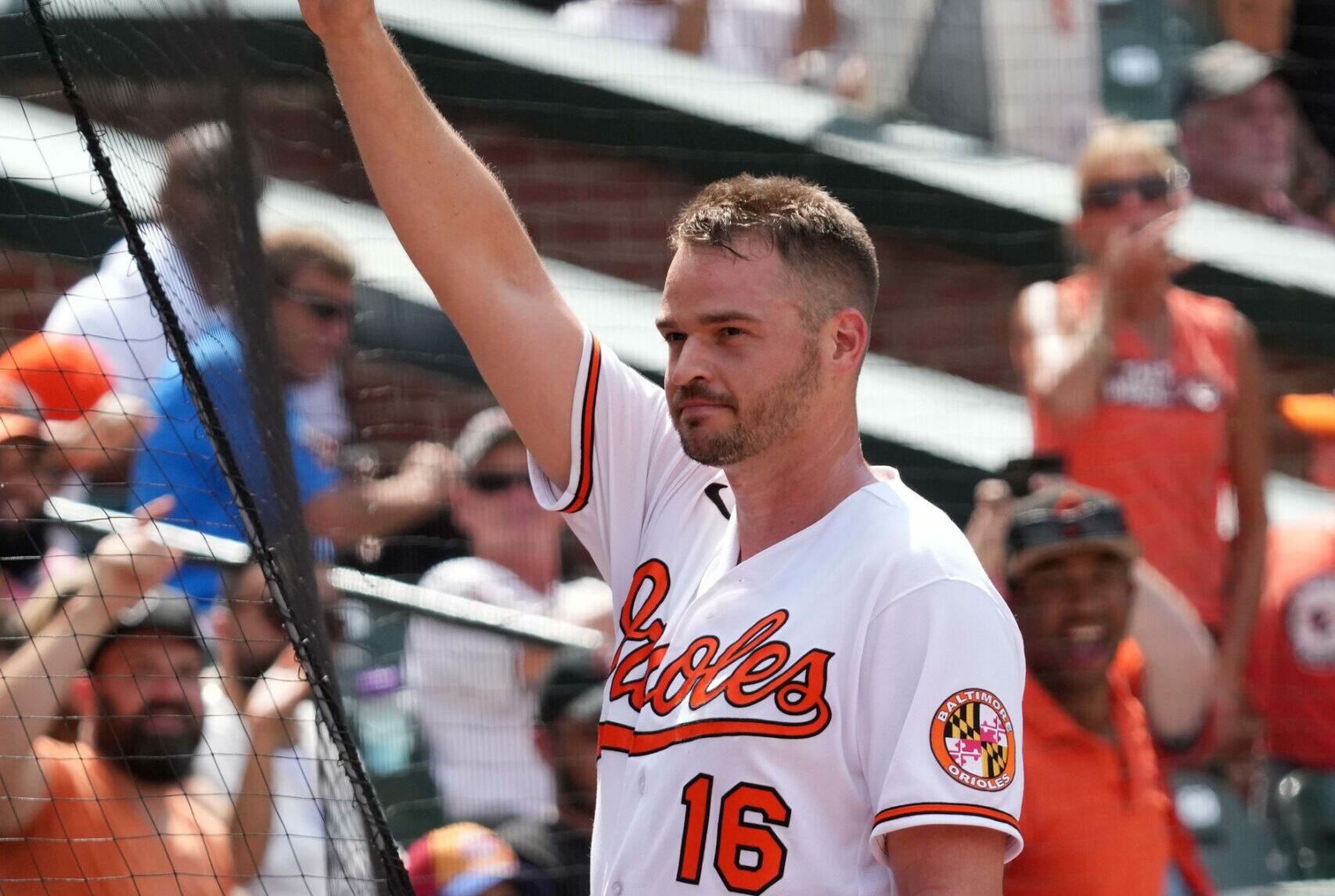 The Orioles honored Gaba, who was elected to the team’s Hall of Fame hours before his death, and Mancini honored the 16,784 at Camden Yards who turned out on a steamy day with the most unlikely home run of his career in the Orioles’ 3-0 win over the Tampa Bay Rays.

In Mancini’s first game for the Orioles, on September 20th, 2016, he homered. In what could be his last home game for them, he hit a two-run inside-the-park home run.

The Orioles were clinging to a 1-0 lead against the Rays in the eighth inning. With one out, Austin Hays doubled. Mancini hit a fly ball to right field. Josh Lowe couldn’t see it, and it glanced off the left side of his face, causing a slight bruise, and the ball squirted away.

Hays began waving Mancini on, and Mancini kept running until he slid home with what was scored an inside-the-park home run.

Before the home run, Mancini had gone 1-for-3 as the designated hitter. At each plate appearance, Mancini was greeted enthusiastically.

As he stepped to the plate before his fourth at-bat, the fans realized this could be his final one in Baltimore before the August 2nd trade deadline. They cheered him and kept on cheering as he circled the bases.

“I had some help from somebody,” Mancini said. “That was absolutely insane. I’d like to thank Mo for a hand in it. I know he was up there smiling and laughing at me running around the bases. That was crazy. I’m kind of at a loss for words that that happened.”

After the home run, Mancini ducked inside the runway, putting away equipment, and third baseman Tyler Nevin chased him down, telling him fans were calling for a curtain call.

Mancini ran out in front of the dugout, waving and thanking the fans, who don’t want him to leave.

“Of course, I wanted to go out and acknowledge them. It meant a lot,” Mancini said. “I have no idea what the next few days will bring, but I wanted to make sure to soak in every moment today just in case this was it.

“It was incredible. I’ve always felt the love from the fans from Day One.”

Manager Brandon Hyde was hoping for a special moment, too.

“I think everybody in the park was hoping for a feel-good there at the end,” he said.

Mancini’s second at-bat was a strikeout that sandwiched the Orioles’ first run when Hays was hit by a pitch, stole second and scored on a double by Anthony Santander.

Rays starter Ryan Yarbrough (0-6) gave up just that one run on four hits in six innings.

Jordan Lyles (7-8) gave up three hits in 5 2/3 innings. The bullpen group of Cionel Pérez, Bryan Baker and Félix Bautista allowed just one hit in 3 1/3 innings. Bautista retired all four batters he faced, striking out three, for his third save, preserving the Orioles’ ninth shutout.

The Orioles (50-49) took three of four from Tampa Bay (53-46), but executive vice president/general manager could still trade Mancini, Lyles and possibly others.

“Playing against him on the other side, I know what’s he meant to this team, this organization, this city,” Lyles said. “If this is the last time, no one else deserves it more than him. Great person, great teammate. Baltimore, they have been very lucky to have him.”

Lyles has been credited with mentoring the Orioles’ young staff. He has an $11 million option for next season, and he could be valuable to other contenders as a starter. Like Mancini, he’d like to stay.

“A hundred percent,” Lyles said. “My thoughts would have probably been a little bit different in spring training or this offseason knowing where we ended up last season as an organization.

“I would love to be here. I’ve enjoyed my time … There’s a lot of things to enjoy … I’ve enjoyed the atmosphere that these last two months have brought for me personally and the team, these guys in the clubhouse.”

Hyde said it has been an honor to manage Mancini and knows anything can happen between now and next Tuesday at 6 p.m.

“We’ll see what happens,” Hyde said. “I don’t think anybody knows. Trey appreciated it. What a way to go out, if he is going out.

Notes: Mancini’s inside-the-park home run was the first for the Orioles since Hays hit one on August 11th, 2020 at Philadelphia, and the first in Baltimore since Robert Andino’s on September 26th, 2011 against Boston. … The Orioles haven’t named a starter for Friday night’s game in Cincinnati. Mike Minor (1-7, 6.65) will start for the Reds. It’s the first time the Orioles will play Cincinnati since 2017. … Hays, Mancini and Santander each have been hit by nine pitches this season.