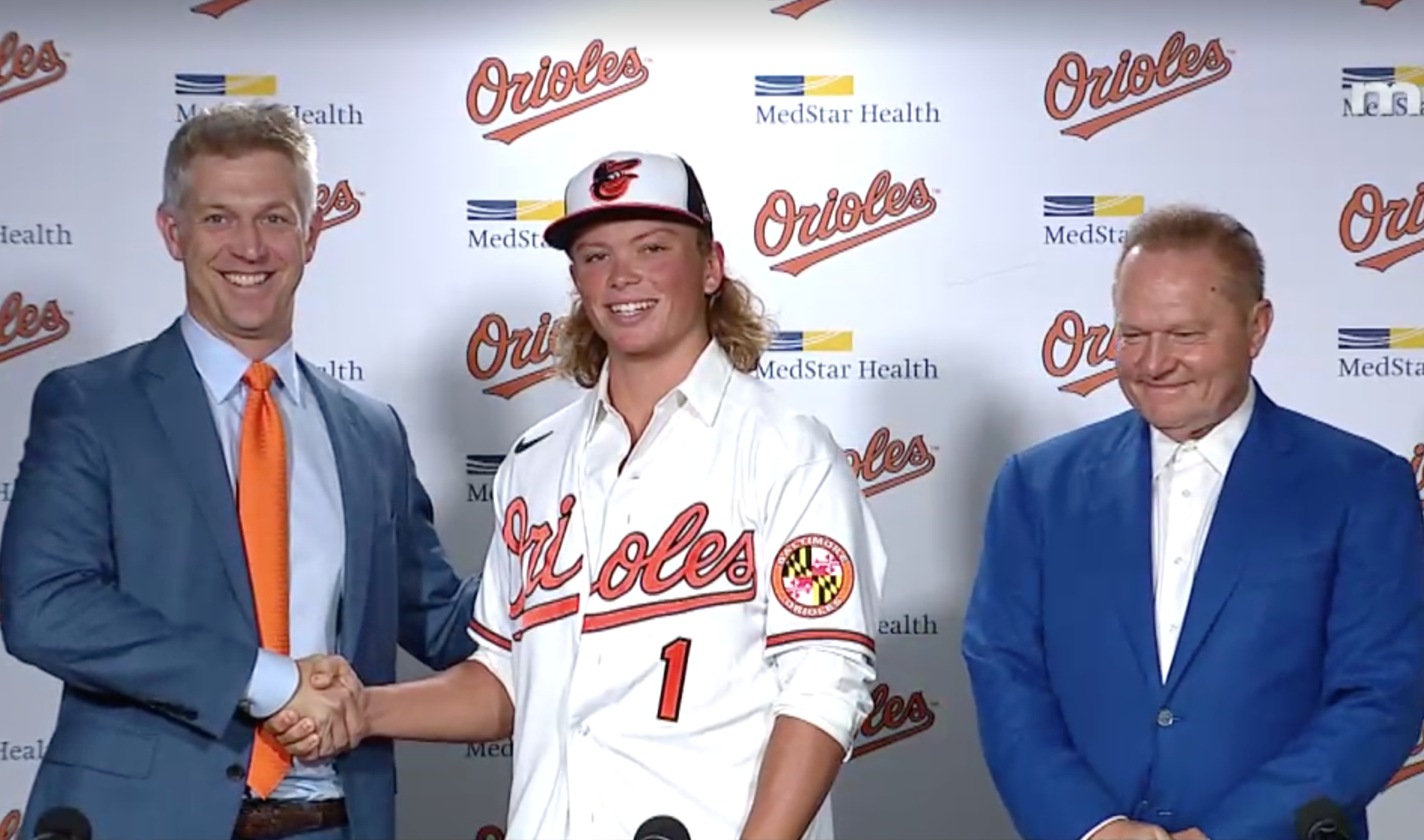 BALTIMORE—Jackson Holliday signed his $8.19 million contract with the Orioles, met the media and took batting practice with the team. The 18-year-old left-handed hitting shortstop from Stillwater, Oklahoma was the overall number one pick in the draft, and now his professional journey begins.

Holliday will report to Sarasota, Florida on Thursday and play in the Florida Complex League.

“I’m very, very excited to start playing,” Holliday said. “It’s been a little bit since I’ve been able to compete on the baseball field so I’m very excited to get going and get down there to Florida and start competing.”

Elias said in 2019, when the Orioles drafted catcher Adley Rutschman with the overall top pick, and that with pandemic, the team wasn’t been able to introduce its 2020 and 2021 top picks, outfielders Heston Kjerstad and Colton Cowser in person.

“It felt like we were just kind of starting something,” Elias said of Rutschman.

“He was a big piece of a big project we were trying to build, and I look now, and this has a totally different feeling to me, adding Jackson’s talent right now. Our organization, I think, is in the healthiest spot it’s been in a very long time.

“We’ve got a major league team to their credit that’s up here playing a really exciting brand of baseball, playing really well. They’re young , they’re talented. So many of them are going to be here for a while. We’re sitting on the number one farm system in the game, and now we have somebody that I expect is going to one day develop into one of the very best players in the game.”

Holliday has noticed the improvements the Orioles have made and is eager to begin his professional career.

“It’s awesome to be able to get into an organization that’s heading in such a great direction,” he said. “I hope that I can get here fast and contribute in a good way. I’m very excited to get in and start playing and get to meet all these guys.”

The 18-year-old has set an ambitious timeline.

“I want to be up here as fast as possible,” Holliday said. “I would love to come out hot and continue to play well so hopefully two years or less would be my goal. I know it’s a big goal, but I think I can do it.”

“This was a very thorough and very difficult decision at the top of the draft,” Elias said. “It always is. This group in particular was a tremendous group that we were choosing from, and so many good choices, and I think for him to have emerged from a group of players as talented as the ones we were looking at speaks a lot to the type of player we think he is.”

Holliday batted .685 with 17 home runs and 79 RBIs in 40 games for Stillwater High School this season. The son of longtime major league slugger Matt Holliday, he thinks he knows what it takes to be a big leaguer.

“It comes with some pressure,” Holliday said of being the top pick. “Hopefully, I’ve got a good foundation in my family and I’m going to handle it like I have everything, play hard and work hard and try to be the best player I can be.”

“It’s a rare library that the Holliday library gives Jackson, and I can tell you he’s read all the books,” Boras said.

Matt Holliday and his family, who attended the news conference, has been closely involved with his son’s career.

“He’s going to [Sarasota] tomorrow and we’re going to go back to Oklahoma,” Matt Holliday said. “He’s ready to go out on his own. I love to watch him play, and I’d like to watch him play as much as possible. I’m obviously a phone call away from anything he would need as a kid going away from home. He’s a mature kid.”

Ken Guthrie, the Orioles’ scout who scouted both Kjerstad in 2020, the overall No. 2 pick, and Holliday this year said he was surprised by Holliday’s rapid growth over the last year.

“I didn’t expect to be sitting in the draft room this time last summer,” Guthrie said. “We all saw it coming. It came quicker than most expected. He hit the nail on the head. He put in a lot of work. Physically he just got bigger and allowed all his tools to rapidly excel.” Holliday is 6 feet 1, 175 pounds.

A longtime evaluator, Guthrie thinks he was worthy of the top pick.

“What put Jackson at the top of my list per se was again the tools speak for themselves,” he said. “It’s not the easiest part, but it’s clear when you see it because you’ve done it for so long.

“From a scouting perspective, you watch the very small things happen, not only between the lines, but outside the lines and again I didn’t’ have a chance to meet those other kids. I’m sure they’re right there at the top like Mike talked about, but we felt Jackson … just really handled himself like a big-leaguer as an 18-year-old and with that he just gives you the confidence for you to go in there and fight for that kid and say that this is the guy that we should take.”

Matt Holliday said that his son would have plenty of support in Sarasota. The elder Holliday coached Nolan McLean, the right-handed pitcher from Oklahoma State who was taken in the third round, before he played in college, and longtime Orioles second baseman Brian Roberts, who’s a close friend, also lives in Sarasota.

Jackson is familiarizing himself with Orioles history and knows  he’s playing the same position as Cal Ripken Jr.

“It’s an honor to be able to be in this organization and play a position that he played for so long,” he said. “I hope that I can get here and play shortstop for a long time.”