4-run 5th, shutdown bullpen lead Orioles past Rays and back to .500; Rutschman's collision at plate - BaltimoreBaseball.com 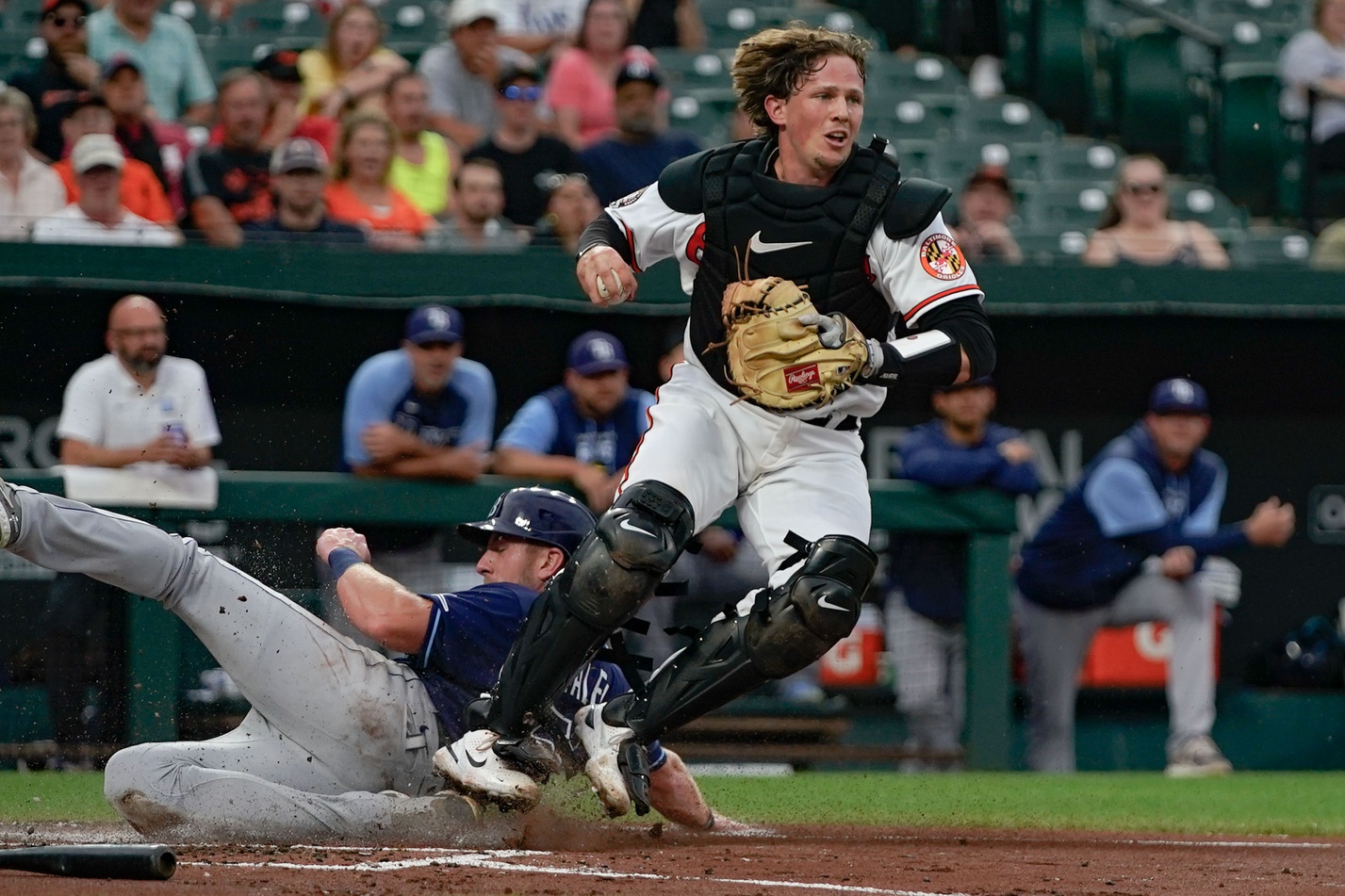 BALTIMORE—For the fifth time in the last two weeks, the Orioles are at the .500 mark. After losing two of three to the New York Yankees over the weekend, the Orioles began a four-game series against the Tampa Bay Rays with a 5-1 win before an announced crowd of 9,606 at Camden Yards on Monday.

The Orioles clinched their second straight winning month for the first time since May and June 2016 and need just five wins to surpass their win total of last season when they were 52-110.

Ryan McKenna led off with a single and, after Jonathan Araúz struck out, Cedric Mullins bunted for a single, his fifth bunt hit of the season. Adley Rutschman was hit by a pitch, and Ryan Mountcastle singled to score McKenna and Mullins.

Anthony Santander bounced to first, and Ji-Man Choi tried to throw to second to force Mountcastle, but the ball hit him in the back and went into left field. Rutschman scored, and Mountcastle scored on a sacrifice fly by Hays to make it 5-1.

The Rays loaded the bases against Voth with one out in the second. Brett Phillips hit a hard shot to the mound that Voth fielded and fired home. Luke Raley was forced out at the plate but slid hard into Rustchman, taking out his legs and preventing a throw to first.

“I just wanted to make sure my foot was on the base, and we got the first out,” Rutschman said. “I didn’t really see the play. I was focused on getting out.”

“I’ve seen tough collisions,” Hyde said. “That wasn’t a tough collision. That was awkward. When it’s awkward, it definitely scares you, but once Adley popped up, I didn’t think anything of it. That was a clean play, honestly.

“We’re so used to in this game now [of] not seeing contact that when you see a little bit of contact, everybody wonders if that was a clean play or not. It was definitely a clean play and [Raley] was just going hard into the corner of the plate.”

The Orioles took a 1-0 lead in the bottom of the second against Rays starter Corey Kluber (6-6) when Santander, Hays and Ramón Urías began the inning with singles. Rougned Odor flied to right to score Santander while Hays and Urías moved up a base.

They stayed at second and third when McKenna and Araúz both fouled out.

Brandon Lowe homered to right leading off the third, his sixth. Raley, who was booed when he came to the plate after he upended Rutschman, doubled with two outs. Taylor Walls walked and Jason Lowe struck out.

In three innings, Voth allowed a run on five hits, walked three and struck out two. Since July 10th, he had thrown just 2 1/3 innings.

“I was going out there and trying to go as far as I could,” Voth said.

Baker relieved Voth and pitched a scoreless fourth. After Randy Arozarena singled to start the fifth, Nick Vespi (3-0) relieved Baker and struck out the three batters he faced. Vespi was relieved by Dillon Tate with one on and two outs in the sixth.

“It makes it easier when everyone’s hot,” Vespi said. “It’s contagious. Everyone goes in there and does their job.”

Tate retired his three batters, and Pérez recorded the last out in the seventh and pitched a scoreless eighth. Bautista pitched the ninth to close the game.

“They all did great, Every single one who came into the game today helped out,” Voth said.

“It’s just a tribute to the guys, their character, their work ethic,” Rutschman said. “They show up every day. They come to the mound with a purpose. I’m very fortunate, and it’s very fun to catch those guys.”

Araúz injured a finger when he was out at second in the eighth, trying to stretch a single into a double.

“He jammed his finger into the base. It’s a little bit of a sprain,” Hyde said. “He’s getting checked out right now. As of right now, he’s day-to-day.”