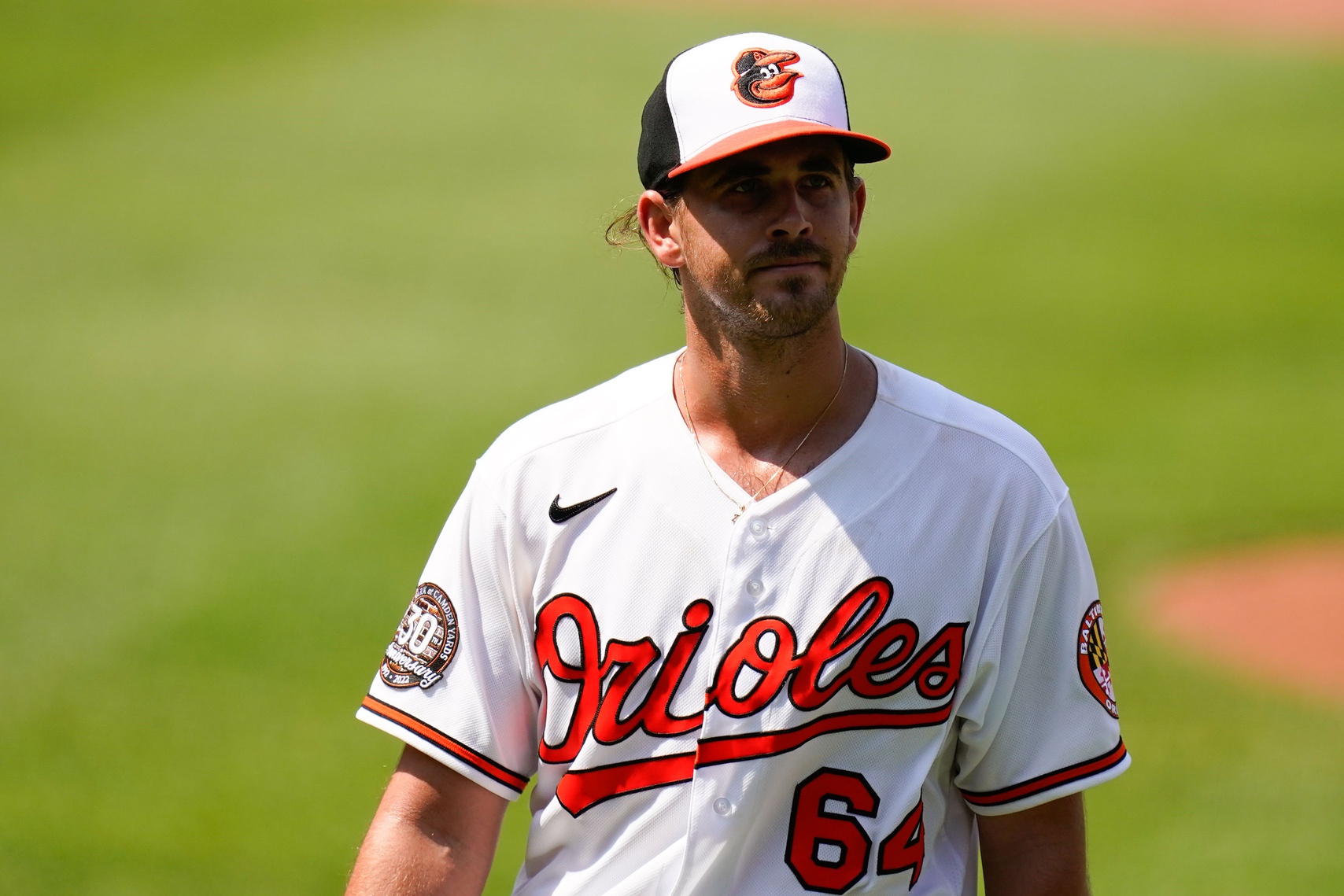 BALTIMORE—After a night when the Orioles delivered one of their most impressive and satisfying comeback wins, they seemed to wilt on a 97-degree Sunday afternoon, losing to the New York Yankees, 6-0, before an announced crowd of 25,623 at Camden Yards.

The Orioles (47-48) lost two of three to the Yankees (66-31), and their six- run loss was their worst since a 9-3 defeat to the Mariners on June 29th at Seattle. They suffered their seventh shutout, their first since June 28th.

It came one day after they overcame a 3-0 Yankee lead to win 6-3 with speed, power and a dominant bullpen.

On Sunday, the weather was so warm that home plate umpire Scott Barry was regularly attended to between innings by Orioles head athletic trainer Brian Ebel, who applied ammonia towels.

New York centerfielder Aaron Hicks paused during an at-bat to drink Gatorade, and the regular Sunday “Kids Run the Bases” was canceled because of the heat.

Jose Trevino singled in front of rightfielder Trey Mancini with one out in the third and scored on a two-out double by DJ LeMahieu against Oriole starter Dean Kremer. Aaron Judge followed with his major-league leading 37th home run of the season and third of the series. He has homered nine times in 15 games against the Orioles, which makes one wonder why they keep putting him in a position to beat them.

“I don’t think anybody should pitch to him,” catcher Robinson Chirinos said. “The guy is unbelievable. He’s hitting good pitches. He’s hitting mistakes.

“Normally when a guy’s hot, he’s hitting doubles and singles. He’s hitting the ball out of the ballpark, and it’s crazy. He’s a good hitter. What can you say?”

Chirinos wanted Kremer to thrw a curveball down and away, but it was up and in and Judge hit it 456 feet.

In the top of the sixth, Kremer hit Anthony Rizzo with a pitch and left after Gleyber Torres flied to right.

“I just thought he made a couple of bad pitches,” manager Brandon Hyde said.

Kremer was not available for comment after the game.

Left-hander Nestor Cortes (8-3) pitched six scoreless innings, giving up six hits and striking out six. In two starts against the Orioles, he has allowed nine hits in 11 shutout innings, striking out 18.

“He has multiple pitches he can throw for strikes,” Hyde said. “He can throw them on both sides of the plate. He can give you some different arm angles. He’s got great command of all of his pitches.

“He doesn’t have many middle misses. We had one opportunity to score there early, but besides that, not many baserunners on him. It’s a tough at-bat, and we didn’t swing the bat very well against him.”

In the second, the Orioles had their best opportunity when Adley Rutschman doubled with one out and moved to third on a single by Ramón Urías. Cortes struck out Tyler Nevin and Chirinos to end the inning.

In the bottom of the seventh, Nevin singled against Clarke Schmidt, and Cedric Mullins walked with two outs. Mancini grounded to short, and Mullins was forced at second.

An RBI single by Hicks against Rico Garcia in the ninth made it 6-0. He left the game when his hamstring tightened after reaching first.

Schmidt pitched three innings for his first save.

The Orioles had eight hits, and left 10 runners on base.

“It’s the middle of July, and it was really hot out there today. We didn’t play our best baseball, but we played really well the past two nights,” Hyde said. “That’s a first-place club with the best record in baseball. I thought we played them tough, but today just wasn’t our day.”

Fully vaccinated: The Orioles announced that all members of the 40-man roster are fully vaccinated for Covid-19. Two players, left-handed pitcher Keegan Akin and outfielder Anthony Santander, were put on the restricted list and couldn’t play in the Orioles’ four-game series in Toronto last month because Canada requires professional athletes to be fully vaccinated before entering the country.

Waiting game: Garcia pitched for the first time in two weeks while infielder Jonathan Araúz continues to wait for his chance.

Garcia had pitched just once, on July 10th, the day his contract was selected from Triple-A Norfolk. Hyde had him warming up several times since but he didn’t appear in a game until Sunday. He allowed one run in two innings.

“At times it can be tough,” Garcia said. “I’m the kind of person that’s real in the moment, so I try not to think of future or past, and I try to be ready at all moments so that when my name’s called, there’s no excuses.

“When I do throw, [I don’t want to say] ‘I haven’t thrown in two weeks or whatever,’” Garcia said. “I don’t want to make any excuses like that. I just try to stay ready as best as I can. My mentality’s likem ‘I can go in at any second,’ so it’s just that mentality of staying ready so I don’t have to get ready.”

Araúz hasn’t played since he pinch-hit against the Los Angeles Angels on July 8th and hasn’t started since July 7th.

“Circumstances in the game changed when he was about to go in to pitch,” Hyde said before the game. “It’s hard, it’s definitely hard. You want to put these guys in a position to have success. It’s not easy to pitch or play when  you haven’t played in a while, and both those guys have been pros. They’ve kept themselves prepared. Araúz does a great job pregame to simulate game activity and try to stay as game ready as possible.”