Mateo's speed, Urías' power lead Orioles to 6-3 comeback win over Yankees: Lyles: 'Man, you need to watch out for the Orioles' - BaltimoreBaseball.com 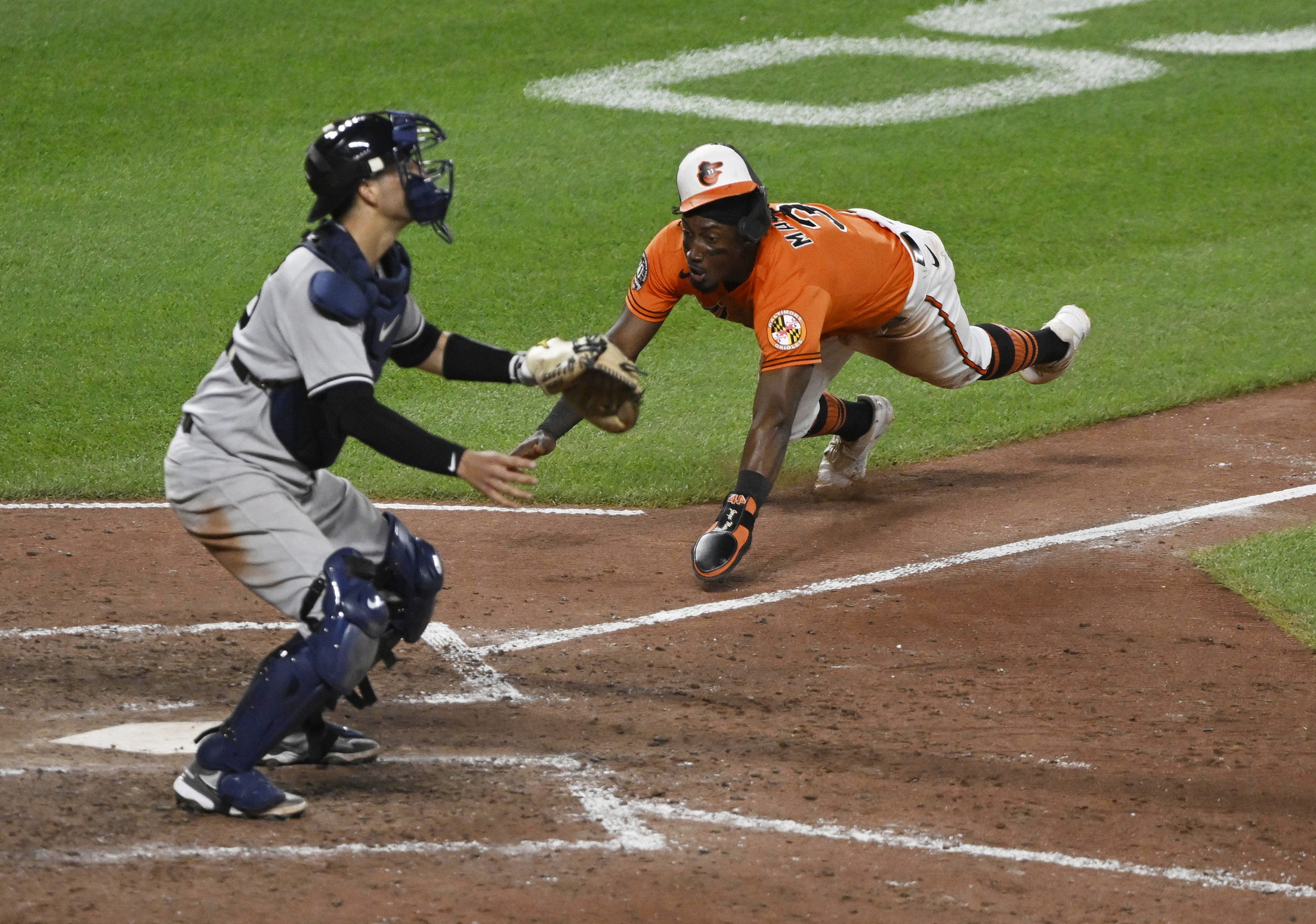 BALTIMORE—The Orioles continued their string of unlikely wins, spotting the New York Yankees a three-run lead and coming from behind thanks to speed on the basepaths.

Jorge Mateo helped produce the go-ahead run with a dash to third on an errant pickoff throw, and the Orioles again reached .500 with a 6-3 win over the Yankees before a boisterous crowd of 38,361 at Camden Yards on Saturday night.

New York (65-31) led, 3-0, after 3 ½ innings, and the lead could have been wider had the Yankees not left seven on base in the first four innings. Overall, they left 11 and went 1-for-14 with runners in scoring position.

The Orioles (47-47) scored two runs in the fifth against Yankees starter Gerrit Cole (9-3).

With two outs, Mateo singled, stole his 23rd base and scored on a single by Cedric Mullins. Mullins stole second and scored on a double by Adley Rutschman, and the Orioles trailed, 3-2.

“The speed factor with Mateo was a difference-maker in tonight’s game,” manager Brandon Hyde said.

Ramón Urías doubled to start the seventh and scored on a single by Mateo to tie the score, 3-3.

Cole was removed in favor of Albert Abreu, and Abreu’s wild pickoff throw allowed Mateo to sprint to third and score on a sacrifice fly to center by Mullins to give the Orioles a 4-3 lead.

“As soon as the ball bounced, I immediately thought third base all the way,” Mateo said through a translator.

“He was flying around the bases,” Hyde said.

Urías, who has five multi-hit games in his last eight, hit a two-run home run in the eighth against Shane Greene. He’s hitting .303 with four homers and 16 RBIs since he returned from the 10-day injured list on July 4th.

“Showed that sneaky power there in the eighth with a huge, huge tack-on homer and took really good at-bats besides that,” Hyde said.

Bautista, who struck out the side in the eighth on Friday night, retired New York in order in the eighth, and caught Giancarlo Stanton looking to end the inning.

In his first appearance since retiring two batters in the All-Star Game, López recorded his 18th save.

DJ LeMahieu reached on an error by first baseman Ryan Mountcastle to start the ninth, Aaron Judge singled, but López retired Anthony Rizzo on a grounder to first, Gleyber Torres on a fly to right, and caught Josh Donaldson looking to end the game.

The Orioles moved to within a half-game of fourth-place Boston in the American League East with the win. They’re 3 ½ games out of the final wild-card spot.

LeMahieu led off the game with an infield single and scored on a double by Judge.

Matt Carpenter hit his 14th home run in 34 games with the Yankees leading off the second for a 2-0 lead.

In the top of the third, Judge doubled and stole third. Josh Donaldson and Carpenter walked before Aaron Hicks flied to left, ending the inning.

New York took a 3-0 lead in the fourth on singles by Isiah Kiner-Falefa, LeMahieu and Judge.

“A lot of things weren’t there, but we managed to stay in the game,” Lyles said. “Guys are stepping up, left and right … We’re able to do a lot of different things.”

“These boys are special,” Lyles said. “They’re fun to watch. They’ve been awesome … The fans should be excited. If they came out tonight, that was a good ballgame. It took a little longer. That’s on my part pretty much for the struggles I went through. Man, you need to watch out for the Orioles.”