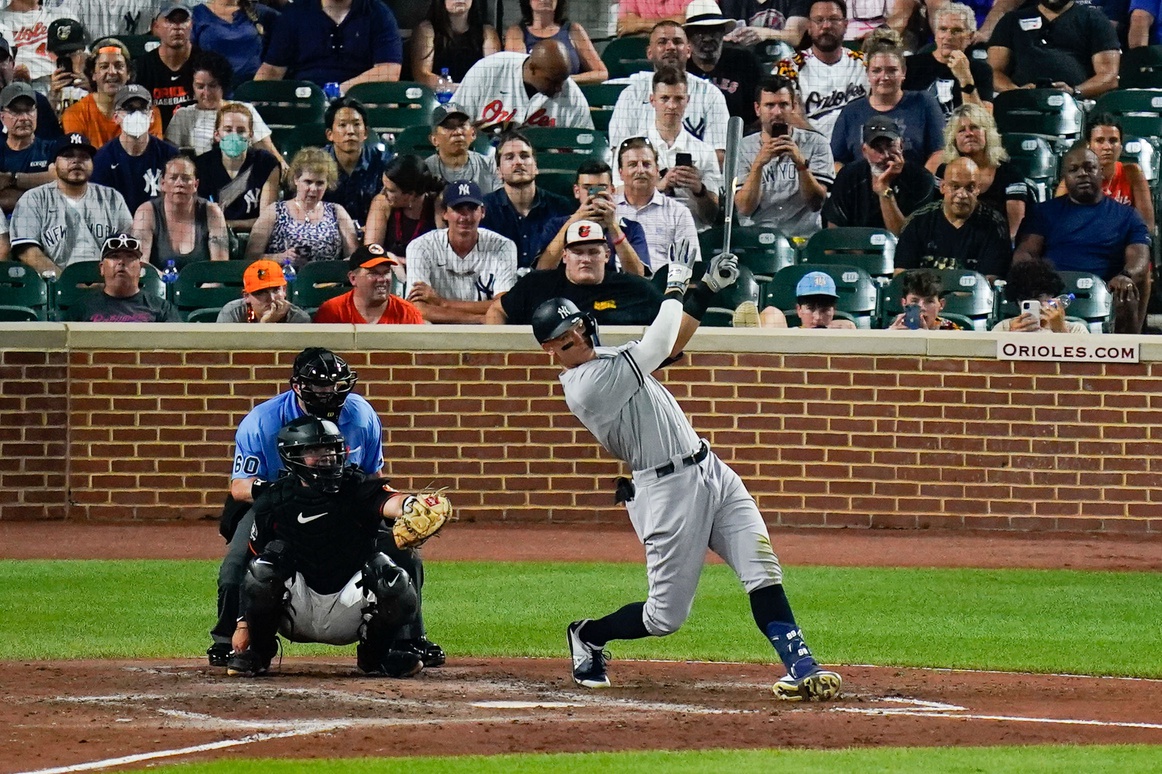 On Friday night, Aaron Judge hit two long home runs and, although the Orioles rallied to within a run, the Yankees defeated the Orioles, 7-6. before an announced crowd of 28,468 at Camden Yards.

The Orioles (46-47) lost two of three to the Rays before the break, but they returned to a ballpark that seemed more alive than it had it in several years.

“I loved it. I thought our fans were absolutely outstanding,” manager Brandon Hyde said. “There was so much energy in the ballpark, and we did feel that in the dugout.”

New York (65-30), which has the best record in the majors, arrived in Baltimore at 4 a.m. on Friday after a doubleheader loss in Houston. Judge, who has a major-league leading 36 home runs, carried them to victory.

In the top of the third, Judge hit his 35th home run against Oriole starter Tyler Wells (7-6), who got the first two outs of the inning and walked Joey Gallo. After DJ LeMahieu singled, Judge hit a 436-foot blast into the Yankees’ bullpen.

In the bottom of the third, Ramón Urías singled and scored on a double by Jorge Mateo against Yankee starter Jameson Taillon. A single by Cedric Mullins scored Mateo, With two outs, Anthony Santander singled and Ryan Mountcastle walked.

Lucas Luetge (3-3) replaced Taillon, whose 2 2/3 innings was his shortest outing of the year, and Austin Hays fouled out to catcher Jose Trevino to end the inning.

Consecutive doubles by Josh Donaldson and Jose Trevino in the fourth put the Yankees ahead, 4-2.

In the fifth, Judge’s 36th home run, which landed beyond the Yankees’ bullpen, was hit 465 feet, tied for the third longest in the history of the ballpark.

“It doesn’t help when you throw it down the middle to him,” Wells said. “The first home run I gave to him, I was trying to go up there, and just didn’t get it in enough. The second one, he just took a pitch right down the middle and he hit a long way.”

Joey Krehbiel allowed a run in the sixth on a run-scoring singleby Isiah Kiner-Falefa.

The Orioles scored in the sixth to cut the lead to 6-4 on a walk to Hays by Jonathan Loáisiga, a double by Rougned Odor, and an infield out by Urías.

“I thought our players performed well. We battled back,” Hyde said. “I thought we took good at-bats, and we battled tonight. We came up a run short. The atmosphere was phenomenal.”

In the seventh, Mullins singled against Yankee reliever Aroldis Chapman and advanced to third on two wild pitches. Trey Mancini walked and, with one out, Santander hit his 16th home run to left — a 424-foot shot on a slider — to cut the lead to 7-6 and chase Chapman.

“The crowd was incredible,” Santander said. “They keep supporting us to the very end, a lot of great energy. Unfortunately, we couldn’t get the job done tonight, but it was great to see that the fans were super into it.”

Michael King relieved Chapman and recorded the final two outs in the seventh and the first of the eighth. With a 1-2 count on Urías, he hurriedly left the game, and his right elbow was examined after the game.

Clay Holmes replaced King and struck out Urías and retired Mateo on a grounder to shortstop. Holmes pitched a scoreless ninth for his 17th save.

“Whenever you’ve got a guy like Michael King and Clay Holmes, who’ve been really good for them all year, it’s a challenging thing to do,” Wells said. “We’ve been doing this all year. Definitely had no doubts about it, but it’s a tough two guys to come back from.”

The Orioles had dominant relief appearances from Félix Bautista and Dillon Tate, who struck out the side in the eighth and ninth.

“I feel like the majority of our losses are like this,” Hyde said. “We continue to fight and scrap and claw our way back into games that sometimes would get away from us in the past. Our dugout stays into it, and we’re right there. Holmes is really good, and he came in and shut the door down.”