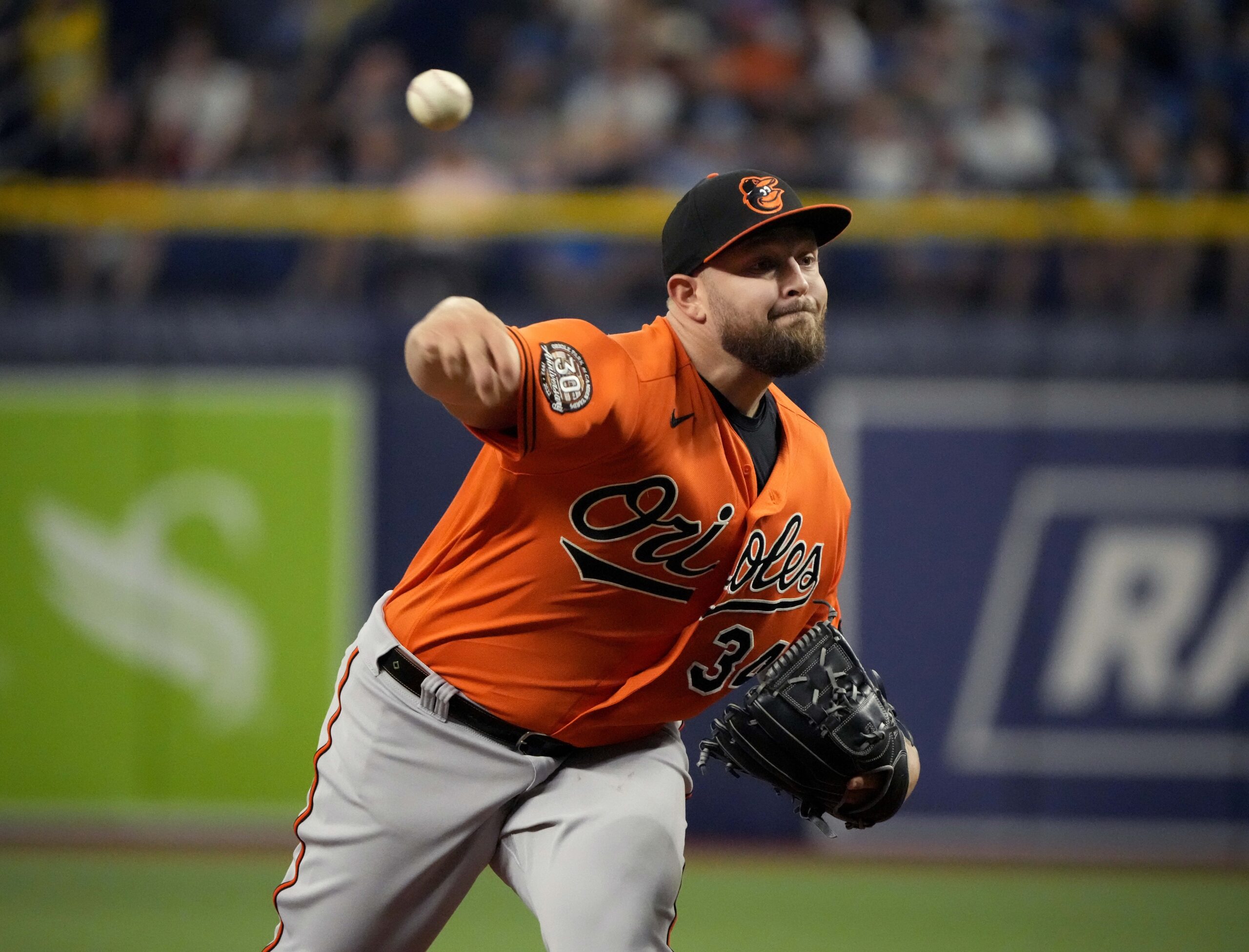 ST. PETERSBURG, Florida—After a disheartening one-run loss that ended their 10-game winning streak, the Orioles bounced back with an exciting 11-inning victory over the Tampa Bay Rays that ensured they’d go into the All-Star break as no worse than a .500 team.

Ryan Mountcastle’s bloop single to right scored Jorge Mateo and Cedric Mullins to give the Orioles a 6-4 win over the Rays before an announced crowd of 19,886 at Tropicana Field on Saturday.

“Last night stunk,” said manager Brandon Hyde, whose team left the bases loaded twice in a 5-4 loss. “Bad feeling, just the way that sixth inning went and the way we lost that game.

“We got down early [today], and continued to battle back, get some big hits late, our bullpen once again was phenomenal.”

After Rougned Odor, who was the automatic runner at second in the 11th, was thrown out trying to steal third, Mateo tripled to center against Luke Bard (1-1). Mullins walked and, after Trey Mancini popped out, he stole second and scored along with Mateo on Mountcastle’s bloop hit.

“It turned out to be enormous,” Hyde said of Mullins’ steal. “With Mateo at third, it’s going to be really hard to throw through … turned out to be a huge play, aggressive baserunning by our guys.”

The normally reserved Mountcastle pumped his fist after he reached first.

The game went to extra innings after Adley Rutschman hit a pinch-hit home run to start the eighth against Jason Adam to tie the score, 3-3. It was the rookie catcher’s fifth home run of the season, and the Orioles’ first pinch-hit homer of 2022. Rutschman had popped out and struck out with the bases loaded on Friday.

“Adley’s learned on the fly up here,” Hyde said. “He’s a winning player.”

Jorge López (4-5) pitched the ninth and 10th, and after Cionel Pérez got two outs in the 11th, Joey Krehbiel recorded his first save.

The Orioles (46-45) have won 11 of 12 and broke the Rays’ five-game winning streak. They also snapped a 10-game losing streak at Tropicana Field.

“For us to bounce back after yesterday, close game to play another close game is huge, especially against these guys,” Mountcastle said. “They’re a really good team. It’s been a while since we’ve beaten them here, I feel like. For us to finally get one is big.”

Oriole starter Dean Kremer needed 32 pitches to retire the Rays (50-41) in the first inning. He allowed three singles and a threw a wild pitch, which scored Brandon Lowe, who was reinstated from the 60-day injured list.

Anthony Santander doubled against Ryan Yarbrough to start the second. He took third when Austin Hays grounded to third and scored on a double by Ramón Urias to tie it.

Kremer allowed two runs in a sloppy third inning where Lowe scored on another wild pitch and Randy Arozarena, who continues to torment the Orioles, homered on the next pitch for a 3-1 lead. In 29 games against the Orioles, Arozarena has homered 12 times.

Urías, who has three multi-hit games in his last four, doubled to begin the fifth inning and scored on Tyler Nevin’s single to narrow the deficit to 3-2.

Kremer was removed after four innings. He allowed three runs on three hits, hit a batter and threw two wild pitches. He struck out four.

“For these guys to come back and pull out the win, it’s a testament to what’s going on in the clubhouse,” Kremer said.

In the bottom of the eighth, Tate walked Arozarena, who stole second, and Jason Lowe. The runners tried for a double steal, and Rutschman, who had allowed 10 straight stolen bases, threw out Arozarena at third.

“It was a big situation, and definitely a big out. Urías put down a good tag, and we were able to get him,” Rutschman said.

In the bottom of the ninth, López struck out Taylor Wells and Christian Bethancourt. On a 3-2 count, he hit Wandy Diaz on the left arm. Brandon Lowe was caught looking to send the game into extra innings.

In the top of the 10th, Hays, who was the automatic runner at second, advanced to third on Urías’ foul pop and scored on Rutschman’s sacrifice fly to center.

Tampa Bay tied it at 4 on an RBI single by Ji-Man Choi in the bottom of the 10th.

On Sunday, the Orioles will try to end the first half with a series win, which would put them two games over .500. No matter what, they’ll begin the second half with at least a .500 record.

“There’s a bunch of great players in this clubhouse,” Mountcastle said. “I always knew, even last year, if we meshed together, we could win some ballgames. So glad we’re doing that now, and just keep it going to the second half.”

Notes: Reliever Félix Bautista was unavailable because of “upper-body soreness,” according to Hyde. … The Orioles reported that reliever Travis Lakins, who’s on the 60-day injured list because of right elbow inflammation, has had a setback. … Right-hander Denyi Reyes, who’s on Triple-A Norfolk’s seven-day injured list, will begin a rehab assignment with High-A Aberdeen. … Single-A Delmarva infielder Anthony Servideo has been placed on the seven-day injured list. … Jordan Lyles (6-7, 4.37) will start the Orioles’ final game before the All-Star break on Sunday. Corey Kluber (5-5, 3.58) will start for the Rays.

Double-A Bowie and Akron were rained out.