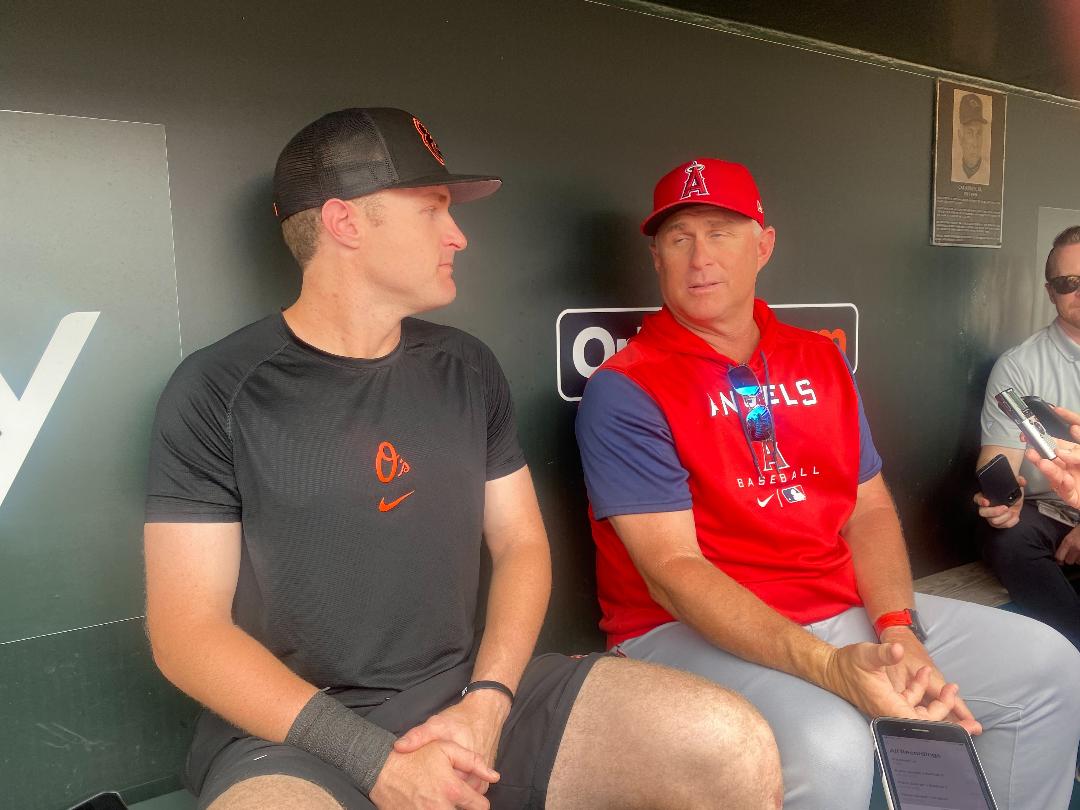 BALTIMORE—For the first time in their lives, Orioles infielder Tyler Nevin and Los Angeles Angels interim manager Phil Nevin will face each other in a major league game this weekend.

That father-son moment has been delayed until Saturday because the elder Nevin is serving the final two games of a 10-game suspension for his part in last month’s brawl between the Angels and Seattle Mariners.

“I really have no idea what to expect,” Phil Nevin said sitting beside his son in the Orioles’ dugout on Thursday evening. “Earlier I was meeting with the staff, going over some stuff that we would normally do for the game, and I got to his name, and I didn’t even know what to call him. I finally said: ‘Nevin,’ and the whole room laughed.”

Tyler Nevin isn’t in the starting lineup for Thursday’s game, but Orioles manager Brandon Hyde promised he’d make certain Nevin would play this weekend in one of the games his father managed.

On Thursday and Friday, Phil Nevin will sit in the stands and watch the game. He saw his son play a handful of minor league games when Nevin was a coach with the New York Yankees.

“This moment for our family is pretty incredible,” Tyler Nevin said. “It hasn’t happened much throughout baseball history, something that’s really going to be special to be a part of. Our family is really going to take it all in and seeing how we both got to this point, it’s hard to put into words.”

The elder Nevin was the overall No. 1 draft choice by Houston in 1992 and enjoyed a 12-year career with seven teams before being named interim manager when the Angels fired Joe Maddon last month.

“I just always wanted to sit in the stands and have a hot dog and a beer and watch my son play a major league game,” Phil said. “Now I get to do that tonight, but I probably shouldn’t have a beer in my hand. I just wanted to watch him play, and it didn’t work out.

“I think when we get closer to Saturday and we get in the heat of the moment, it will be more of a competitive nature, but right now I’m looking forward to watching him play, if he gets in there tonight, or if it’s tomorrow. Somebody asked me, ‘What am I rooting for?’ I want to win, but I want him to do well obviously, but not at the cost of us losing a game. My players, my coaches, we’ve had some discussions, some jokes, jabs here and there, but for the most part, they get it.”

Last year, Tyler Nevin played six games for the Orioles but none against the Yankees.

Tyler joked that his mother and younger brother Kyle, who played three years of college baseball at Baylor and hopes to be chosen in the draft, will be rooting for him: “Definitely for me in my at-bats,” he said, laughing. “I’m not in the lineup tonight. If I don’t have a hand in the game, I would think they’d root for [the Angels]. We could maybe get a split jersey.”

Tyler Nevin said the situation is easier for him than his father.

“Absolutely, I just get out there and play a game. He’s got more to be worried about. He wants me to get a hit here, but not do too much damage,” he said. “I’m going to be playing in front of him for a little bit. This is the first time, for sure. He usually brings the hits when he comes into town, for sure. I hope that trend keeps up.”

Notes: Triple-A Norfolk infielder Gunnar Henderson will play in the Futures Game, which will be held at Dodger Stadium on July 16th. … Starting pitcher Kyle Bradish, who’s on the 15-day injured list because of right shoulder inflammation, will throw a rehab game on Saturday for Double-A Bowie at Somerset. … Single-A Delmarva pitcher Carter Baumler has been placed on the injured list because of right shoulder inflammation.

Call for questions: I’ll be answering Oriole questions in the next few days. Please email yours to: [email protected]