Orioles walk it off on a hit-by-pitch in 10th; Rutschman ties game in 9th; López continues to struggle - BaltimoreBaseball.com 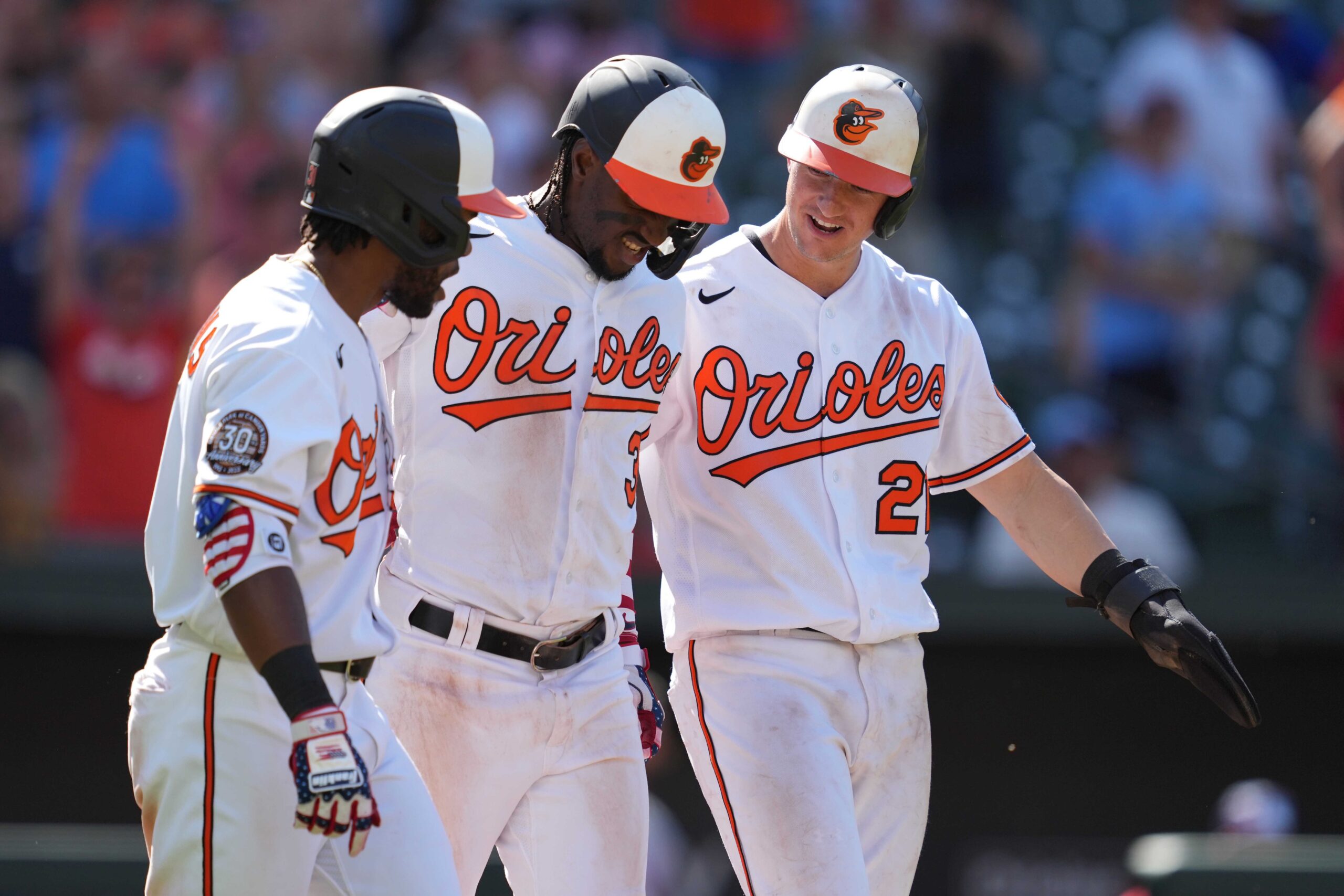 BALTIMORE—The Orioles won a fascinating game Monday in a most unlikely way. Jorge Mateo was hit by a pitch by Texas reliever Matt Moore with the bases loaded in the bottom of the 10th inning for a walkoff 7-6 win over the Rangers before an announced July 4th crowd of 18,670 at Camden Yards.

After Oriole closer Jorge López, who blew saves on Friday and Saturday in Minnesota, allowed a leadoff home run to Marcus Semien to give the Rangers a 6-5 lead in the top of the ninth, Oriole catcher Adley Rutschman delivered a game-tying, two-out double that scored pinch-runner Ryan McKenna in the bottom of ninth to send the game to extra innings.

Austin Hays was the automatic runner at second to begin the 10th. Rougned Odor bunted Hays to third. Ramón Urias, who just came off the injured list, was walked intentionally. On Moore’s first pitch to Mateo, he hit him on the left quadriceps, setting off a celebration at first base.

“There’s a lot to unpack in that game,” manager Brandon Hyde said.

He cited the bunt single by Odor that moved Hays to third and set up the walk to Urias.

Hyde and Odor talked about the bunt before the inning.

“I was trying to move the runner.” Odor said. “He asked about [facing] the lefty, and I’m like, ‘I’m ready to bunt. I’m going to do my best to get that ball down and move the runner up.’”

López, who blew one-run leads on on Friday and Saturday, fell behind Semien 3-and-1 and threw a fastball that was up in the zone.

“I thought he had really good stuff after that, and he just needs to get through this,” Hyde said.

In the bottom of the ninth, Trey Mancini led off with a single and was replaced at first by McKenna. He scored when Rutschman’s double hit off the right-field wall. As clutch as Rutschman’s hit was, he wanted to talk about Odor’s bunt.

“That was massive,” Rutschman said. “Team baseball right there and just the fact that he was able to get it down was awesome. Really big.”

The Orioles (37-44) scored a run in the second and third against Texas starter Dane Dunning. Rutschman beat out an infield single and moved to second when Dunning hit Hays with a pitch. After Odor struck out, a single by Jonathan Araúz scored Rutschman.

In the third, Mateo reached on catcher’s interference and scored on a double by Cedric Mullins.

Oriole starter Dean Kremer, who had allowed three hits and two walks in the first four innings, had an awful fifth. Entering the fifth, Kremer had a streak of 22 2/3 scoreless innings and allowed just four earned runs this season. In the fifth, he allowed five runs.

With one out, Josh Smith, Semien and Corey Seager singled to load the bases. Smith scored on a sacrifice fly by Adolis Garcia, and Semien scored on a single by Nathaniel Lowe to tie the score at 2. Mitch Garver hit a three-run home run to left, his ninth, and Texas (37-41) led, 5-2.

“It was really just one bad pitch,” Kremer said. “The pitch to Lowe with two strikes … It kind of got away. It’s the one I want back. After that, it just happened. Numbers-wise, not the best outing, but all the damage was done in one inning. It was kind of on two pitches.”

Kremer allowed five runs on eight hits in 4 2/3 innings, walking two and striking four. He was relieved that the Orioles came back to win.

“Huge props to the offense and the bullpen. They picked me up big time,” Kremer said. “To come back like that, pretty good.”

Mullins hit his seventh home run to cut the lead to 5-3 in the fifth.

The Orioles tied it at 5 in the sixth when Rutschman walked to lead off. Hays was called out on strikes. Odor hit a sinking liner to left that handcuffed Steven Duggar, and it went for a double.

Arraúz hit a roller to first base that went through Lowe for an error, allowing Rutschman and Odor to score.

Notes: Kremer’s scoreless streak was the longest by an Orioles starter since Mike Mussina threw 27 scoreless innings from September 21st, 1995-April 2nd, 1996. … Mancini was supposed to be the designated hitter and Ryan Mountcastle was scheduled to play first. They switched positions shortly before the game because Mountcastle had a sinus condition. … Rutschman’s single broke an 0-for-18 streak. … Austin Voth (0-1, 7.34) will start on Tuesday night. The Rangers haven’t named their starter.

Urías back: Urías was reactivated from the 10-day injured list. Urías had been out because of a strained left oblique muscle. He hit for Araúz in the eighth after two rehab games at Double-A Bowie this weekend.

“The first game, not really, I felt a little scared, afraid to swing,” Urías said. “The second game, I felt more confident. I was swinging like everything feels good. I feel ready now.”

Urías didn’t know what to expect because he hadn’t had an oblique injury before.

To make room for Urías, infielder Richie Martin was optioned to Triple-A Norfolk.