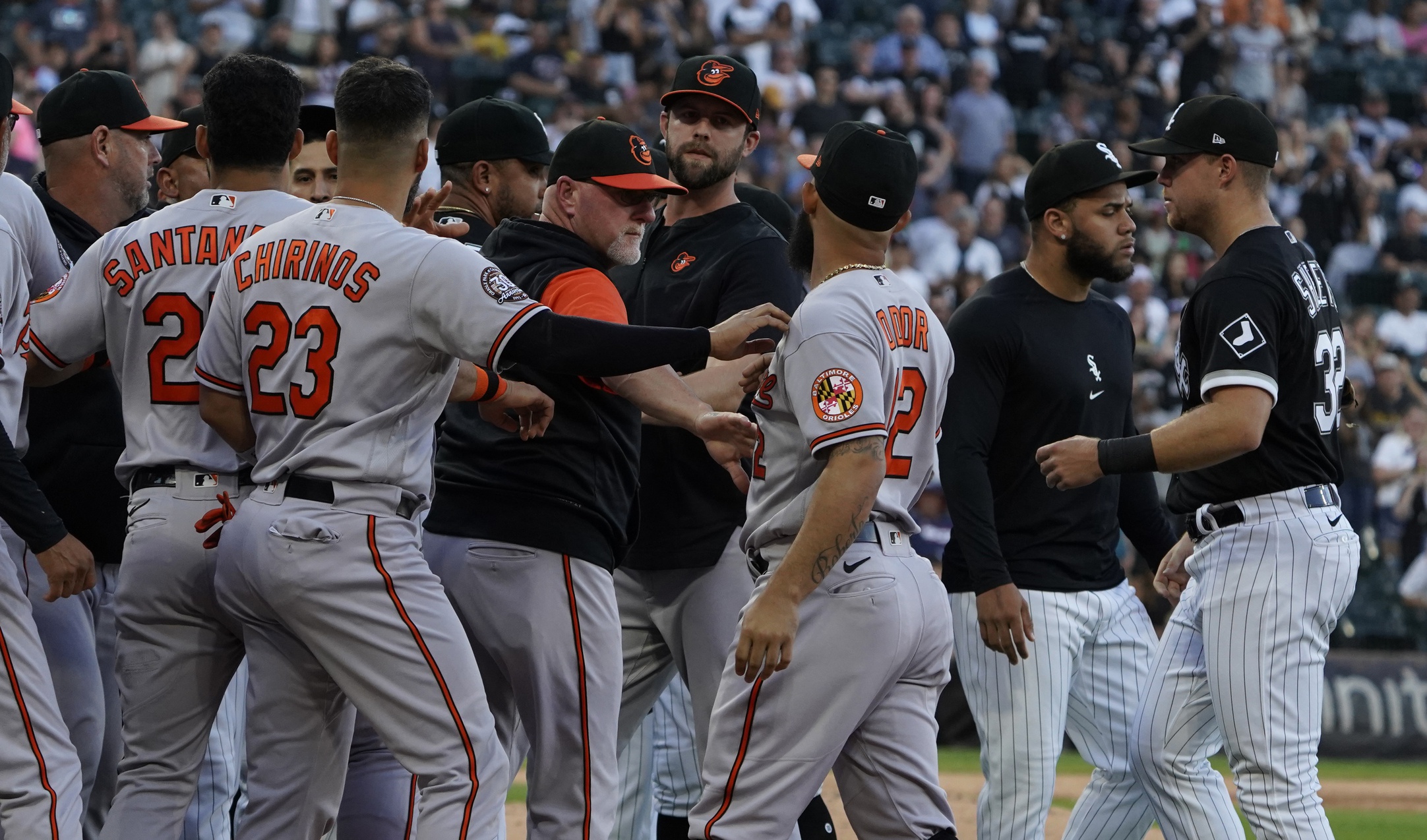 CHICAGO—The Orioles won the first game of their four-game series with the Chicago White Sox behind strong pitching and stellar outfield defense. On Friday, it was pitching and aggressiveness that carried them to their third straight win, 4-1, over the White Sox before an announced crowd of 27,943 at Guaranteed Rate Field.

“All those guys had great stuff,” manager Brandon Hyde said. “These guys are just exceeding expectations. I’m just really happy and proud of them.”

The five pitchers were all waiver-wire claims.

Jake Burger’s RBI double in the second inning was the only hit for Chicago (33-36).

Oriole centerfielder Cedric Mullins led off with a bunt single against White Sox starter Michael Kopech. It was his third bunt hit of the season. Mullins stole second, his 16th, moved to third on an infield out by Trey Mancini and scored on a wild pitch by Kopech.

In the second inning, shortstop Jorge Mateo was hit in the back by Kopech (2-4) with two outs, and he started yelling at Kopech because it appeared intentional.

“He gets hit in the back there after squaring a bunt. He didn’t like it,” Hyde said. “It was one of those competitive things that happened. We moved on pretty quickly.”

On Thursday, Dean Kremer hit Chicago second baseman Josh Harrison with a pitch on his right triceps, causing him to leave the game. Harrison was not in the lineup on Friday.

Both benches and bullpens emptied. Hyde tried to hold back his players. No punches were thrown, and after some milling around, both benches were warned against retaliation.

After the game, Mateo said he didn’t think Kopech was trying to hurt him.

“I really don’t think so. I don’t know what happened there … but I don’t think it was intentional,” Mateo said through Orioles translator Ramón Alarcón.

Mateo said he wasn’t sure why Anderson was yelling at him.

In the fourth, catcher Adley Rutschman doubled with one out. In the second, he was robbed of another extra-base hit when Pollock made a diving in left. Rutschman moved to third on an infield out by third baseman Tyler Nevin and scored on a balk by Kopech to put the Orioles ahead, 3-1.

Mateo walked and then stole second, his 19th steal of the season, but didn’t score.

“I feel very good, very happy that we were able to finish the game and win the game, and tomorrow hopefully win the series,” Mateo said.

Voth pitched three innings, allowing a run on three hits. It was his longest stint since 2020 and he’ll now be part of the rotation because Bradish is on the 15-day injured list.

Joey Krehbiel relieved him and retired all seven batters to face him. Bryan Baker and Cionel Pérez each recorded four straight outs, and Jorge López pitched a spotless ninth for his 13th save.

“The bullpen is just incredible right now,” Voth said. “It’s a lot of fun to watch. There’s a lot of great guys, and they’re pitching great, and I love rooting behind them.

“All these guys are talented, and it just shows that you can rebuild your career and continue to have success. You just have to have an opportunity. I think that’s what these guys are doing.”

In the eighth, Trey Mancini and Austin Hays doubled for the Orioles’ final run.

Minor league update: Triple-A Norfolk pounded out 21 hits in their 10-7 win over Lehigh Valley. The 21 hits are two short of their franchise record. Shortstop Jordan Westburg had five hits and is batting .413. Rightfielder Kyle Stowers and leftfielder Shed Long had four hits.

According to Tides broadcaster Pete Michaud, outfielder Robert Neustrom injured his shoulder in a collision with the outfield wall and could be out a week or two. Infielder Terrin Vavra is cleared to return after he was hit in the head by a pitch on Thursday night. Pitcher Denyi Reyes returned after being on paternity leave.