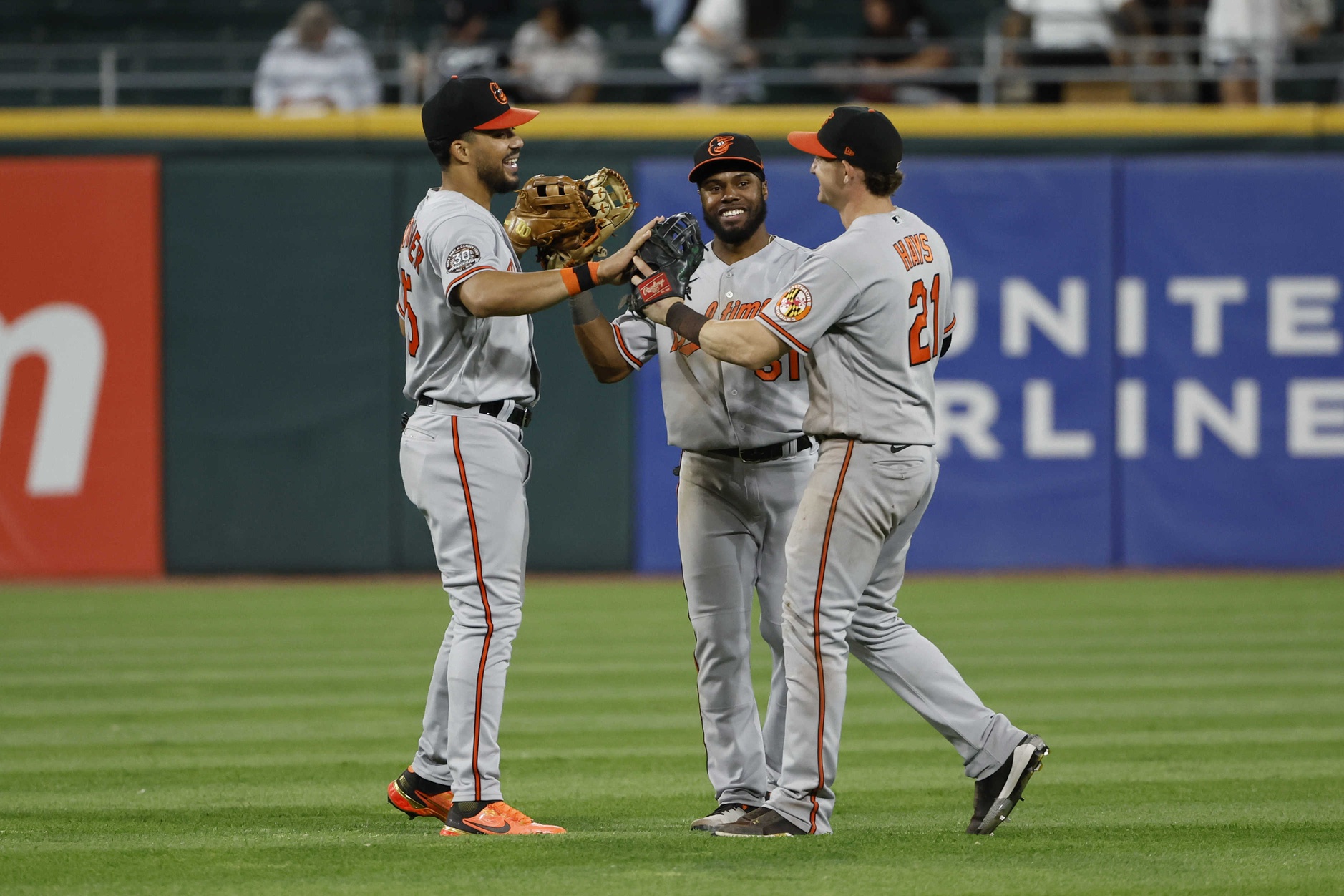 CHICAGO—Since returning from a strained left oblique muscle that delayed the start of his season by nearly two months, starting pitcher Dean Kremer has impressed the Orioles with his effectiveness.

Kremer threw into the sixth inning, and his outfielders backed him and the bullpen with exceptional defense in a 4-0 win over the Chicago White Sox before an announced crowd of 22,431 at Guaranteed Rate Field on Thursday night.

A third highlight was the power bat of rookie catcher Adley Rutschman, who hit a two-run homer and a run-scoring double to give the Orioles a 3-0 lead before centerfielder Cedric Mullins drove home the final run in the ninth.

Mullins also ran down two long drives in right-center, rightfielder Austin Hays threw out a runner at the plate and saved another run with a tremendous diving catch near the right-field foul line, and leftfielder Anthony Santander ran down a drive in left to end the seventh.

Orioles manager Brandon Hyde praised the outfield defense and another strong start by Kremer (2-1), who allowed seven hits in 5 2/3 innings, walking one and striking out four.

“That’s four good starts in a row for him,” Hyde said. “I’m really happy and encouraged by how he’s throwing the baseball. I thought he had multiple pitches going tonight. He had confidence. He attacked. He was on the plate … He was forcing contact. That’s a pretty good club and good lineup. He mixed pitches extremely well tonight.”

It was the Orioles’ seventh shutout and second in as many nights.

In the top of the third, Mullins singled and tried to score on a double by Trey Mancini but was thrown out on a close play at the plate.

Rutschman’s second home run, which scored Ryan Mountcastle, gave the Orioles a 2-0 lead in the fourth. Both of Rutschman’s home runs have gone to right field and been hit on the road.

Hays threw out Gavin Sheets at the plate when he tried to score on a single by Leury Garcia in the fourth. It was his sixth assist of the season.

“You know the potential. He has a phenomenal arm,” Rutschman said. “He’s just a fun guy to watch and you get excited anytime the ball’s hit his way.”

Hays’ throw was clocked at 96.4 miles per hour.

“Unbelievable,” Kremer said of the outfield. “Every single guy out there, all three of them … went and got it today. I was very impressed.”

A night after recording the sixth cycle in team history, Hays had a double in four at-bats but this was a night for memorable defense. His marvelous diving catch that carried him into foul ground on a Jake Burger sinking liner in the eighth was followed by Mullins’ excellent running catch — his fifth of the game — of a Sheets drive near the wall in right-center.

“They do a phenomenal job in big, key moments,” Rutschman said. “Huge, huge shift when they were able to track down those balls in the outfield. I really can’t say enough about them.”

The Orioles (32-39) stretched their lead to 3-0 on Rutschman’s RBI double that scored Hays in the sixth.

“He’s the type of talent that can change the dynamic of a clubhouse,” Kremer said. “When he gets hot, which he will pretty soon, he’s definitely a game-changer both behind the dish and at the plate. He keeps things pretty light, and he individualizes it for most guys as well. With me, he likes to keep it pretty light. We laugh and giggle, even in some of the most serious times.”

In the bottom of the sixth, Kremer got two quick outs before Burger doubled and Sheets walked. Félix Bautista struck out Seby Zavala to end the sixth, and he pitched a hitless seventh.

Dillon Tate worked a scoreless eighth because of the outfield defense. Mullins’ single in the top of the ninth scored Tyler Nevin for a 4-0 lead.

With a four-run lead, closer Jorge López stayed in the bullpen to begin the ninth as Zavala doubled and Garcia flied to right. After Lenyn Sosa walked, López was summoned. He struck out Anderson and Andrew Vaughn for his 12th save.

Notes: Mountcastle had two doubles and a single. … Chicago second baseman Josh Harrison left the game with a bruised right triceps after Kremer hit him with a pitch. … Austin Voth (0-0, 3.00) will face Michael Kopech (2-3, 2.38) on Friday night at 8:10. Kyle Bradish, who was supposed to start on Friday, will start on Saturday.

The IronBirds had only three hits. Catcher Andres Angulo had two of them.

Second baseman Terrin Vavra left the game after getting hit by a pitch. Vavra began the game with his first home run.

Single-A Delmarva was swept in a doubleheader by Lynchburg, Delmarva lost the first game, 3-2. Shortstop Noelberth Romero drove in both runs for the Shorebirds.

Lynchburg scored four runs in the top of the seventh in a 5-1 win in the second game. Delmarva, which ended the first half at 21-44, had just three hits.