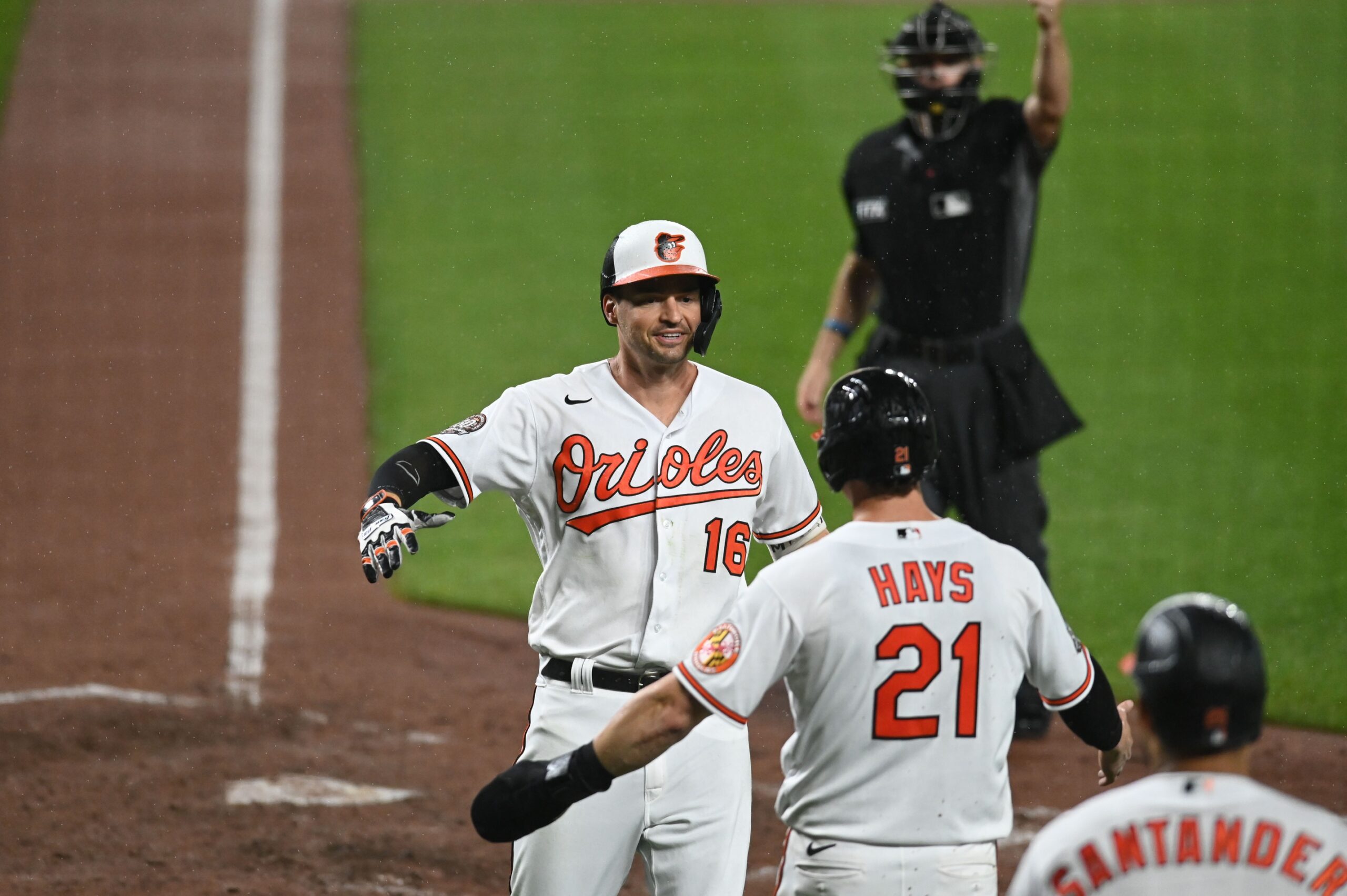 CHICAGO—Austin Hays was the sixth Oriole to hit for the cycle, but he was the first, and only Oriole, to accomplish the feat in six innings when he hit a single, double, triple and home run in Wednesday night’s rain-shortened 7-0 win over the Washington Nationals.

It came one night after he had struck out in all four at-bats as the Orioles managed only four hits against the Nationals in a 3-0 loss. It also came on a night when Hays was the leadoff hitter because centerfielder Cedric Mullins was given the night off against Nationals left-hander Patrick Corbin. Hays’ final at-bat came with two outs in the sixth, and after a rain delay. Another rain delay would make it an official game after six innings.

Hays needed a double to complete the cycle, and he needed a couple of runners to get on base in the sixth so that he would hit again. Tyler Nevin singled and Jorge Mateo drew a walk to set up another moment in Orioles history.

“We came back inside [during the rain delay], and it was unclear whether we were going to be able to come back out and finish the game or not,’’ Hays said. “I think I was like six or seven [lineup] spots away, and I wasn’t sure with more rain coming if I was even going to get the opportunity, but a really good at-bat by Mateo right there to draw the walk and get on base and get an opportunity to come up and put that swing on the ball.

“It was crazy. I was definitely thinking about it. I was just thinking about getting a slider that was hanging over the middle of the plate and hitting it to left center. And sure enough, [Steve] Cishek hung a slider right there and I was able to hit the line drive to left center. It was a really cool feeling. Goosebumps hit me right as I was touching second base. Nothing else to do but point up to the sky and thank God for the opportunity.”

Trey Mancini followed Hays’ double with a home run and embraced his teammate at the plate in what was also a special moment.

“I’m so proud of him … that was so cool,” Mancini said, “especially after a tough night last night for him. He just washed it. Came back. That’s what he does. He’s a gamer.”

Watkins might start Saturday: The Orioles haven’t announced their starter for Saturday’s game against the Chicago White Sox, but Spenser Watkins is looking like a strong possibility.

“He is a possibility,” manager Brandon Hyde said. “We wanted to keep him short just because we have an open spot. We’re not sure what we’re doing with our bullpen and rotation right now.”

Bannon comes home:  Infielder Rylan Bannon was excited about the trip to Chicago. Bannon is from Joliet, Illinois, about 30 miles from Guaranteed Rate Field. Bannon, who hasn’t played since he was recalled from Norfolk on Tuesday for his second stint with the Orioles, bought 12 tickets for family and friends. He grew up a Cubs fan and remembers attending just one White Sox game. His wife’s family were White Sox fans.

The right-handed Bannon might not see much action this weekend. The Orioles are facing four right-handed starters.

“I’m just trying to match up and win the game,” Hyde said. “Rylan had a nice last week in Triple-A before he got here. He’s available off the bench for us. Unfortunately, we did have to reduce the pitching [staff] down to 13. I’m encouraged by the year he was starting to have in Triple-A and maybe you’ll see him in the next couple of days.”

Hyde would like to allow Bannon to play in front of family and friends if the matchups are right.

“I think you always want to try and think about players and make guys feel good,” Hyde said. “You want their families to see them. Ultimately, the team is my number one responsibility, and for me to match up the best way I possibly can and give our team the best chance to win. Hopefully, those things combine and both can work out.”

Dorrian traded to Brewers:  The Orioles traded minor league infielder Patrick Dorrian to the Milwaukee Brewers for cash considerations on Thursday. Dorrian came to the Orioles from Pittsburgh in June 2019 in exchange for pitcher Yefry Ramirez.

Dorrian, who hit 22 home runs and drove in 67 runs with a .243 average for Double-A Bowie last year, came to spring training with the Orioles but hit only .161 with three home runs and 15 RBIs for Norfolk. He was hitless in one game for Bowie.

Notes: Nick Vespi pitched the sixth inning on Wednesday night and recorded his first save. … The Orioles don’t have a taxi squad for Thursday night’s game. Hyde said there would be one for Friday.