Hays hits for cycle in Orioles' 7-0 win over Nationals - BaltimoreBaseball.com 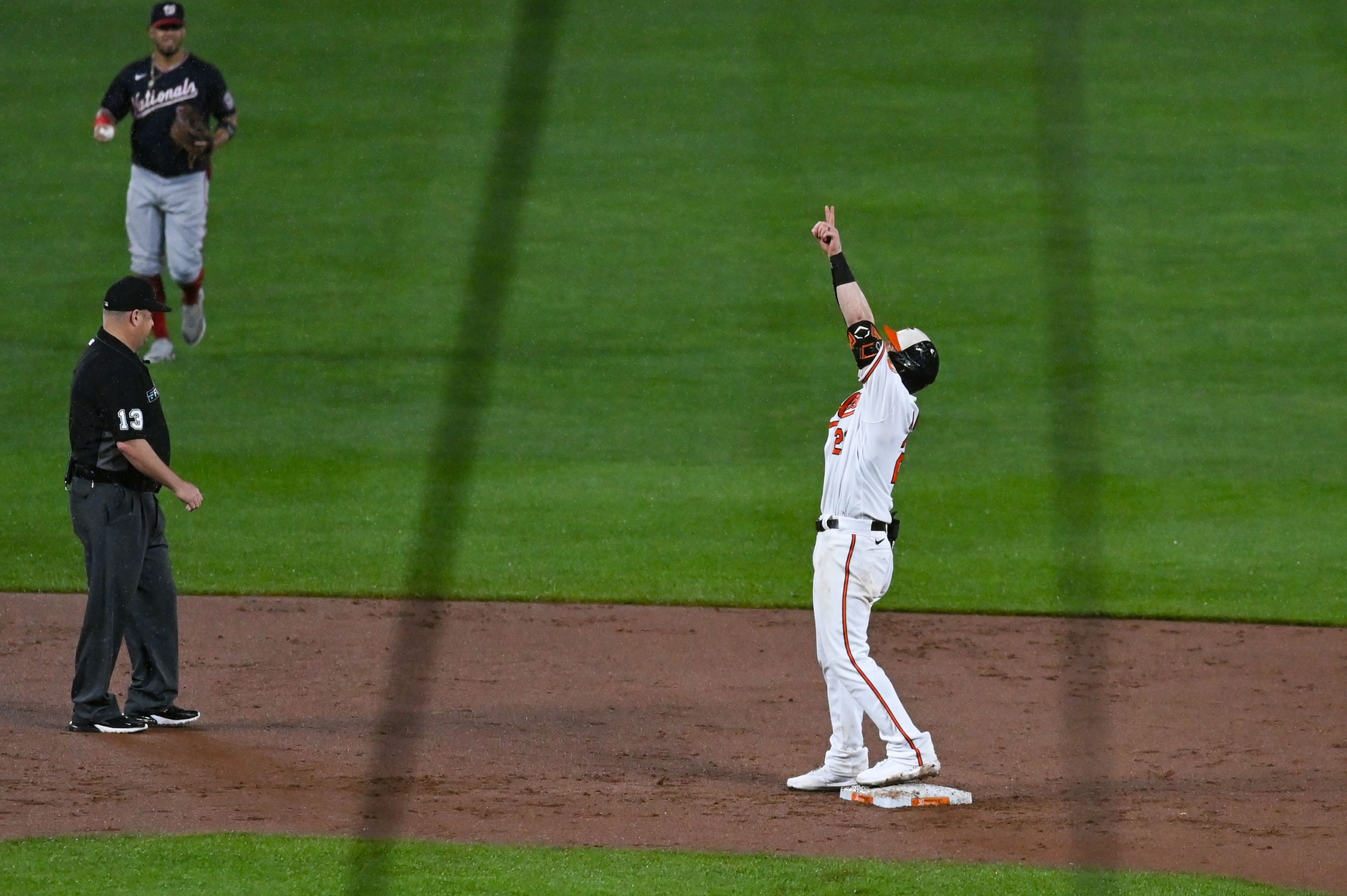 When a hard rain began to fall at the end of the fifth inning of Wednesday night’s game between the Orioles and the Washington Nationals, it looked like the storm might wash out more than the final four innings of an otherwise non-descript game between two fifth-place teams.

Outfielder Austin Hays was sitting on a three-hit performance and they weren’t just any three hits. He had a single in the first inning, a long home run in the third and a triple in the fourth, which put him just a double away from becoming only the sixth Oriole to hit for the cycle in the 69-year history of the Baltimore franchise.

The forecast wasn’t good, but maybe the baseball gods recognized that something very special had a chance to occur and convinced Mother Nature to relent just long enough to get Hays back to the plate one more time. The rain slackened enough for the game to resume after a 44-minute delay and Hays launched a long two-run double to left-center field to help break open a low-scoring game and become the first Oriole to complete the rare feat since Jonathan Villar did so against the Yankees on August 5th, 2019.

It was the fourth cycle in the big leagues this season and the third this month. Milwaukee Brewers star Christian Yelich turned the trick for the third time in his career on May 11th, Mets infielder Eduardo Escobar did it June 6th and Angels first baseman Jared Walsh joined the fun on June 11th.

Moments after Hays’ double off Nats reliever Steve Cishek ignited an enthusiastic ovation from what remained of the announced crowd of 12,630, Trey Mancini put an exclamation point on the rain-shortened 7-0 victory with the Orioles’ third home run of the game, then wrapped Hays up in a warm embrace when the two reached home plate.

Timing obviously is everything. The rain intensified as the four-run sixth inning came to an end and the tarp came back out. It would eventually subside again, but after a second delay that lasted just more than an hour, the game was declared official.

Of course, it was the first delay that held Hays in suspense.

“We came back inside and it was unclear whether we were going to be able to come back out and finish the game or not,’’ he said. “I think I was like six or seven [lineup] spots away and I wasn’t sure with more rain coming if I was even going to get the opportunity, but a really good at-bat by Mateo right there to draw the walk and get on base and get an opportunity to come up and put that swing on the ball.

“It was crazy. I was definitely thinking about it. I was just thinking about getting a slider that was hanging over the middle of the plate and hitting it to left center. And sure enough, Cishek hung a slider right there and I was able to hit the line drive to left center. It was a really cool feeling. Goosebumps hit me right as I was touching second base. Nothing else to do but point up to the sky and thank God for the opportunity. It was a really cool moment.”

Hays continues to improve on last year’s breakout performance. The home run was his 10th of the season and the two-run double jacked up his team-leading RBI total to 40. The four hits raised his batting average to .287. Could there be an All-Star appearance in his future?

Manager Brandon Hyde thinks there are a number of Orioles who deserve All-Star consideration and considers that a sign that his team is turning a competitive corner.

“It’s always a positive to have guys that are being considered to be in the All-Star Game,’’ Hyde said before the game. “I hope that people get out and vote for those guys. We have a few bullpen guys who should get the opportunity also. Yeah, I’m really happy with how a lot of these guys have played in the first half and hope they get the consideration they deserve to be in the game.”

For Oriole starter Tyler Wells, an impressive first season as a major league starting pitcher continued to unfold with a five-inning performance in which he allowed just three hits and no runs. The victory was his fourth in a row and it came in his 13th straight game allowing three earned runs of fewer – a streak dating back to his April 10th rotation debut during which he allowed four earned runs in the season-opening series against the Tampa Bay Rays.

The rain timed out right for him, too. There was talk before the game about the possibility that Hyde might hold Wells back and turn the whole game over to the bullpen as he did on Sunday against the Rays to avoid wasting his top starter in a quick rainout. Hyde ultimately gave him the ball and the rain held off until he had thrown 95 pitches and completed the required five innings to get his fifth victory of the season.

But all anybody wanted to talk about was the Hays cycle, including Wells, who was quick to point out that Hays already had made a big contribution to the victory before he got to the plate for the first time, when he made a terrific throw to catch Juan Soto trying to go from first to third on a one-out single by Josh Bell.

“It’s a pretty special night,’’ Wells said. “He’s been great all year and to be able to put another one up there on the accolades. He came up with a great defensive play for me tonight, so to be able see him have such a big night, it is really special. He’s been tearing up this year so hopefully we’ll get to see him in the All-Star Game.”

Mancini, who is having a pretty good season himself, clearly was thrilled for Hays and said that was the biggest home plate hug he can remember giving anyone.

“I’m so proud of him … that was so cool,” Mancini said, “especially after a tough night last night for him [four strikeouts]. He just washed it. Came back. That’s what he does. He’s a gamer. He’s just the epitome of a gamer and a professional. He always grinds every at-bat out and we saw tonight what can happen when you do that. So, I’m so proud of him and so happy for him. That was awesome.”

Harvey set for rehab assignment: Matt Harvey, who’s serving a 60-game suspension for distribution of opioids, will begin a rehab assignment on Thursday night for High-A Aberdeen at Wilmington. Harvey, who was signed to a minor league contract on April 8th, can join Triple-A Norfolk’s active roster on July 8th.