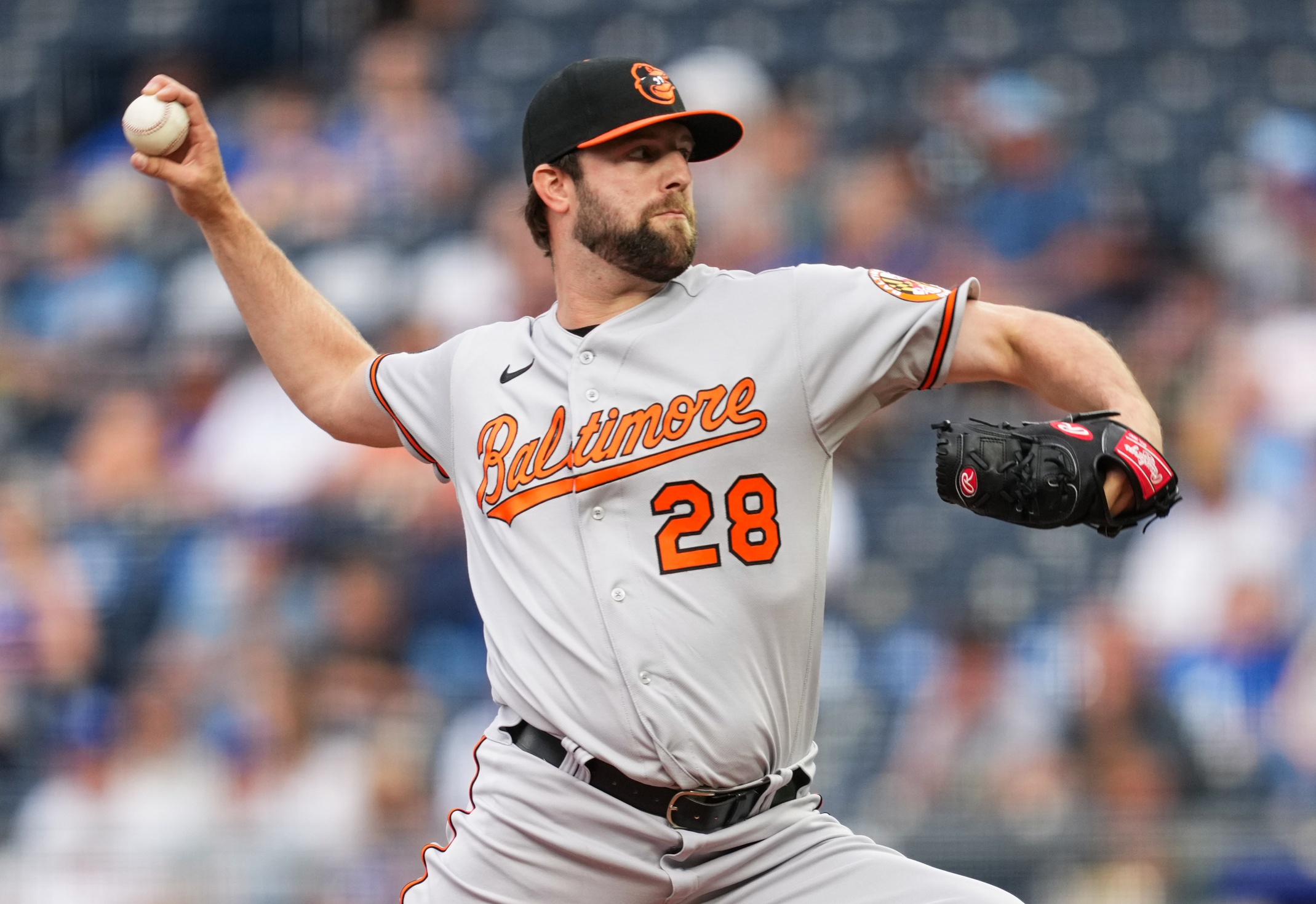 KANSAS CITY—Pitcher Jordan Lyles has given the Orioles length this season and managed to keep his team competitive in most starts. That wasn’t the case on Thursday night as Lyles matched his season high by allowing six runs and giving up eight hits, a season high as the Orioles lost to the Kansas City Royals, 7-5, before an announced crowd of 15,594 at Kauffman Stadium.

Jorge Mateo singled against Kris Bubic to lead off the third. He stole second and advanced to third on a wild throw. He scored on Trey Mancini’s grounder to short with one out, but Mancini was tagged out after he made a wide turn past first.

In the bottom of the third, the Royals scored four runs against Lyles (3-5) Salvador Perez’s long single to left scored Whit Merrifield and Bobby Witt Jr. MJ Melendez’s fifth home run of the year scored Perez, and the Orioles trailed, 4-1.

“I thought he got some balls elevated there in the third inning, put a big number up,” Orioles manager Brandon Hyde said. “Nice that we tied it there. Just couldn’t get the shutdown inning there in the fifth.”

The Orioles (24-34) got four straight hits in the fifth. Austin Hays had an RBI single, and Ryan Mountcastle hit a two-run double to tie the score at 4.

Carlos Santana’s third home run of the year to right field broke the tie and gave Kansas City (19-37) a 6-4 lead after five.

“Not good,” Lyles said. “Fell into some trouble in the third, a couple of bad breaking balls over the plate. A couple of balls hit hard and then the fifth, I gave up the two-run shot, just a front hip sinker that I thought we could get one by him … It was just a bad pitch. Overall, not good.”

Lyles’ ERA has risen to 4.97. In his previous start, he gave up five runs, four earned, on nine hits in five innings against Seattle on June 2nd.

“The combination of multiple bad pitches throughout the whole night,” Lyles said. “I didn’t enjoy the way things went on my end. Need to be better and we’ll figure it out between starts and try to get rid of this little tough stretch I’ve been through.”

Witt’s sacrifice fly in the sixth put Kansas City ahead, 7-4.

In the top of the eighth, the Orioles had runners on first and second with one out. Adley Rutschman, who didn’t start the game, pinch-hit for Mateo, and flied to left. Cedric Mullins’ double scored Rougned Odor. Mancini walked to load the bases, and Hays grounded into a force play at third, and the Orioles trailed. 7-5.

“We battled back again. We had an opportunity there in the eighth inning with the right guys coming up. Haysy hit that ball hard, just right at them,” Hyde said. “We were one big hit away in the eighth to really make it, to give ourselves a better chance.”

Nevin singled with two outs in the ninth against Scott Barlow, but Odor popped out to end it. The Orioles left 11 runners on base.

Minor league update: Third baseman Jordan Westburg drove in three runs and hit a two-run home run, his first since his promotion to Triple-A Norfolk, in the Tides’ 5-4 win over Nashville in the first game of a doubleheader. Catcher Jacob Nottingham hit his eighth home run.

Richie Martin drove in two runs and Brandon Knight (1-2) pitched 3 1/3 hitless innings as Norfolk completed the sweep with a 5-3 win in the second game.