Mancini hits the wall again, then finds the bullpen as Orioles hit 4 homers in 9-2 win over Mariners - BaltimoreBaseball.com 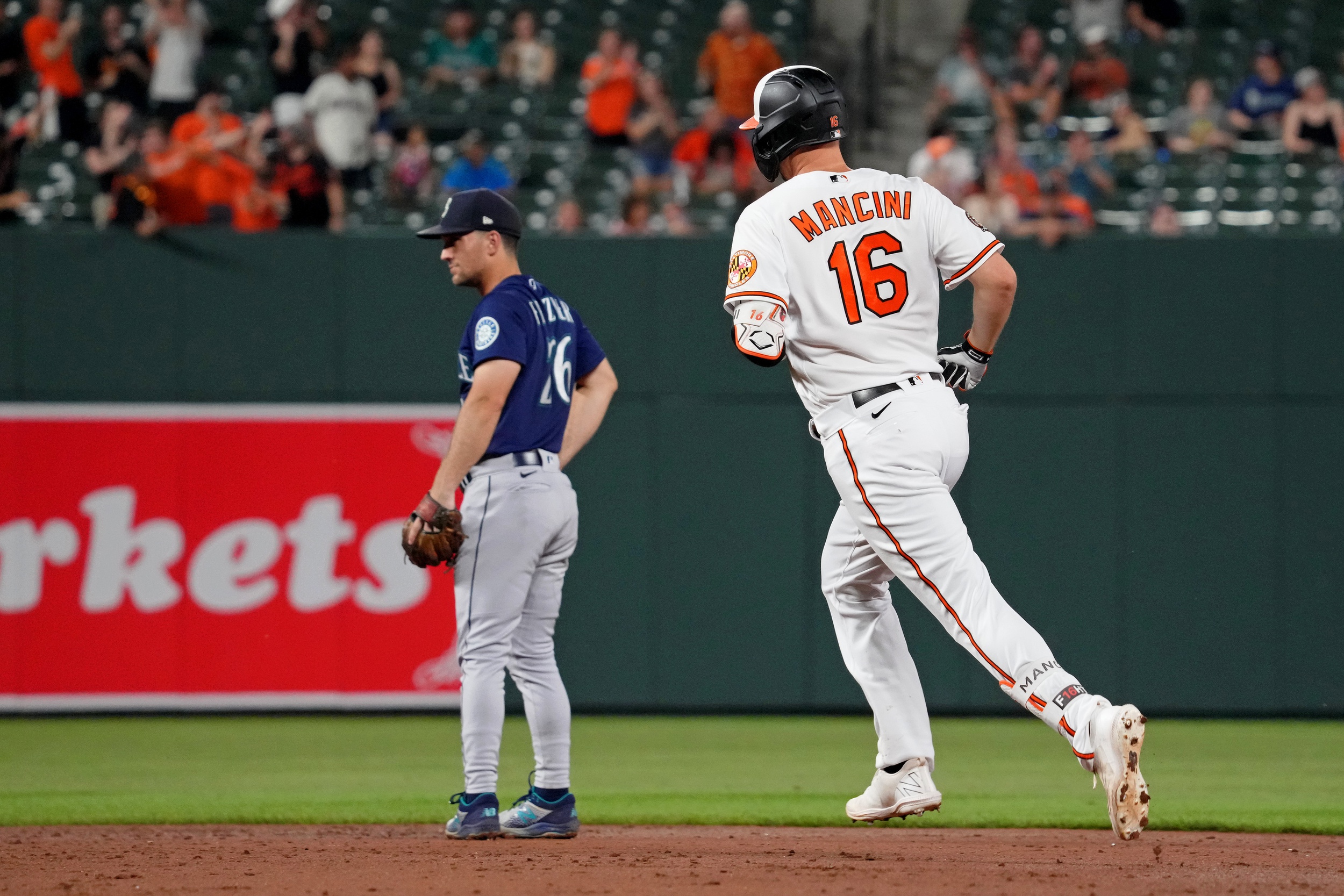 First baseman Trey Mancini would love to stop talking about the new wall in left field, if only it would stop tormenting him.

Once again, the new fence dimensions at Oriole Park came into play during the O’s 9-2 bounce-back victory over the Seattle Mariners, which was a source of visible frustration when Mancini’s mammoth line drive in the fifth inning hit just a foot or so below the top of the wall 400 feet away and he had to settle for a double.

Fast forward to the next inning, when Mancini had to watch Ryan Mountcastle and Ramon Urias slam back-to-back homers over that same wall and then congratulate both of them when they returned to the dugout. He knew he was in for a ribbing from Mountcastle, and it was obvious from afar that they had a laugh or two at his expense.

“Yeah, just got to hit it a little higher,” Mancini said afterward.

Or he could just walk up to the plate later in that sixth inning and drive a ball into the bullpen – just a few feet to the right of where his previous shot caromed back into play.

His fourth home run of the season gave the Orioles three homers in the same inning for the first time since they turned the hat trick against the Atlanta Braves on September 14th, 2020. Mountcastle took part in that one, too, along with DJ Stewart and Jose Iglesias.

“I think I’ve said enough about the wall,’’ Mancini said. “I’ve made it pretty clear and I was maybe planning to say more and then Mounty and Ramon go over it immediately after I hit it off the wall.”

His teammates tried to be gentle after the initial blast, which Mancini said was about as hard as he can hit a baseball. Once he joined the homerfest, they got after him pretty good.

“It just seems like he’s hitting so many balls hard and none of them were going over the fence and he finally got one,” Mountcastle said. “When he hit the one off the wall, off the bat I thought it was way gone. For him to get that one [in the sixth inning], that was big.”

The Orioles hit four homers in all. Second baseman Rougned Odor hit a towering three-run shot onto the flag court off Mariners starter Robbie Ray in the second inning to put his team in front, but the Mariners chipped away at O’s rookie Kyle Bradish for a run in the fourth and another in the fifth.

Bradish was coming off the worst start of his young major league career. He had given up six earned runs in just 1 2/3 innings against the Red Sox on Friday, the game in which the O’s scored 10 unanswered runs in the final three innings to score a very unlikely 12-8 comeback victory.

This time, he allowed just a couple of walks and a single through the first three innings and pitched into the fifth in an 80-pitch effort that more than satisfied manager Brandon Hyde, who had predicted that he would rebound from that ugly performance at Fenway Park.

“Really impressed,” Hyde said. “He was throwing 98 miles per hour in the first inning. There was some intent there with every pitch. I thought his command was much better than his last start. I thought his stuff was really good. Kyle’s going to be a really good starting pitcher in this league, and he’s a tough at-bat. He did a really good job. Walked a couple of guys and punched out six.”

Hyde was also beaming after his team once again showed that it takes lopsided loses personally. The Orioles were trounced 10-0 on Tuesday night and came back to blow out the M’s. When they were similarly embarrassed in a 12-2 loss in Boston last week, they came back to drop a 10-spot on the Red Sox the next day.

“That was a bad feeling last night,’’ he said. “I think that left a bad taste in everybody’s mouth. It started out in the beginning of the game and I think we kind of all just sat in it for awhile and, like I said, when you have a game like that, it’s about the starting pitcher the next day and Kyle Bradish was outstanding early in the game.”

Mancini wasn’t surprised that his team continues to show resilience as the Orioles navigate a grueling stretch in one of baseball’s toughest schedules.

“I think one of the biggest differences with this team, is we lose 10-0 last night … really tough games … and we come back today and we washed it,’’ he said. “I think in years prior we let things like that bleed into the next few days too many times and that hasn’t been the case at all this year. I’m really proud of this team the way we respond the next day after those tough days.”