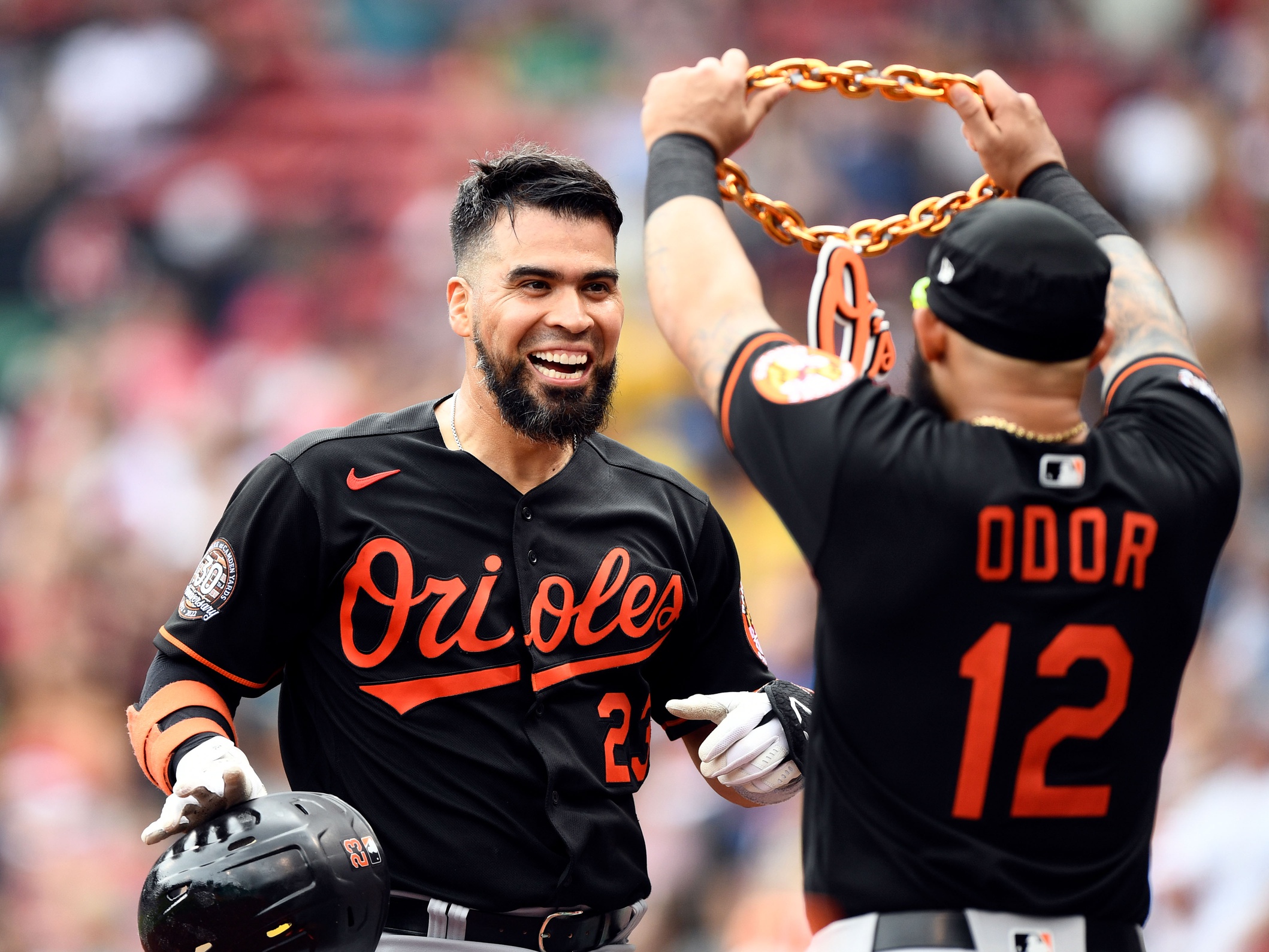 After Friday night’s thrilling, 12-8 comeback win over the Boston Red Sox, the Orioles had their most effective starter, Jordan Lyles, going in the first game of Saturday’s day/night doubleheader. But Lyles threw just 4 1/3 innings, the fewest in any of his 10 starts this season, and the Orioles lost to the Red Sox, 5-3, at Fenway Park.

The score was 3-3 when Lyles, who allowed three runs on nine hits and threw 93 pitches, left the game. He and manager Brandon Hyde acknowledged that Saturday was a struggle.

“I just didn’t think he had his best stuff today,” Hyde told reporters in Boston about why he pulled Lyles with one out in the fifth. “He had a really long second inning there, I think a 40-pitch second inning. He got some bad breaks.”

“Really happy with how competitive he was, pitching into the fifth inning,” Hyde said. “Obviously, tough lineup, tough ballpark to pitch into today. He gave us a chance.”

Keegan Akin (1-1), who finished the fifth with runners on first and third without giving up a run,  allowed a sixth-inning home run to pinch-hitter Bobby Dalbec and a run-scoring single to Christian Arroyo in the seventh. Dalbec’s home run was just the second home run allowed by Akin in 31 2/3 innings.

Oriole catcher Robinson Chirinos hit a two-run home run, his second, to tie the score at 3 in the fifth against Boston starter Nathan Eovaldi (2-2).

Eovaldi threw his first career complete game and is 8-2 against the Oriioles (19-28). He was still throwing 98 miles per hour in the ninth.

“He’s got really good stuff and we have a tough time with him almost every time out,” Hyde said.

Game 2 is scheduled for a 6:10 p.m. start. Denyi Reyes, who threw two perfect innings in his only appearance with the Orioles on May 13th, is scheduled to start against Josh Winckowski, who will be making his major league debut.

Reyes was added as the 27th man for the doubleheader

Sedlock’s arrival: Nearly six years after he was the Orioles’ first-round draft choice in 2016, pitcher Cody Sedlock was finally placed on a major league roster on Saturday.

The 26-year-old right-hander, who was 2-1 with a 5.83 ERA in eight games for Triple-A Norfolk, had never been on a 40-man roster and was finally invited to major league spring training this year.

Injuries and performance have delayed Sedlock’s arrival. The Orioles are eager to see if their older prospects can be contributors. Earlier this month, the team recalled infielder Rylan Bannon for a few days when they were short on position players.

Sedlock, who was in the bullpen for Saturday’s first game, might not stay long. Beau Sulser, whom the Orioles claimed off waivers on May 14, was optioned to Norfolk. Sulser allowed two runs on seven hits in three innings on Friday night.

To make room for Sedlock on the 40-man roster, the Orioles designated infielder Jahmai Jones for assignment. Jones had Tommy John surgery on Friday.

Jones, who was acquired by the Orioles from the Los Angeles Angels on February 2, 2021 in exchange for starter Alex Cobb, hit .149 with three RBIs in 26 games with the Orioles.

About streaming: Many fans were upset that they missed the Orioles’ exciting comeback win on Friday night because the game was streamed on Apple+TV and not shown on MASN.

A number of viewers complained because they subscribe to a cable service just to watch Oriole games.

This season, Major League Baseball signed two agreements for weekly streaming games. The Apple+TV agreement is for a weekly Friday night game and gives MLB exclusive rights to the game.

Oriole fans who normally watch on MASN and Red Sox fans, who watch on NESN, had to sign up for Apple+ to watch the game. Apple did offer a free one-week trial to watch the game, but fans have to cancel by Thursday to avoid being billed.

The other agreement is with Peacock, and the Orioles will appear on a Sunday game against the Los Angeles Angels on July 10th at noon. That game won’t be on MASN, either.

While the Apple+ games don’t affect the non-participating teams, the Peacock game does. Their games begin at either 11:30 a.m. or noon, and MLB has agreed to delay any other Sunday starts until 1:35 p.m. That’s why most Orioles’ Sunday starts were moved from 1:05 p.m. to 1:35 p.m.

Notes: Rougned Odor’s career-long 11-game hitting streak ended. …Adley Rutschman, who’ll catch Game 2, missed his first game since being promoted a week ago. … On May 23rd, Austin Hays reached in the fifth inning on what was scored an error by New York Yankees first baseman Anthony Rizzo. That has been changed to a hit.