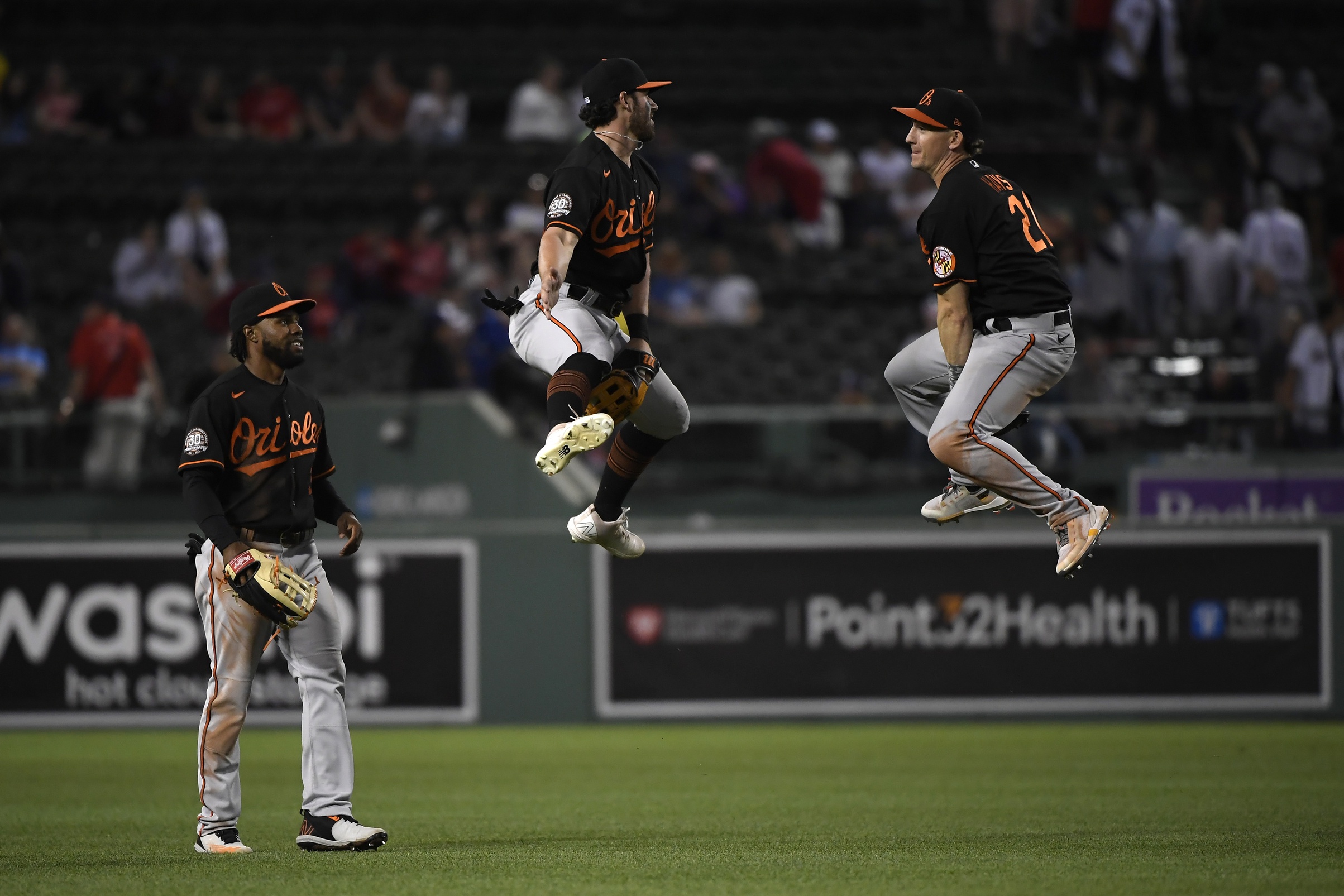 In a month with some exciting, tense wins, the Orioles pulled off an unlikely one. Trailing the Boston Red Sox at Fenway Park by six runs in the second inning, the Orioles scored 10 runs in the final three innings for a 12-8 win in the first game of a five-game series on Friday night.

Kyle Bradish allowed six runs in 1 2/3 innings, and the bullpen needed to cover 7 1/3 with a Saturday doubleheader looming.

The Orioles hit three home runs to close to within 8-7.

Cionel Pérez (3-0), the fifth of six relievers, recorded the final out of the eighth.

Santander’s RBI single, a wild pitch, a sacrifice fly by Ryan Mountcastle and a run-scoring single by Rougned Odor produced the runs  in the ninth.

Lyles’ deep starts: In four of his previous five starts, Jordan Lyles has completed at least six innings. A deep start will be vital in at least one game of Saturday’s day/night doubleheader against the Boston Red Sox. The first game begins at 12:10 p.m. The second game will start at 6:10 p.m.

“A little bit old school,” Lyles said. “I still like the new things about today’s game, the numbers, analytics, pitch shaping. I’m a little bit of both.

“That older mentality just stems from being in the bullpen a little bit in my career and knowing how much it means to those guys out there when the starting pitchers can scratch out another inning or so for them.”

Saturday will be Lyles’ 299th game, but from 2016-2018, Lyles was primarily in the bullpen for Colorado and San Diego. Lyles has pitched just one complete game in his career, in 2012 for Houston, but as the 31-year-old seems to have gotten better with age. On May 8th, he threw 7 1/3 innings against Kansas City, the deepest start of his career since May 15, 2018.

“I don’t think there’s one single thing I could point my finger at,” Lyles said. “I’m learning as we go. I enjoy the little things about trying to get better day in and day out, working on stuff in between starts. Pitch repertoire-wise, I’ve incorporated a couple of different pitches so I’m able to use more weapons now. Variety-wise I have more things I can lean on to get guys out as opposed to two years ago, a big chunk of my pitches were four-seam, curve ball off of that. Now, I’m throwing a little bit of everything.”

“I think, first and foremost, how to be a professional in between starts,” he said. “How to go about their business, having those small conversations with them in the dugout when neither one of us is pitching, and then just building a relationship there.

Double-A Bowie was held to just two hits as the Baysox lost to Erie, 5-0, in a game shortened by rain to 5 ½ innings. It was Bowie’s sixth consecutive loss. Garrett Stallings (2-3) allowed five runs on eight hits, striking out five without walking a batter.

First baseman Jacob Teter hit a two-run, ninth-inning home run to lead High-A Aberdeen over Wilmington, 5-4. It was Teter’s fourth home run of the season. In his first game since he joined the IronBirds, Alex Pham (1-0) allowed a run on two hits in three innings.

Notes: Infielder Jahmai Jones, who was at Norfolk, had Tommy John surgery on his right arm on Friday. The surgery, which the Orioles say was successful, was performed in Cincinnati by Dr. Timothy Kremcheck. … Catcher Anthony Bemboom, who was designated for assignment on May 21st when Adley Rutschman was added to the roster, has cleared waivers and was assigned outright to Triple-A Norfolk, according to the MLB.com transactions log. … Catcher Cody Roberts and pitchers Denyi Reyes and Cody Sedlock are on the taxi squad for this series.

A personal note: I tested positive for Covid-19 on Thursday and wasn’t able to make the scheduled trip to Boston for this weekend’s series. I’ll be writing from home.

Todd Karpovich and Peter Schmuck will cover the home series against Seattle and Cleveland, and I look forward to coming back late in the next homestand.