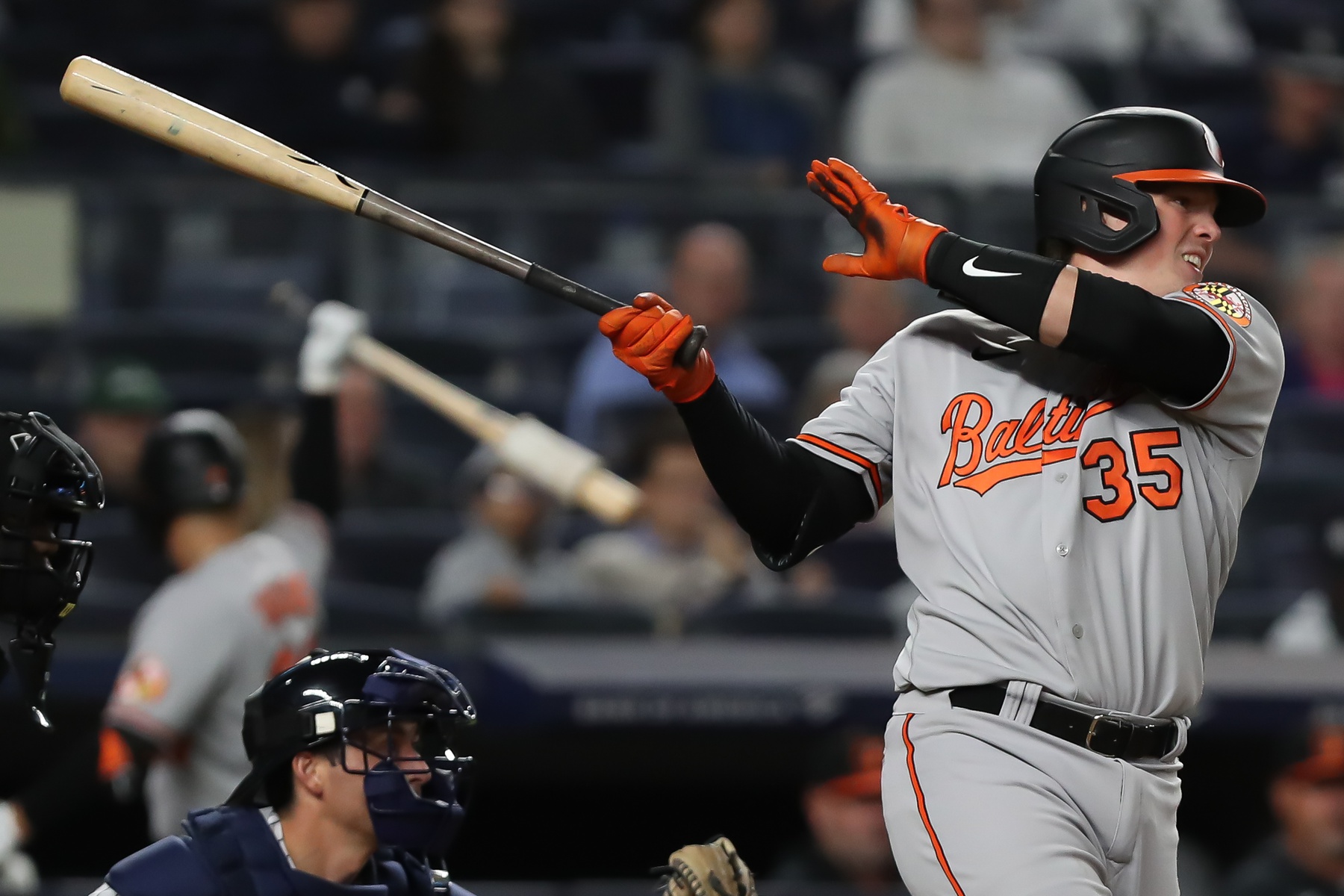 NEW YORK—The Orioles had two runners on in both the first and second innings. They didn’t score in either inning and had few baserunners after that.

Yankee pitching limited the Orioles to five hits, two by catcher Adley Rutschman, in a 2-0 win before an announced crowd of 39,154 at Yankee Stadium on Wednesday night.

In the first inning, Cedric Mullins walked, and Trey Mancini grounded to short, but Isiah Kiner-Falefa’s toss to second baseman Gleyber Torres was dropped for an error. The Orioles didn’t score.

Nor did they score in the second when Rutschman singled on a 10-pitch at-bat to begin the inning. Playing his 1,000th major league game, Rougned Odor walked, and both runners stayed put.

In the third, a single by Austin Hays was their only baserunner. In the fourth, they were retired on just four pitches.

The offensive ineptness wasted another solid starting effort by Tyler Wells (1-4), who allowed one hit in the first three innings. In the bottom of the fourth, Aaron Judge doubled and, with one out, he moved to third on a single by Torres. A single by Miguel Andujar scored Torres. With Joey Gallo at-bat, Andujar broke for second, and Rutschman threw the ball into center for his first error. Torres scored to give New York a 2-0 lead.

“Going into that fourth inning. I just made a couple of bad pitches,” Wells said. “I wouldn’t like to say fatigue was kind of settng in in the fourth inning, but that is no excuse to make pitches right down the middle. I definitely feel like I was a pitch away, and all I need is better quality pitches.”

“His stuff was good tonight,” Rutschman said. “He was able to locate his pitches, move his fastball around. I think he looked really good.”

In the last of the fifth, with Kyle Higashioka on second and two outs, Judge lined a ball to right, and Anthony Santander made an excellent diving catch to prevent the Yankees’ lead from getting any larger. Wells was among those who applauded Santander’s outstanding play that ended his night.

Wells, who allowed two runs on five hits in five innings,  is 0-1 with a 2.57 ERA in three starts against the Yankees.

“It’s just attacking them,” Wells said. “There really is no other way to go about it. They’re a great ballclub. They’ve got a lot of phenomenal, veteran guys on that team who have solid approaches. They know what they’re going to do.

“I was telling some of the guys in the dugout, Aaron Judge is probably the hardest guy in the league to face. He covers so much ground. He covers from his shins all the way up to his head. He can cover in he can cover out. It’s a very difficult thing when you have a lot of guys like that in the lineup to face, so I keep trying to attack, and trying to let them get themselves out. So far, I’ve fared well.”

“We just didn’t score,” manager Brandon Hyde said. “We couldn’t put at-bats together with runners in scoring position, which really cost us the game.”

Rutschman is hitting .250 in his first five games.

“Adley was great back there,” Wells said. “Me and him were on the same page most of the game. He received really well. He blocked really well. He’s definitely a great catcher to have behind the plate as far as presence. He’s a wide guy, so he gives a wide target. Coming up to us at the end of each and every inning is really a nice touch. It really builds a bond between pitcher and catcher.”

Hyde has been impressed with Rutschman’s at-bats.

“He controls the strike zone,” Hyde said. “For the most part, he swings at strikes. He puts good swings on strikes. He had good at-bats tonight. We just need more of that. We need guys to be able to get in hitter’s counts, and tonight I think we left the zone … a lot of popups, a lot of at-bats we gave away.”

“I thought he threw the ball really well tonight,” Hyde said. “I thought Tyler Wells had the best stuff he’s had this year.”

The Orioles have Thursday off and begin a five-game series at Fenway Park against the Boston Red Sox on Friday night.

“We’ll take it,” Hyde said of the offday. “It’s been a long stretch. I think it might have affected some guys. I thought we played a little tired, and the day off comes at a good time.”

Connor Gillispie allowed one run on one hit, walking five and striking out four, as High-A Aberdeen lost to Wilmington, 2-1, in 10 innings.

In his first professional appearance, Carter Baumler allowed one hit in three scoreless innings, striking out five and walking one as Single-A Delmarva lost to Charleston, 5-3. Baumler was the Orioles’ fifth-round choice in 2020 and had Tommy John surgery in October.

Norfolk’s game against Gwinnett was rained out.