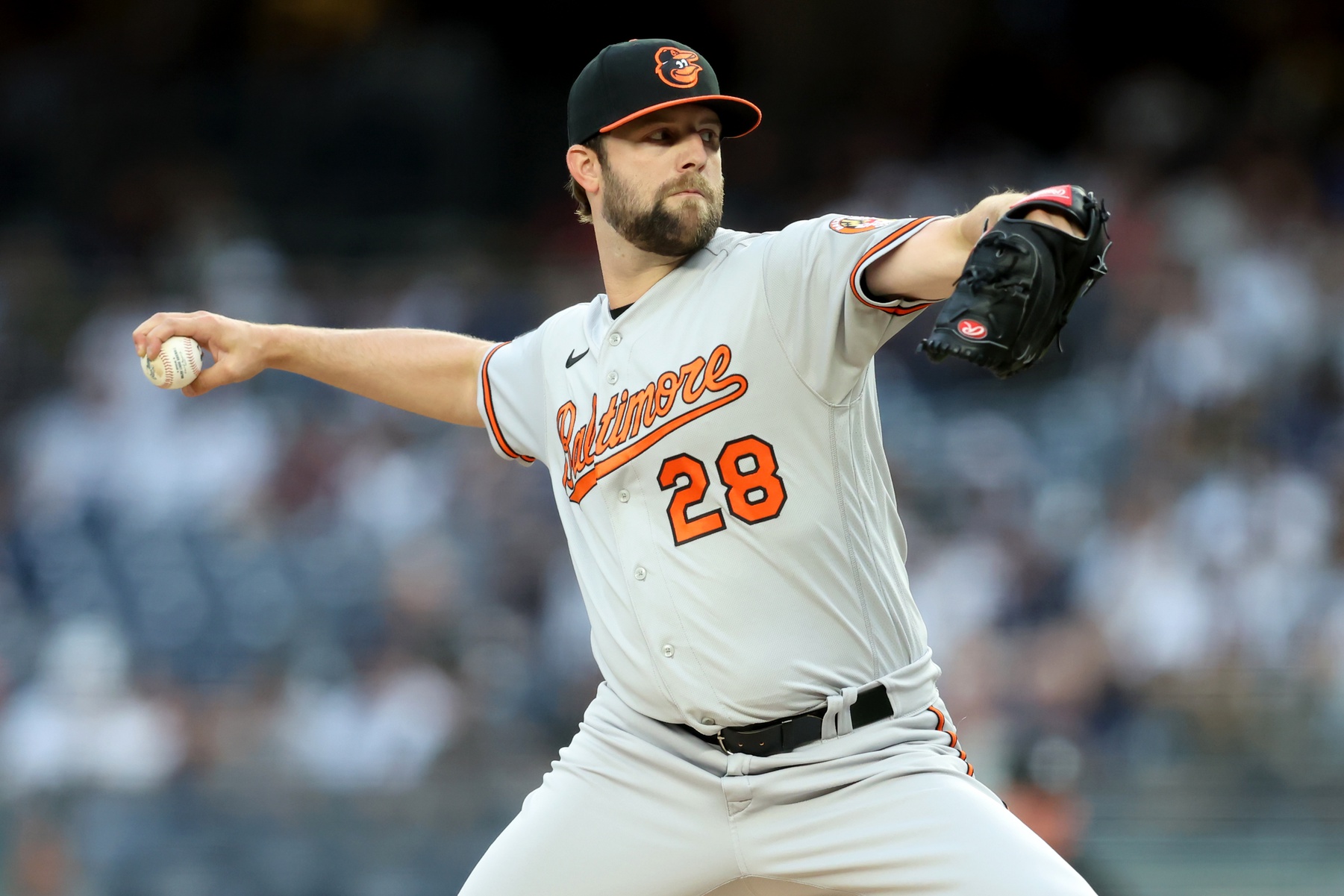 NEW YORK—Orioles manager Brandon Hyde walked to the mound with two outs in the seventh inning. Starting pitcher Jordan Lyles had gone through the New York Yankees batting order three times, and he told Hyde he wanted to finish the inning.

Hyde left Lyles in to face Anthony Rizzo, who blooped a single to left. Félix Bautista came in to face Aaron Judge, who homered twice against Lyles. Bautista walked Judge but struck out Giancarlo Stanton, and the Orioles were on their way to a gritty 6-4 win before an announced crowd of 32,178 at Yankee Stadium on Monday night.

Lyles threw 117 pitches and allowed four runs, one unearned, on five hits in 6 2/3 innings, striking out eight and walking two.

“On a night we needed it,” Hyde said. “I was happy with the length he gave us tonight, how he threw the ball.”

Lyles has given the Orioles quality starts in four of his last five starts.

“He wanted to stay in the game,” Hyde said of his mound visit. “Gave up a two-strike, opposite-field single there unfortunately, but good pitch. Good piece of hitting by Rizz that ended his night. Going into the seventh on a night we needed it was huge.”

On Sunday, the Orioles’ bullpen threw 11 innings after Spenser Watkins was hit on the forearm by a line drive off the bat of the Rays’ Ji-Man Choi, the game’s third hitter. Three bullpen reinforcements were brought in for Monday night’s game, none of whom were used.

“That’s what a veteran starter does,” Hyde said. “On a night that you need it, which he’s done a handful of times already this year … he gets into the seventh inning against a really good club.”

Hyde has given Lyles, 31, more leeway than other starters. He pitched for six other teams in 11 years before signing with the Orioles this season.

“I haven’t had a whole lot of veteran starting pitchers in the rotation in my years here,” Hyde said. “With track record, a guy I believe in, a guy that’s going to be honest with me, I’m going to have to more trust, obviously, and hopefully we’ll keep building these guys to be that way. I just haven’t had veteran rotation guys and veteran bullpen guys, to be honest with you.”

“I wanted to try to get deep into the game,” Lyles said. “It was a good ballgame. It was a great game to watch, and hopefully, fans were satisif3ed with what they saw.”

With Lyles (3-4) pitching deep into the game, and Yankee starter Gerrit Cole completing eight for the Yankees, the game had an old-time feeling to it. Cole struck out 11 and didn’t walk a batter.

Bautista retired New York in order in the eighth, and Jorge López worked a hitless ninth for his fifth save after giving up a leadoff walk.

Lyles has earned Hyde’s trust, and the feeling is mutual.

“He’s been amazing,” Lyles said. “I didn’t know much about him before signing with Baltimore. He’s been awesome. Hyder, he’s been everything and more of what I want in a manager to be myself and be free, ask for an extra inning or two here and there. He’s been open. He’s been honest.”

Aaron Judge homered off Lyles with one out in the first. It was his 16th of the season.

Jose Trevino’s RBI single scored Aaron Hicks in the second. Hicks began the inning with a walk, and he moved to third when shortstop Chris Owings couldn’t handle Ryan Mountcastle’s throw from first for an error.

Cole (4-1) retired the first six Orioles, but in the third inning, they scored four runs on five hits. Third baseman Ramón Urías started the rally with a double and scored when catcher Robinson Chirinos followed with double. Cedric Mullins singled to move Chirinos to third. He then stole second to set up a two-run single by Austin Hays. Trey Mancini singled to move Hays to third. Ryan Mountcastle then grounded to third but beat the relay throw to first for an RBI on a fielder’s choice, and the Orioles led, 4-2.

Judge tied the score, 4-4, in the fifth with his second home run after a walk to Rizzo. He leads the major leagues with 17, and it was his sixth in 10 games against the Orioles this season and 32nd in 79 games against them.

But the Orioles also had an offensive hero, if an unlikely one, in Urías, who homered to right with two outs in the sixth against Cole to put the Orioles ahead to stay, 5-4. Urías also had a double and single, his first three-hit game of the season as the Orioles improved their record against the Yankees to 4-7.

“I think the pitching staff has been better,” Urías said. “They’ve given us the opportunity to stay in the game, and I’m happy for them because they’re doing a really good job.”

Rougned Odor singled against Yankee reliever Wandy Peralta to start the ninth, hustled to third on a single to right by Urias and scored on a sacrifice fly to left by Chrinos to give the Orioles a 6-4 lead.

“I thought we grinded out at-bats really well,” Hyde said. “Gerrit Cole has got great stuff. He’s an ace. He’s an ace for a reason. To be able to put some runs up on the board against him, I’m proud of our hitters. They took really good swings against him. We made him work a little bit and had one big inning.”