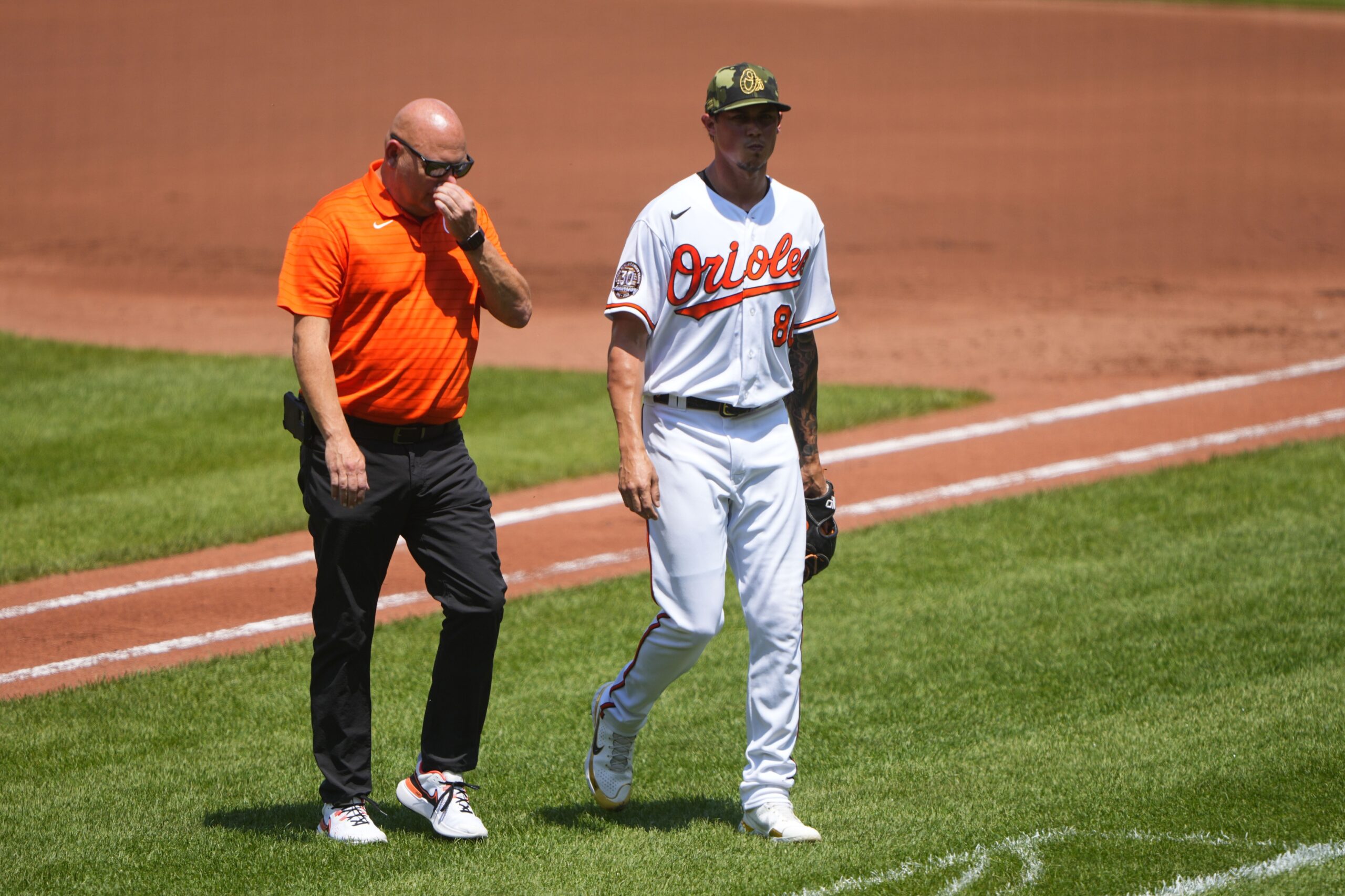 NEW YORK—When Ji-Man Choi, the Rays’ third batter on Sunday, lined a shot off the right arm of Orioles starter Spenser Watkins, manager Brandon Hyde had to go to his bullpen. Hyde used six relievers in the 7-6, 11-inning win over the Rays, leaving the bullpen in tough shape for Monday’s game against the Yankees.

Before Monday’s game, the Orioles placed Watkins on the 15-day injured list because of a bruised right elbow. They optioned right-hander Mike Baumann and infielder/outfielder Tyler Nevin to Triple-A Norfolk. Right-handers Marcos Diplán, Logan Gillaspie and Beau Sulser were recalled from Norfolk.

That will give the Orioles 14 pitchers and three position players. After May 29th, teams will be limited to 13 pitchers.

“We had to make some moves to have some guys available to pitch tonight,” Hyde said. “Our bullpen did such an amazing job yesterday and guys picked up the slack. Some guys I threw in the game yesterday I didn’t want to throw and they ended up going multiple innings on top of that.”

Hyde wanted to give more playing time to Nevin, who was hitting .222 with a home run and seven RBIs. Nevin was with the club on Monday to work out, and he’ll head to Norfolk on Tuesday.

“That was not fun and unfortunate,” Hyde said of Nevin’s demotion. “Hoping he’s back really, really soon. Rosters change here coming up. Nev did a great job. I’m really happy with the progress he’s made. He’s made huge strides defensively. His approach at the plate is improving. I loved the way he was swinging the bat. He’ll be back up here real soon.”

“Feeling a little bit better, but still stiff,” Watkins said. “I didn’t really know what the move was going to be. They didn’t really give me any inclination one way or the other, but they’re going to make the best move for the team, and we’ll go from there.”

Watkins said the injury was just above the elbow, in the forearm. He doesn’t know what the rehab plan is, and thinks he’ll have a better idea in the next day or two.

Sulser is the 28-year-old younger brother of Cole Sulser, whom the Orioles traded to the Miami Marlins last month. He had a 3.72 ERA in four games with Pittsburgh. The Orioles claimed him off waivers on May 14th.

“He had a lot of good things to say about the organization,” Sulser said about his brother. “He loved playing here, and they treated him really well.”

Like his brother, Beau Sulser went to Dartmouth, getting a degree in psychology. “He had a high SAT in high school,” Hyde joked. “A couple of Pirates guys texted me that are friends of mine over there and said really good things about him.”

Sulser looks like his brother, and there are other similarities.

“We both had Tommy John in college. We both were fifth-year senior draft picks. We both went to the same school. We’re both pitchers,” Sulser said. “We both spent five-to-seven years in the minor leagues. Watching him do it, it would have been real easy for a lot of people to walk away with a mechanical engineering degree from Dartmouth.

“Getting your second TJ in pro ball, Single-A, walk away and make some real money. Watching him grind through that, too, to achieve his dream made me want to do the same, keep going until they tell me not to.”

Baumann, who is 1-2 with a 4.91 ERA in six games, threw 3 2/3 innings in relief on Saturday night and wouldn’t be available for several days.

Hyde had wanted Baumann to get regular work at Norfolk after he was originally optioned last month, but there was a need with the Orioles.

“You try to plan things out in this game as much as possible,” Hyde said. The Orioles also wanted outfielder Ryan McKenna to get regular at-bats at Triple-A, but there was a need for him in the majors.

“Mike might be in that category, also,” Hyde said. “We have a plan in place when guys do go down. Then, all of a sudden, a starting pitcher gets hit in the forearm in the first inning, and things rapidly change.”

Norfolk outfielder Kyle Stowers, who hit three home runs on Sunday, was named the International League Player of the Week

The Orioles promoted second baseman César Prieto from High-A Aberdeen to Bowie. Infielder Darrel Hernaiz joins the IronBirds from Single-A Delmarva, as does right-hander Alex Pham. Right-hander Carter Baumler and outfielder Elio Prado were promoted from extended spring training to the Shorebirds. Infielder Shed Long, who signed a minor league contract with the Orioles and has been rehabbing a leg injury at Delmarva and Aberdeen, moves up to Norfolk.